Every year for the past three or four years, I've dutifully ordered bareroot strawberry plants, and every year I plant them. And every year they died.

Besides grasshoppers, deer, and roving cattle, the primary reason they die is our nasty clay soil. We've spent a lot of time amending the garden soil with composted manure, but the spots where I plant the strawberries never seemed to get the good stuff.

So, bottom line, we decided to take an aggressive approach to our small fruits (strawberries, blueberries, raspberries). We built raised beds.

That's all fine and dandy, but what to put IN the raised beds? Our soil is so heavy and clay-y that I didn't want the poor strawberries stuck in that stuff, even if it was amended with composted manure.

So we bit the bullet and bought twelve cubic yards of topsoil. I don't like spending money if we can avoid it, but since we're building long-term permanent beds, we wanted to give the plants the greatest possible advantage. 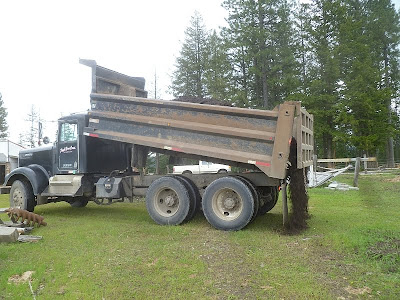 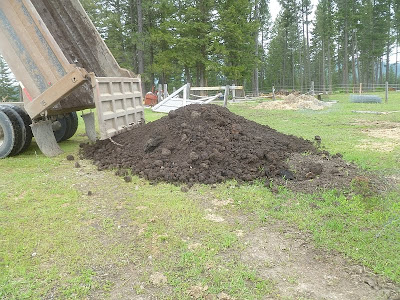 This is river-bottom soil and should make excellent bedding when mixed with composted manure, of which we have (cough) a plentitude.

But before we put the soil in the beds, I wanted to make sure the beds wouldn't be infested with weeds or varmints. The varmints (moles and voles) can be discouraged with hardware cloth, a fine-mesh wire "fence" that is laid down on the ground to keep anything from burrowing up from beneath.

First we measured each bed. 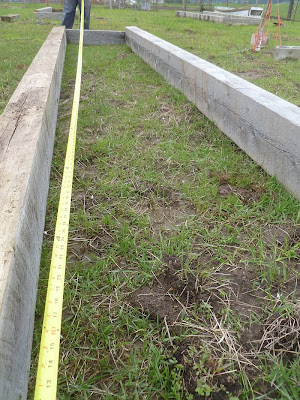 Then we custom-cut the mesh to fit. 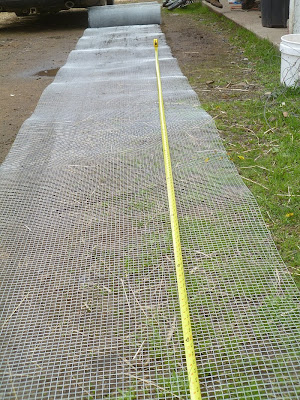 (Don used a saws-all with a metal-cutting blade.) 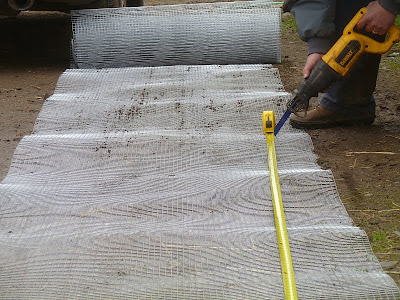 The weeds could be discouraged with newspapers. The prairie grasses around here can be aggressive and strong, so I layered the bottoms of the beds with newspapers, fairly thickly. The day was breezy so I anchored the papers with the mesh as I went. The papers will eventually decompose, but in the meanwhile they will kill the grasses that try to push up through the beds. 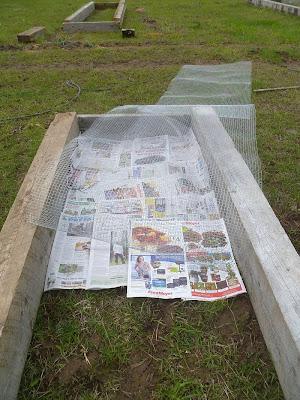 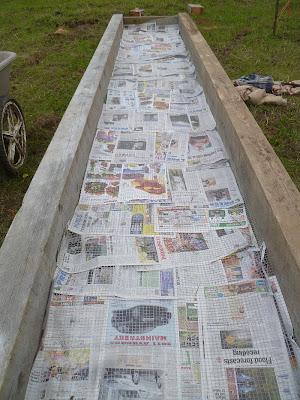 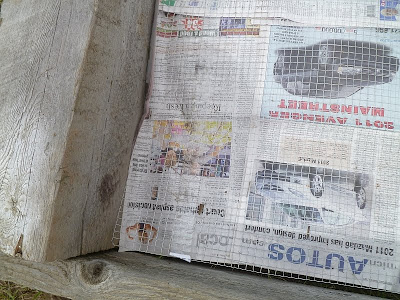 Then I started trundling wheelbarrows of dirt to the beds. 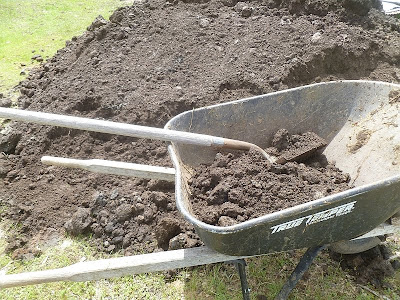 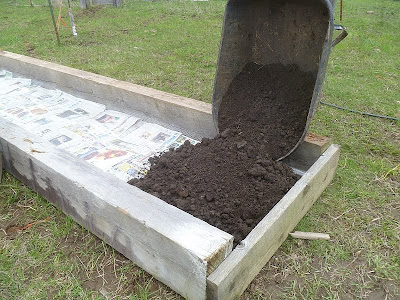 It took five wheelbarrows to fill the beds about 1/3 full.

Next I pitched up some composted manure... 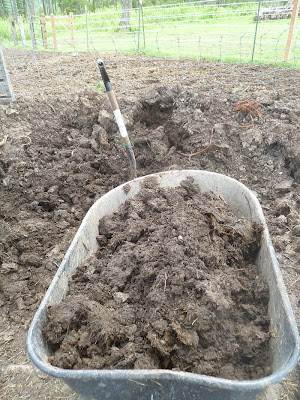 ...which also took five wheelbarrows to spread over the beds. The depth is now 2/3 full. 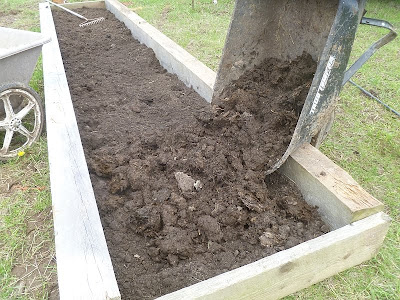 Then I put another five wheelbarrows of topsoil on the top of the manure. The beds are now layered. I decided not to mix the layers because the strawberry roots will easily spread down into the composted manure, maximizing exposure to the nutrients.

Next came preparing the strawberries. Here are the 200 plants. 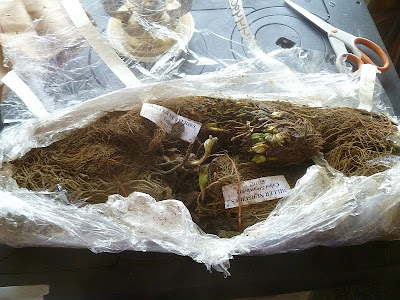 With bareroot strawberries, it's best to soak the roots for awhile to rehydrate them. I plopped them in bowls of water... 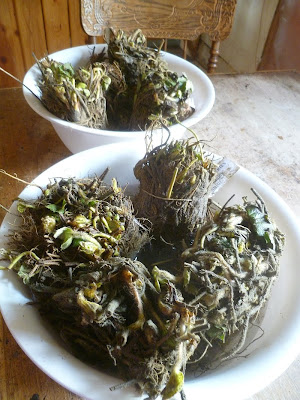 ...while I worked on the second bed. 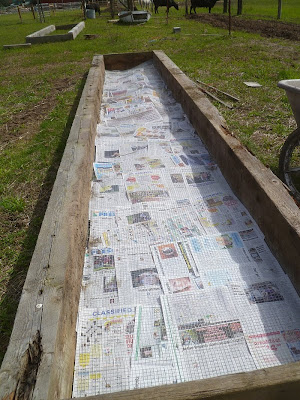 After the strawberry roots had soaked for a couple of hours, I laid them all out in the pattern I would be planting, before doing the actual planting (so I could tweak and adjust the layout as necessary). 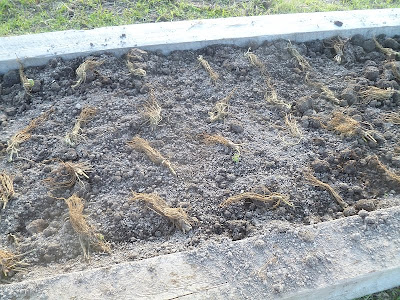 Before planting bareroot strawberries, it is recommended that the roots get trimmed. Don't ask me why, I think it's along the same principle as why you trim the stems of cut flowers before putting them in a vase. Something to do with improved water absorption, I think. 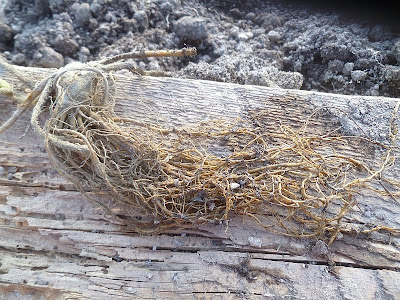 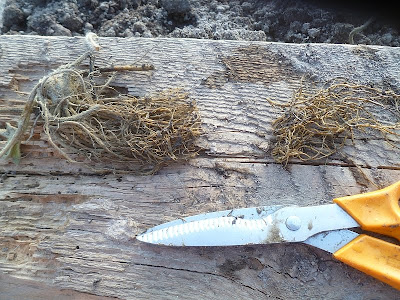 It took a long time to get 200 plants in the ground and my back ached from bending over the boxes by the time I was done. But they're in! And after a nice watering, they're looking rather perky (for bare roots, that is). I'm happy -- it looks like we might have successful strawberries at last! 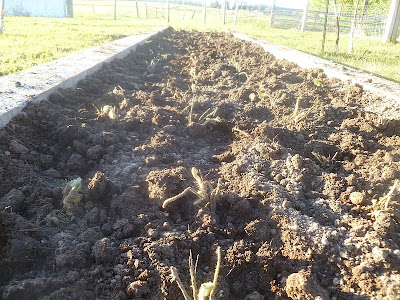 Posted by Patrice Lewis at 2:23 PM