The push to be self-sufficient

Now that summer has, we hoped, arrived (one never knows in north Idaho), I'm rushing to get the garden in. I've finished our strawberry beds and planted 200 bare-root strawberries. Next will be raspberries and blueberries. Vegetables. Hopefully boxes for new fruit trees. Etc.

I have a black thumb, so gardening is a struggle for me. In my humble opinion, it's much easier to raise livestock. But regardless, if we're pushing to make this farm as self-sufficient as possible, clearly gardening must be high on our list of priorities.

This "push" is becoming stronger. I don't like what I'm reading in the news.

Maybe it's because we've been self-employed for the last 18 years, but because our financial foundation has always been precarious, we've learned to value independence and self-sufficiency. A job can disappear. So can our wholesale customers. Nothing is steady; everything is subject to shifts and changes. So we've learned to hang on with the tenacity of barnacles (which produce the strongest glue in nature -- betcha didn't know that!) when it comes to clinging to our rural life and our dreams of producing most or all of what we eat, ourselves.

But it's not just food that concerns us, it's finances. When we first moved to Idaho eight years ago, we searched exhaustively for a piece of land and a house which met our criteria. Eventually we narrowed the choices down to two possibilities: our current home, and a gorgeous place on thirty acres with a year-round creek. But the other location was $80,000 more expensive. At the time our business was doing well and we could have afforded the other place. But we knew finances were shiftable things and we didn't want to put ourselves in a position of being enslaved to a mortgage higher than we could comfortably afford.

That financial caution has served us well as the economy has tanked. I am astounded -- truly astounded -- that our home woodcraft business still has customers. Because I keep expecting those customers to disappear, it has made us doubly cautious with our spending. If we're going to spend money, we will spend it on something we feel will push us toward greater self-sufficiency. Like a Jersey heifer. Like 200 bareroot strawberry plants. Like a hay barn. Like other things we have bought or plan to buy.

We are not the only ones expressing concerns about the economy. Finally, at last, the mainstream media is beginning to admit it as well. CNBC reports that "an increasing number, some 61 percent [of people polled], say they don't expect to return to their respective pre-recession lifestyles until the spring of 2014, if ever."

Wayne Allyn Root had a sobering essay called Why the Greatest Depression of All Time Has Begun. (I quoted him in my latest WND column.) In it he says (about the economic downturn), "Here's where the story gets downright frightening. This time the results are going to be dramatically worse than 1929. This time we are facing The Greatest Depression ever. Why? Because The Great Depression had NONE of problems and obligations we are now facing.

Do you get the picture? Disaster looms. We are staring at the Greatest Depression ever.

In other words, a future economic depression will be infinitely worse than the 1930's Depression because people lack a work ethic, a moral base, and the sense of independence of our great-grandparents; and because our own government has sold us down the river into economic slavery. Real cheery, yes?

This month's issue of the magazine Whistleblower (WND's monthly publication) highlights preparedness. I was asked to be a sort of editor-at-large for this issue. This meant suggesting topics as well as providing a few of my own articles. To its eternal credit, WND has never shied from the subject of preparedness, nor scoffed at those involved in the movement. 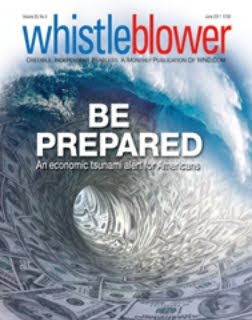 But others are not as generous. A query came across my computer a few days ago as follows:

Seeking people for one-hour Reality TV special dealing with people who overstock food. Among the subjects we are looking for: people who stockpile food, who have more food in the pantry/fridge/freezer than they will ever use, people who cannot resist a deal at the grocery even if they do not need more items nor have room for them, and the like.

By these criteria, we fit the bill in spades. Let's face it, we all know to whom this query is directed. It's directed at those kooky Preppers, the ones who (cough) "hoard" food. Ha ha, isn't that funny, look at all the tin-hat wearers who overstock food! What a bunch of dingbats! They even deserve their own reality show!

That's the scary part. A crash is coming, and the various media outlets, the government, and the talking heads are ignoring it... or worse (but more likely) lying about it. It can no longer be avoided. Even the supposed "tough-love" fixes being floated by the republican leadership will do nothing to stop it.

So we'll keep hearing about "the danger of a double-dip recession" or that our current troubles are just a "speed bump." And we'll continue to hear made-up unemployment numbers and watch the stock market bubble on a diet of imaginary money from the Federal Reserve.

Meanwhile, we'll continue to push toward self-sufficiency and ignore the barbs of those who want to put us in reality TV shows.