Remember all those darling little fluffball chicks we got last March? 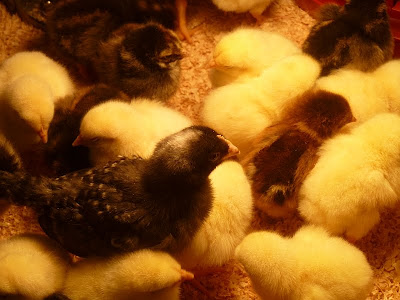 Well, the yellow chicks were Cornish Crosses, a hybrid fast-growing meat bird. While normal chickens dawdle along in growth and finally reach their full size around six months, by three months the Cornish Crosses are massive and more than ready to be butchered.

So yesterday was the day to bring them in to the butchers. We've butchered chickesn in the past but frankly aren't very good at it, and for $2.50 a bird it's hardly worth the effort of doing it ourselves.

But how to transport them? After thinking through all the options (and finding them unacceptable), I hit upon the idea of using our manure sled. So I folded down the seats in the car, put the sled inside, and padded it with hay. 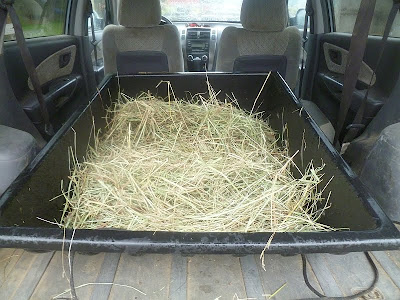 At this age, Cornish Crosses are in the huge freaky mutant stage, so I knew it was unlikely they could even hoist themselves out of the low sled. Turns out I was right. They teetered and flapped a bit until they learned they could lie down and not get tossed around by the car. But there was one guy who kept flopping around until you could almost hear the other chickens yelling, "Shaddup and siddown!" 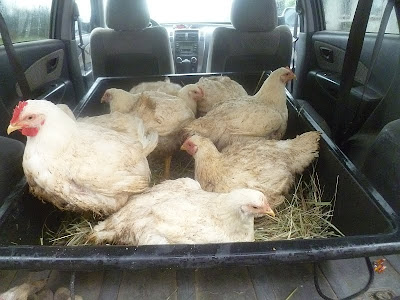 It was a gray and rainy day. Believe it or not, this is the lake. If you look really really hard, you can see the faint outline of the not-too-distant hills on the far shore. 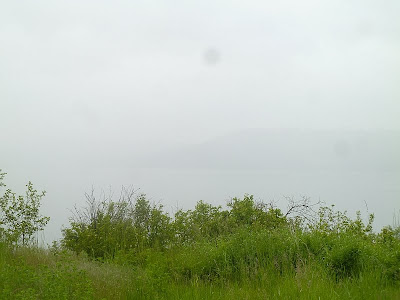 On the drive, I passed this green field dotted with turkeys in courtship mode: 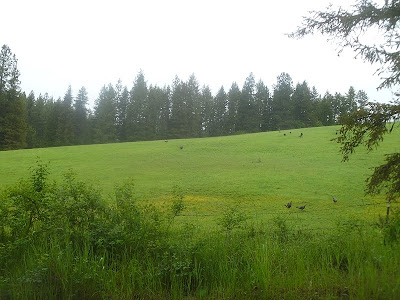 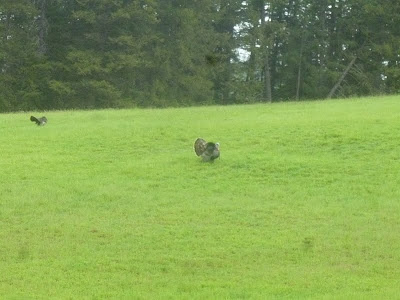 At the butchers (a family-run business), they were ready and waiting. They put the birds in a cage. The orange cone on the left (a cut-down traffic cone, evidently) is the killing cone, where the bird is inserted upside down and decapitated; the hot pot of water in the center is for soaking the feathers to make plucking easier. 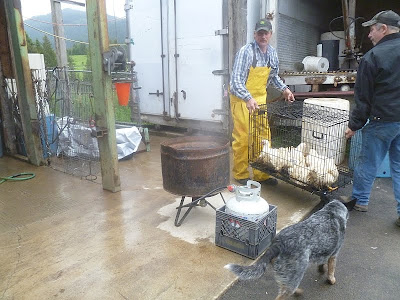 Here is the facility where they clean and cut up chickens, as well as other livestock or game their customers might bring in. Squeaky clean. 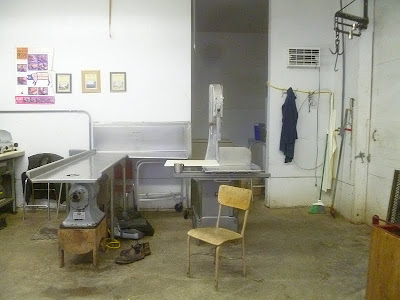 The birds would have been ready within a couple of hours (they have to be cooled before they can be wrapped), but I told them I wouldn't be back in town until Thursday so they'll freeze them for me instead.

On the way home I passed this gorgeous farm. I wish we lived there! 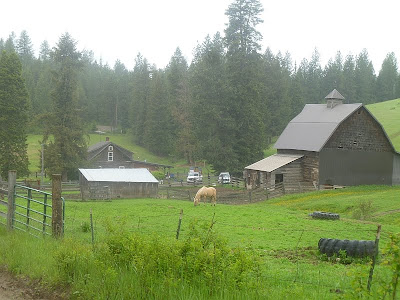 The drive took me past some amazing sights. Those rocks are cliffs dropping straight down into a gorge. The pipe in the center bottom drains water from the ditch on the other side of the road over the cliff. 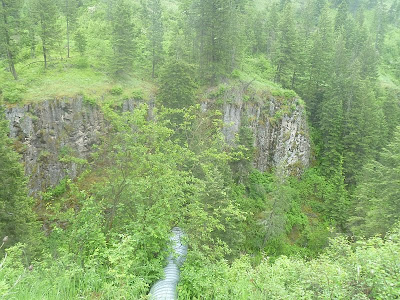 Here is the steep hillside over the cliffs pictured above: 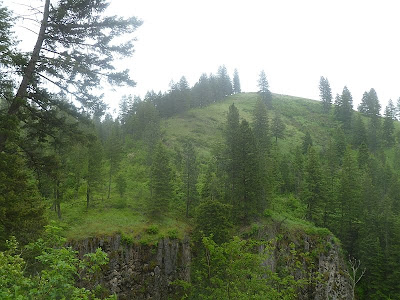 Anyway, that's it on the chickens. They'll be in our freezer on Thursday.
Posted by Patrice Lewis at 11:45 AM