Spring chores on the homestead

Both kids are on the mend from yesterday's stomach flu, though Older Daughter is still weak as water and not up to much (she got it worse than Younger Daughter). Schoolwork was out of the question, so Don and I got some outdoor work done.

With the weather holding for another day or two (before more rain moves in), Don decided to get some fence holes augered to rebuild our garden/orchard fence.

Moving the auger into position... 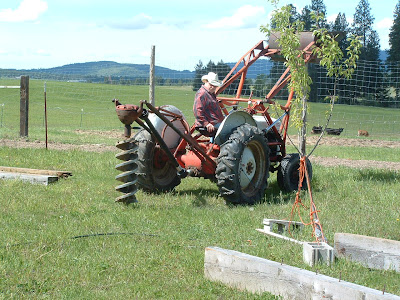 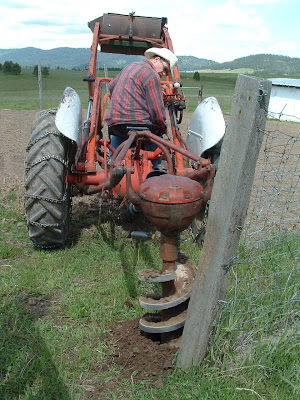 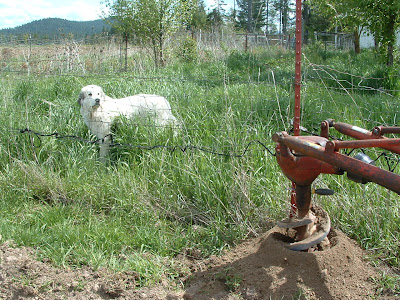 You can see the tangled, hog-tied, ridiculous excuse of a fence we have around the yard and garden. Is it any wonder last year's vegetables were devoured by the deer? I doubt these fences would keep out a possum. 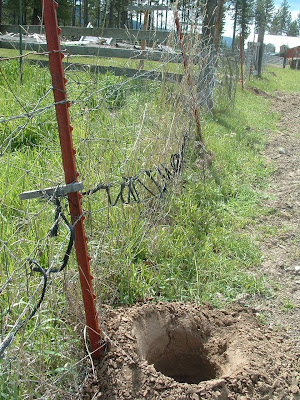 I ordered 200 bare root strawberry plants, which have been shipped and are on their way. They should be here any day. This means we had to get at least one berry bed completed and ready to fill with dirt to plant the strawberries.

Cutting a 2x10 to fit across the ends of the beds. 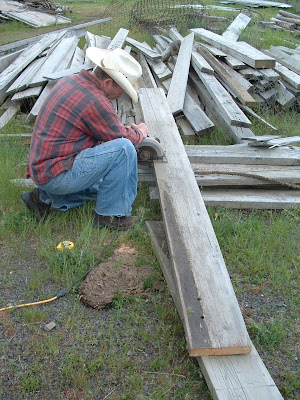 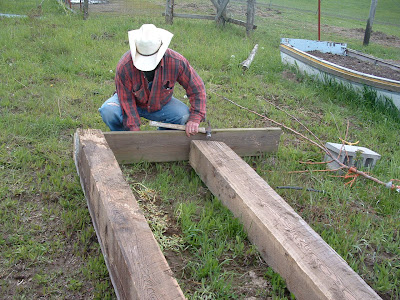 A five-foot long 2x10 across one end will give me a four-foot wide berry bed. 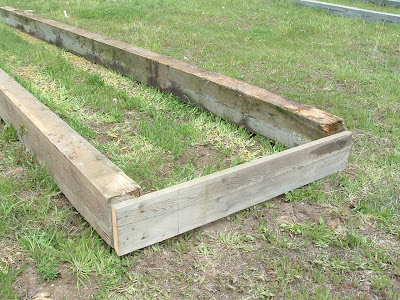 The beams were not the same length, plus one beam had a rotten end. 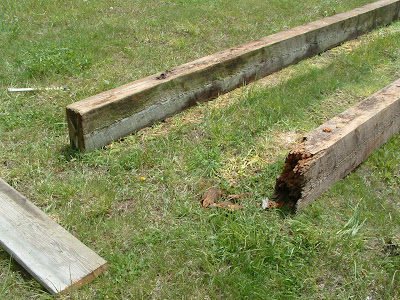 Trimming the rotten end with a saws-all. 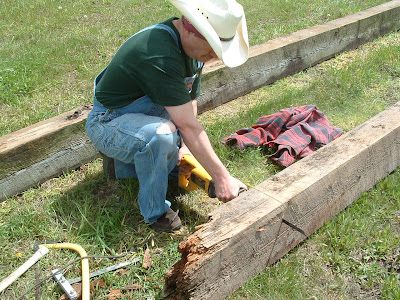 These beams came from an old barn we took down for some folks in our church. Despite their age (about 50 years) and the one rotten end, they're solid and clean through and through. 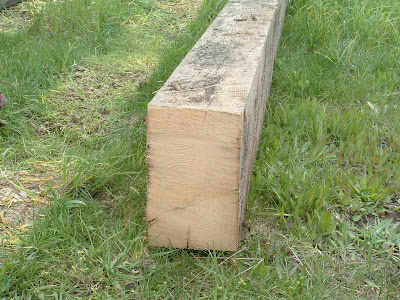 Measuring the other beam to trim it and square up the bed. 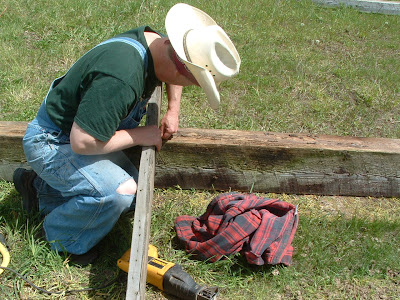 Trimming the other beam to fit. 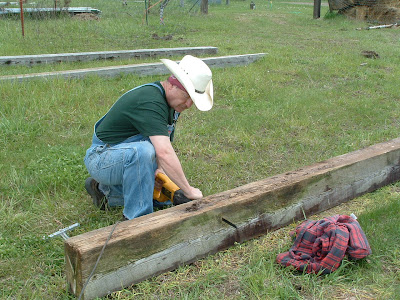 I think men in overalls are SO sexy... 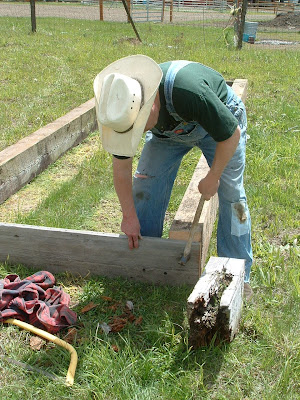 Here's Ruby and her calf Smokey. It turns out Smokey is a dun color. Who'da thunk? A dun calf means she got one dun allele from each parent. I had no idea they were carriers. Either which way, she's such a pretty calf. 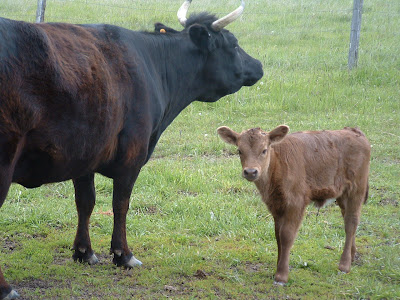 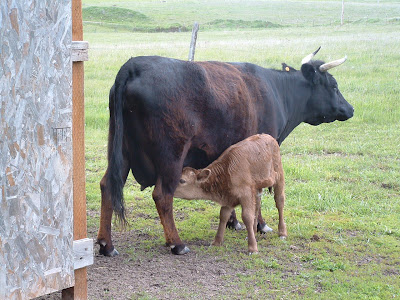 Late in the afternoon, our neighbor Dallas came back and took another crack around our proto wheat field with his ginormous tractor and borrowed mega-disker. 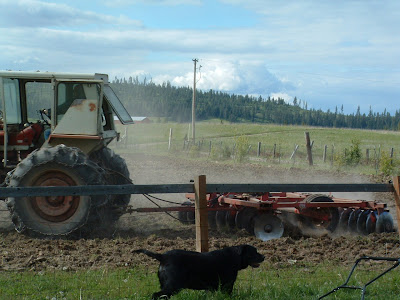 Before he re-disked, you can see how lumpy the newly-broken sod is. 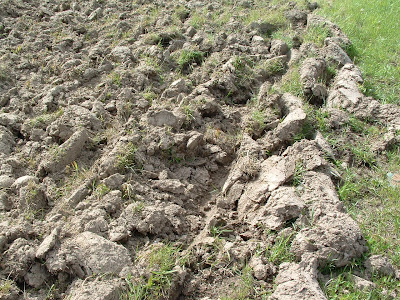 Re-disking helped a lot. Now for the rest of the summer, we can re-disk it ourselves using our smaller disker to keep the weeds from coming back. Come fall, we'll try planting wheat. 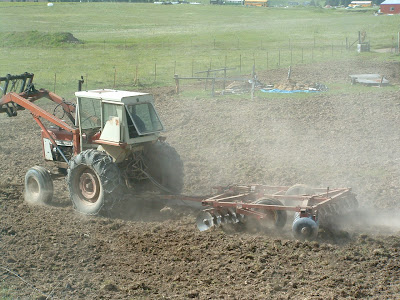 Younger Daughter carved herself out a little patch of garden where she planted some flowers. 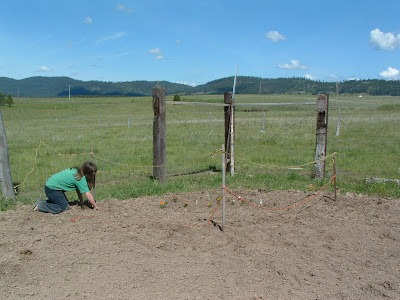 The cut sides of the seed potatoes are cured and ready to plant. 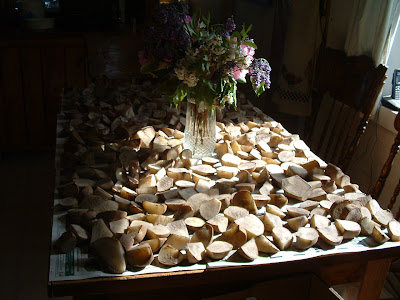 I strung baling twine along the length of the garden to make a straight row. 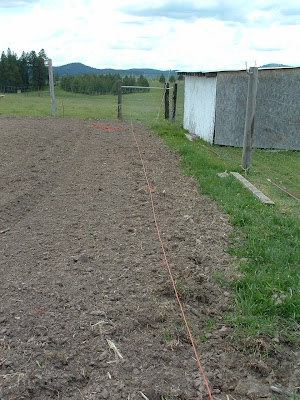 I dug a shallow trench along the string using a broken-off hoe. (A new hoe is on my wish list.) 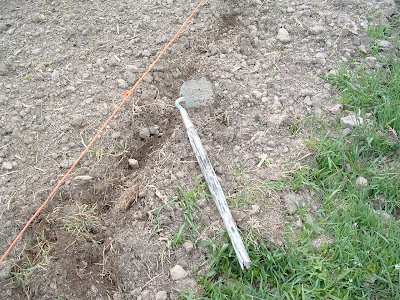 I used the black bucket to transport the potatoes. Easier than carting that heavy box around. 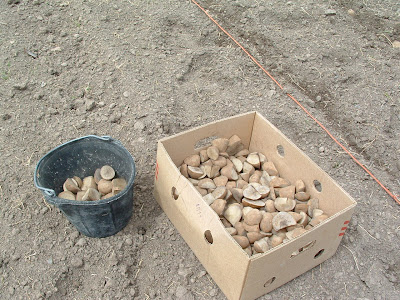 I stopped at four rows. I could have planted six or seven more rows, but that would have taken up half the garden. 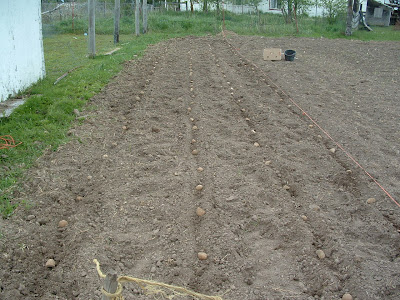 As it was, I had lots of potatoes left. I'll give these to a neighbor who is planting her garden this weekend. 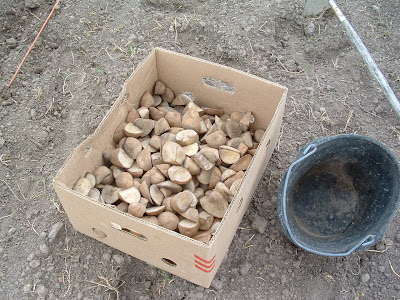 But since these potatoes are merely lying on the surface, they need to be covered with a thick bed of hay to be officially "planted."

A wheelbarrow full of hay. It's a tiresome job to trundle dozens of barrows of hay to cover the potatoes, but they're not really planted until they're covered. 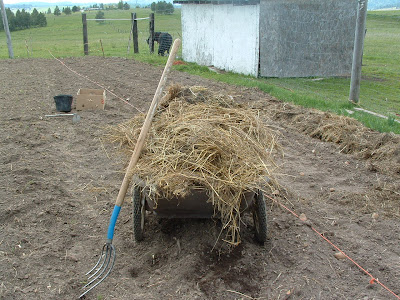 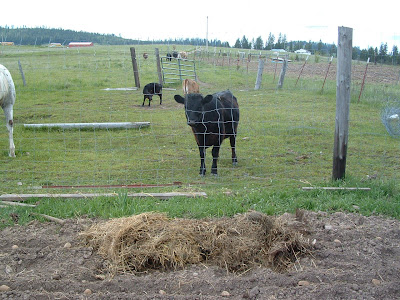 Turn my back for one minute and the chickens are all over the hay... 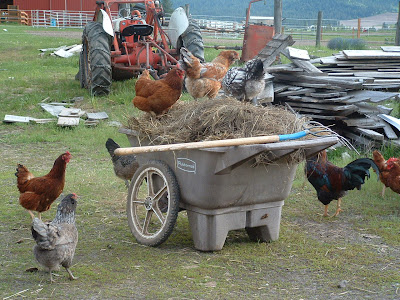 I got about half the bed covered with hay before I quit for the day. I'm pooped! 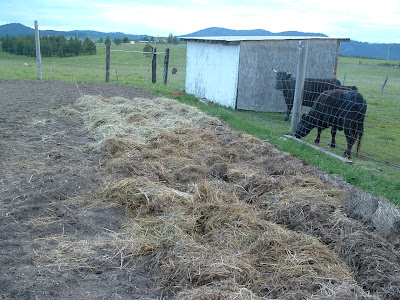