Considering the fact that it's almost June, the weather has been hideous. I guess it's making up the mild winter we had by being a nasty spring. Today is cold, windy, some rain, and we have the woodstove going full blast.

So, naturally, Jet chose this day to have her calf.

We've been waiting for weeks. Poor Jet's been looking misshapen and uncomfortable for so long that I was starting to get concerned.

When I went to get Matilda this morning to milk, I noticed the calf and saw that he was already dried and on his feet. That means he was born squarely in the middle of the night. Brrr, poor thing. What a chilly entrance to the world.

And yes, as far as I can tell it's a bull calf. Whoo-hoo! This means fresh meat in two years! And no wonder Jet was uncomfortable - this little boy was big! For a Dexter, that is. 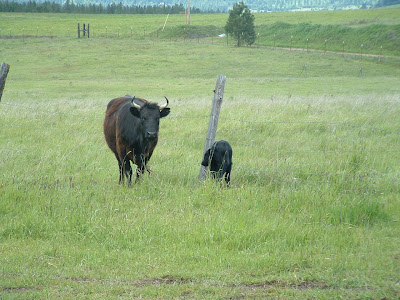 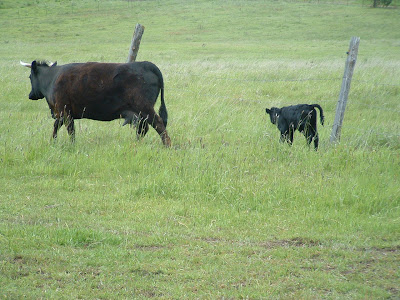 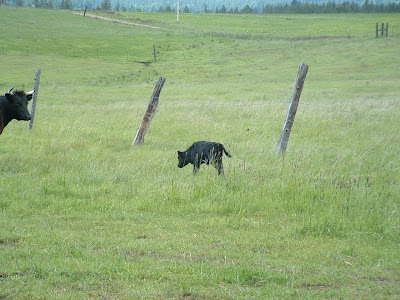 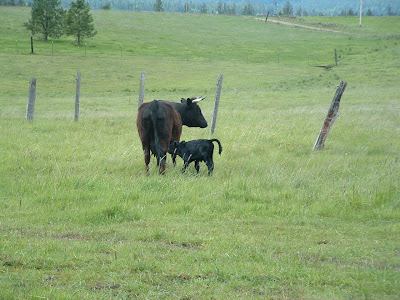 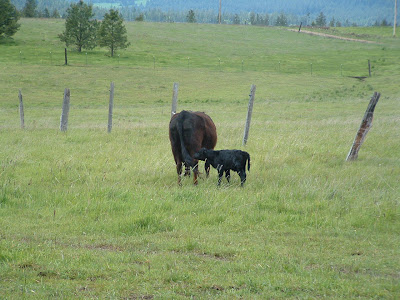 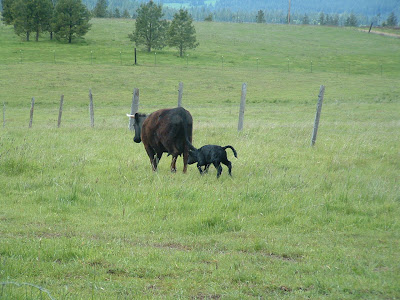 Earlier today I tried to scoop up the calf and carry him into the barn (so we can castrate him in a few days as well as keep him warm) while Don warded off Jet with a pole, but it didn't work - the calf was too heavy and I was too close to being gored. Jet is actually a very sweet cow, but never underestimate a mother's protective instinct... especially if the mother has horns!

That's why these photos are rather distant - I didn't want to stress Jet out any more than I already have. You'll also notice she's moving away from me in the photos...

Assuming we have the gender correct, his name will be Nebuchadnezzar. Don't ask me why, but that's what Younger Daughter wants to name him.
Posted by Patrice Lewis at 2:56 PM