The Mouse that Roars

Let me tell you a little story. 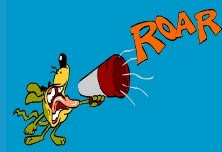 Many years ago, just before and just after our kids were born, I worked as a field biologist. With children, my preference was to work nights. If anyone wonders what field biologists do at night, the answer is simple: we surveyed owls. Specifically, spotted owls. Our team of biologists was called (ahem) "hooters." (This is because we voice-called the owls, or hooted. Don't laugh, it's a living.)

So I watched our babies during the day while my husband worked, and my husband watched them at night while I worked. This way we avoided daycare, a four-letter word in our household.

We got by, but it was tough being away from home from about 6 pm until 3 or 4 am. Additionally, I am NOT a night person. My ideal scenario is to go to bed around 10 pm and get up at 4 am. But hey, you do what you gotta do to make a living. My husband was working his butt off to build our home business and provide for our needs, and I supplemented our income as best I could.

So there I was, by my lonesome self, deep in distant and far-flung locations around southwest Oregon, hooting owls. I did a lot of driving on some pretty bad and sometimes dangerous logging roads. Southwest Oregon has some very, very remote and uninhabited areas, and it seems I saw them all during the years I hooted owls. Under such circumstances, talk radio became my salvation, a link to humanity during the lonely hours away from my family.

One of those voices that followed me into the woods was someone named Roger Fredinburg. He was a local fellow, meaning his radio station was located in the next town over from where we lived. I met him once at the county fair and felt like gushing with gratitude for the verbal hand he extended while I was so far away from hearth and home and humanity. I liked listening to his sensible conservative commentary about various issues.

But as the years went by, our circumstances changed. Thanks to my husband's hard work, our business reached the point where we could afford for me to quit working outside the home and work on the business instead. I still listened to Roger Fredinburg, but this time it was in our shop, not in the woods.

Then we moved to Idaho, and I lost touch with the local radio stations we listened to while we were in Oregon. Oh well, life goes on.

So imagine my delight when I saw Roger Fredinburg's name on a WorldNetDaily column a few months ago. What a blast from the past! I immediately emailed and asked if he planned to be a regular on WND, and mentioned something about how much his radio show meant to me during those lonely evenings in the woods. He emailed back and said he planned to be the occasional guest commentator, but was busy with his own website and business and had no plans to be a regular WND contributor.

So we stayed in touch.

Then last week he sent an email to his address book indicating he was looking for talk show hosts and columnists to feature on his website. I immediately contacted him to express my interest, and the rest is history.

This is a rather lengthy way to introduce the fact that I have a new column through Roger Fredinburg's website. I hope to make it weekly news from Flyover Country. I've provided a link on the left-hand side of my blog which will display my archive.

I'll take this moment to thank Roger for the opportunity to write for his site. Who'da thunk, all those years ago while hooting owls deep in the woods, that one day I would be writing for the Regular Guy?
Posted by Patrice Lewis at 10:11 PM