We bought a used vacuum cleaner a few years ago that can only be described as temperamental at best. But hey, it was cheap.

But whatever the cost of the vacuum, the one thing I won't scrimp on is vacuum cleaner bags. It drives me nuts when a cheap bag suddenly bursts, spewing dust and debris everywhere. So I've been in the habit of buying name-brand bags over the years.

A few months ago, while in a sew/vacuum fix-it store in Coeur d'Alene, I bought some even pricier bags that were "micro-lined." The reason I bought them is they were on sale (otherwise I would have balked at the price regardless of the quality). The dealer assured me they were tough, high-quality bags that wouldn't burst. As he was right, they've been terrific. I bought every bag he had available at the sale price.

Well, I'm down to my last two bags, there's no more sale, AND I have to go all the way into Cd'A to get more. What to do?

Yesterday while vacuuming, the bag became full and the vacuum wouldn't work properly. (Remember, it's a temperamental machine.) So I discarded the full bag and pulled out one of my two last remaining vacuum bags.

That's when I decided to implement a little tip I learned in The Tightwad Gazette (wonderful book, highly recommended).

Before installing the new bag, I teased open one of the sealed ends. It took awhile because I didn't want to tear (and therefore weaken) the paper. But the micro-lining helped, and after about fifteen minutes I had one end of the bag open. 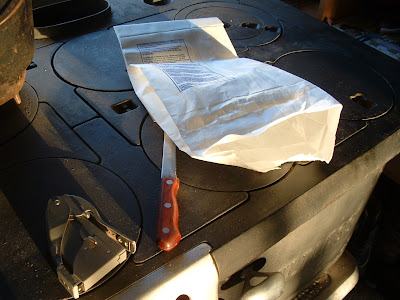 Then I stapled it shut, using ten staples. In theory, this would allow me to remove the staples when the bag is full, empty it, re-staple it, and re-use the bag. 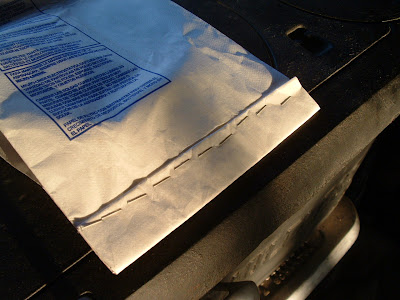 Well, so far it's working beautifully. The stapled end is apparently just as tight as the other glued end, and I finished vacuuming the house without an issue. I should be able to get at least five more uses out of this single bag before it gets so weak I won't be able to stable it any more. 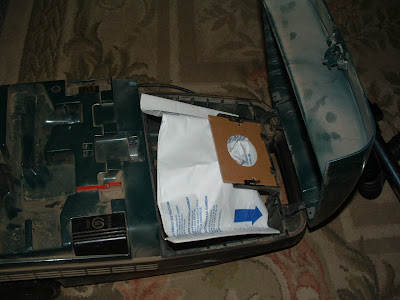 And that's your frugal tip of the day.
Posted by Patrice Lewis at 8:57 AM