The beginning of berry beds

Not long after we moved to Idaho in 2003, I fenced off a section of land and naively planted twenty blueberry bushes. As time passed, I learned I'd planted those poor blueberries in about the most seriously weed-infested location on our property. In that berry patch we got everything from bull thistle on down to tufted grasses, all competing with the blueberries. For years I battled those weeds. I pulled and pulled and pulled. I dug and dug. I covered the ground with black plastic. I tried everything, but the blueberries never thrived. They couldn't. Most are still alive, but are so stunted as to be laughable.

So I got this notion that we should build blueberry beds (and raspberry and strawberry beds) in the orchard/garden area, which is (or will be shortly) fenced off high enough to keep the deer out.

This morning we made the first step toward this goal. Several years ago we tore down an old barn for some folks in our church. As a result we have piles of lumber of various types, including these huge 18' beams. We planned to use these to build raised berry beds. 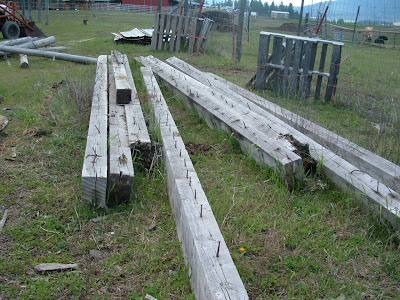 But first we had to move the darn things. They're very heavy - probably around 300 lbs each - and it was dicey getting them moved.

This is what the orchard - with its start-up fruit trees - looked like before we moved the beams: 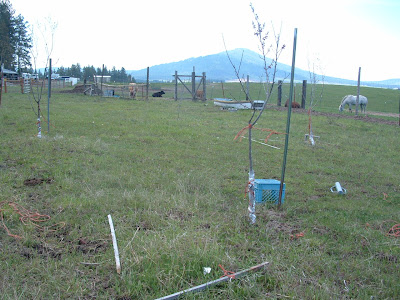 Don hoisted up one end of a beam with the tractor bucket and I chained it in the center. Then I fastened the chain to the bucket and he lifted the beam while I guided it parallel to the tractor as he moved it into the orchard. 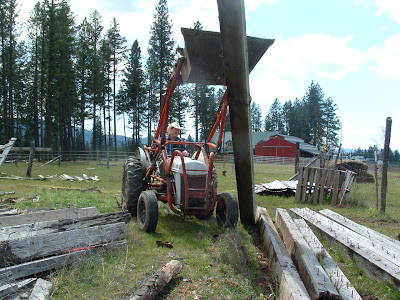 We moved a total of eight beams, which will form the outline for four berry beds. It was hot, hard, dangerous work and we were glad to have that part done. 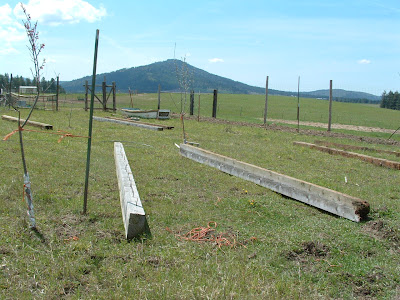