A fair to remember

On Monday, the girls and I did something we've never done before: we went to the Spokane Interstate Fair. Eight years living in north Idaho and we've never been to the region's largest fair.

The trouble with county fairs, you see, is they fall smack dab in the middle of the busy season for our woodcraft business. Usually we're so busy cranking out stock, that taking a day to see the sights is unheard of. However this year, Don was on his way home from the Shrewsbury Renaissance Faire and in his absence I didn't have any stock to work on, all my writing deadlines were met, and I figured, what the heck. It's our one window of opportunity.

Se we went to the fair.

It was the day after 9/11, and I was pleased to see the flags still respectfully at half mast. Because the day was hot (in the 90s) and we wanted to escape the heat, we started in the fine arts exhibit halls, where this startling sight greeted us. 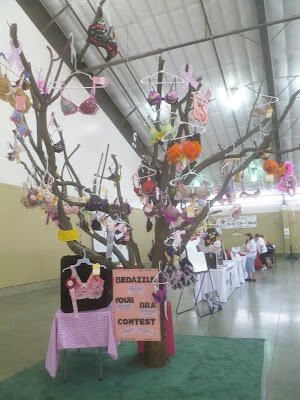 Beadazzle Your Bra Contest? Who thought of that one? And why were there so many entries? 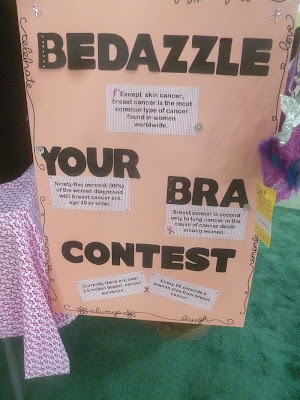 Come to find out it was a breast cancer awareness exhibit. Okay, can't argue that one. I've lost friends to breast cancer.

Some of the needle art entries were astounding. 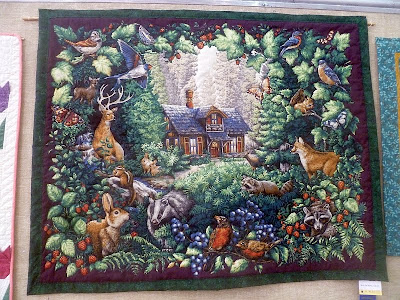 We passed this little toddler enjoying ice cream. She looked so cute I asked permission to take a picture. 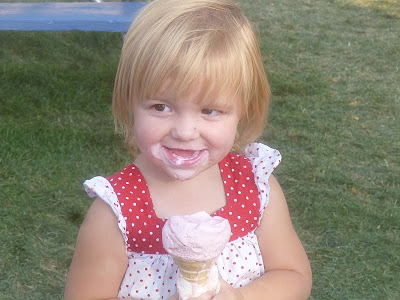 There was an old train on display, preserved in its historical state and full of info on the history of trains. Very interesting. 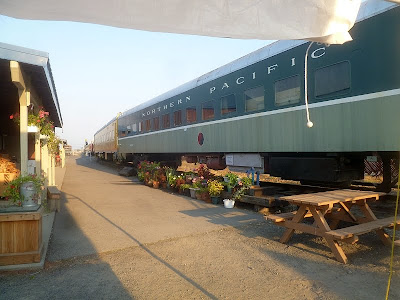 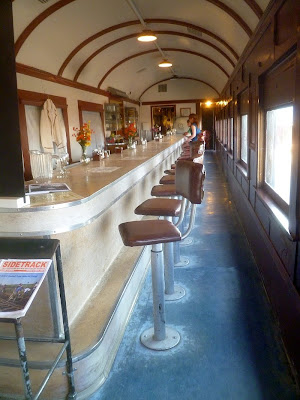 These were being sold as "redneck wine glasses" -- a canning jar mounted on a glass stem. As a confirmed canner, these cracked me up. 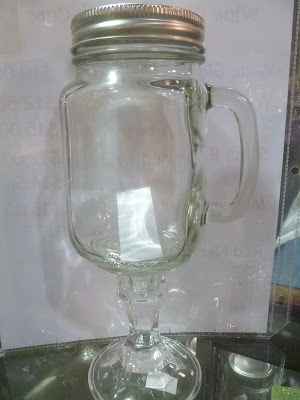 The old classic "mystery water faucet" trick. I remember being baffled by this effect when I was a kid. 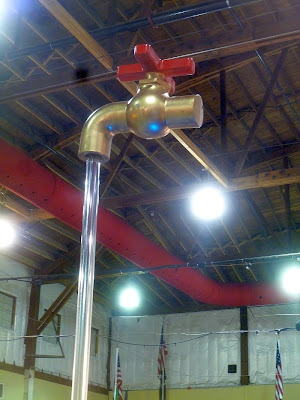 I told Older Daughter it would please me very much if this is the only time I ever saw her in jail. 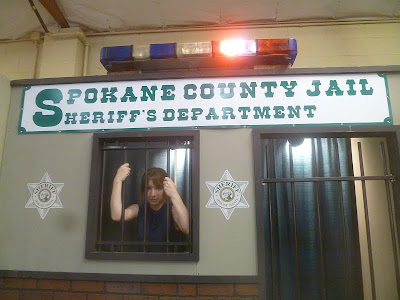 The Master Food Preserver display -- one of my favorites! 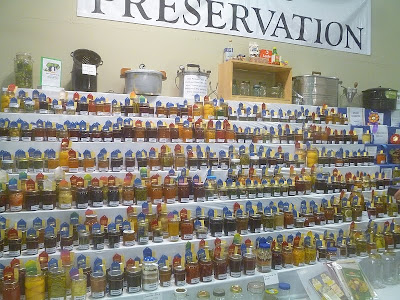 A couple of 4-H girls horsing around on their steers. 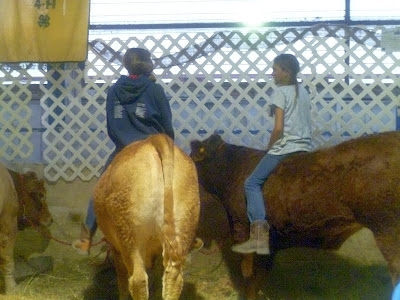 Some pregnant goats. They are so unbelievably misshapen at this stage! 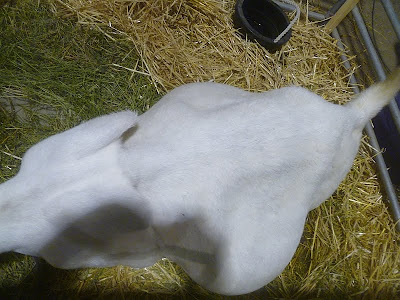 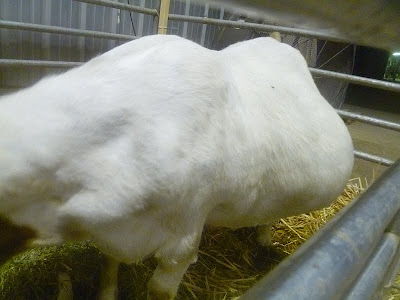 We like to hit the midway just at dusk, when the lights look their prettiest. Here's the sun setting between rides. 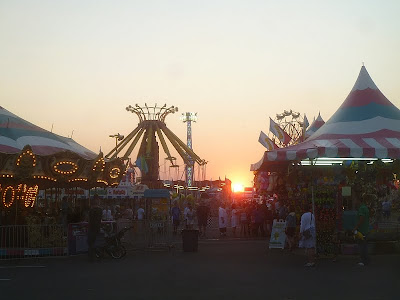 And here's the full moon rising. 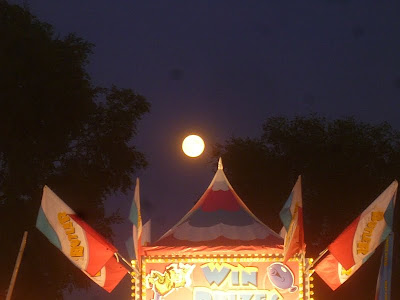 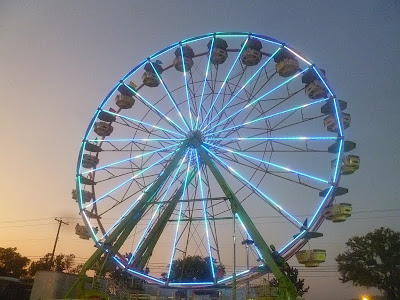 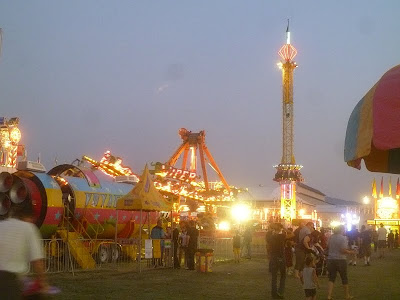 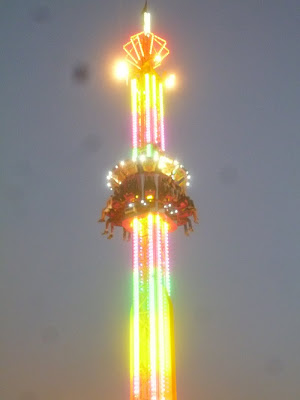 Midway rides are too expensive to take, so we just walked around and enjoyed the sights. 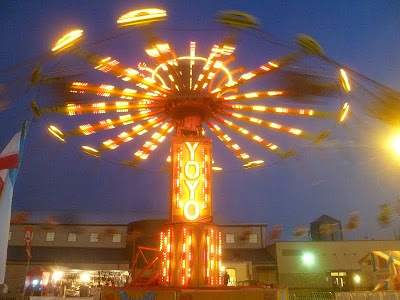 The one exception was an off-to-the-side display called "EuroBobble" which consisted of gigantic balls floating on water, into which people can be zipped. 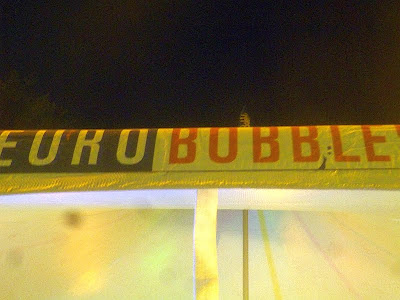 Older Daughter chose to fork over eight bucks (!!!) of her own money to experience this. But she had a blast! 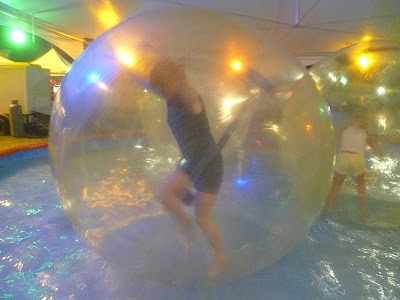 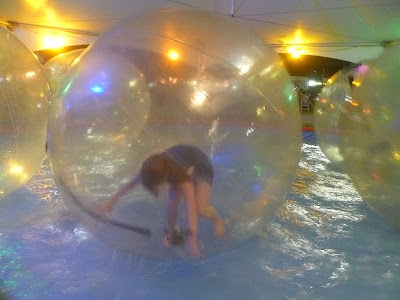 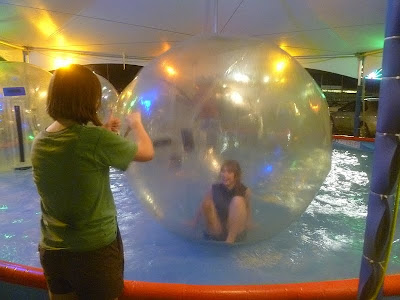 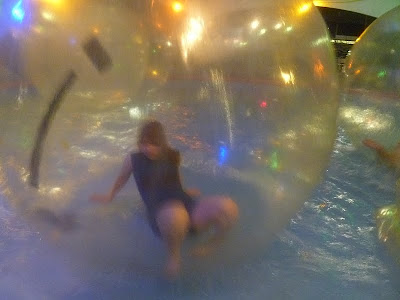 We stayed at the fair much later than we otherwise would; in fact, until closing (10 pm). The reason is because a friend was arriving at the airport at 10:45 pm. We picked her up and made it home just after midnight, really pooped.
Posted by Patrice Lewis at 8:55 PM

Email ThisBlogThis!Share to TwitterShare to FacebookShare to Pinterest
Labels: fair