A ballet of logs

Yesterday afternoon was exciting -- we got our firewood in for the winter!

Over the years it's become harder and harder to obtain the wood we need to heat our home by scrounging half-rotten logs from forest floors or old slash piles. Plus -- and boy, it's hard to admit this -- Don and I are getting older, and scrounging firewood is darned hard work. So this year we bit the bullet and ordered a logging truck of pulp wood to be used for firewood. This is a common practice here in north Idaho.

Yesterday was the big day! The logger, a very nice fellow named Mike, came in the late evening just before sunset. 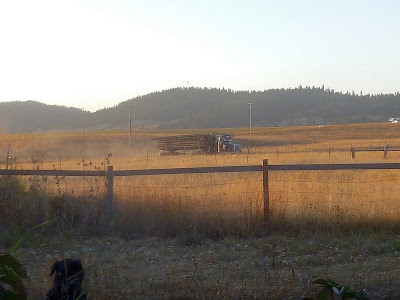 Mike is an independent logger, and his truck has a self-loader, meaning he can load his own truck. 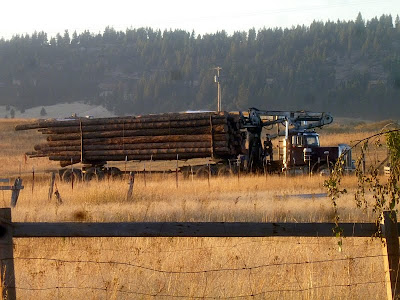 We had to decide where to yard the logs. We ended up peeling back some of the fencing in the pasture to make a landing. 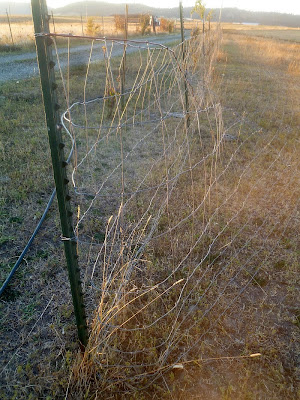 Here he is coming up the driveway... 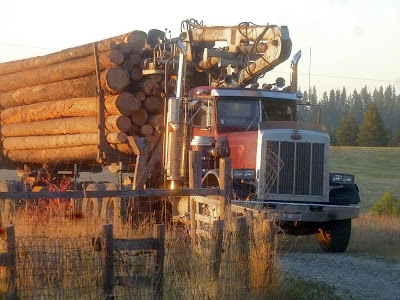 You don't really appreciate how big these trucks are until you're standing next to one of them. 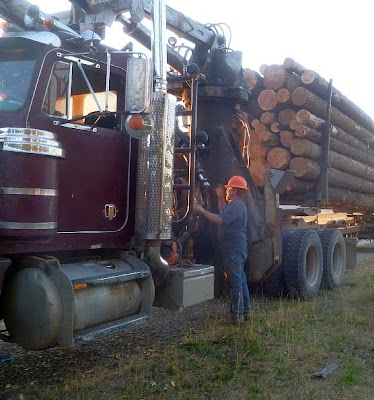 Mike climbed into the seat of the loader. 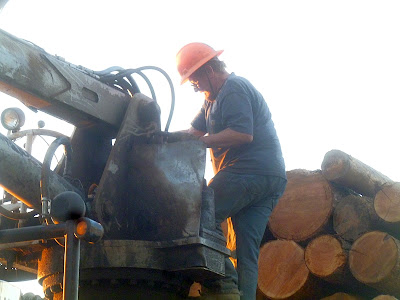 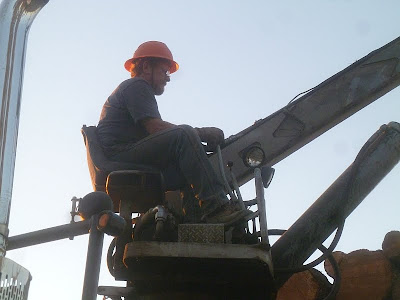 First thing he did was extend the side legs that brace the truck. The loader will be swinging logs wide to one side. Without this brace, the heavily-loaded truck could easily tip over. 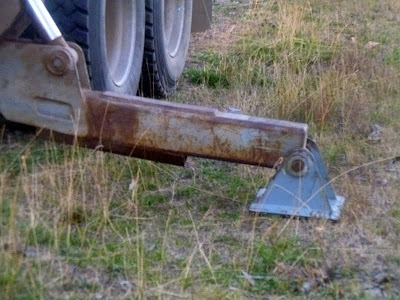 Next he yanked the T-posts which held up the fence we peeled back earlier. 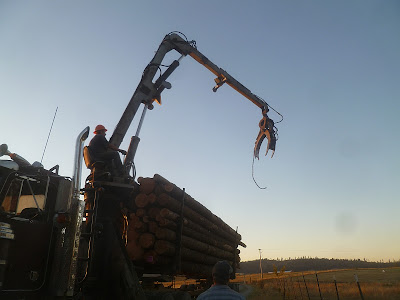 Here Don is wrapping the post with a chain... 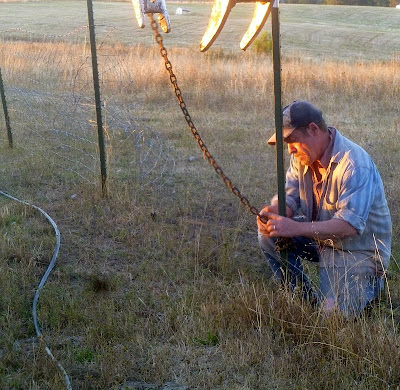 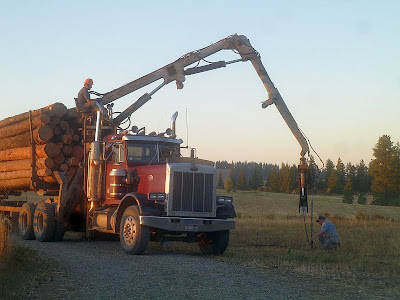 ...and the loader arm yanked them up effortlessly. 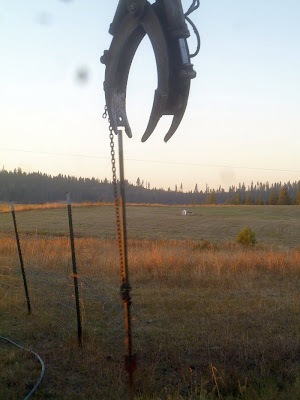 He was so skilled in the use of this loader arm that he could perform the most delicate tasks with amazing precision. At one point he lifted a drip irrigation hose out of the way so it wouldn't get crushed. Unfortunately I missed getting a photo of it, but it so impressed me that I asked him to do it again later on so I could get a shot (it was almost dark by then, so I had to use the flash). At this point the sun went down. 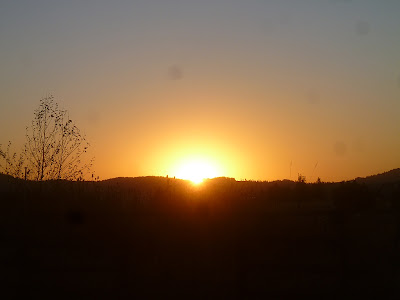 Mike went under the truck to loosen the chains that held the logs together... 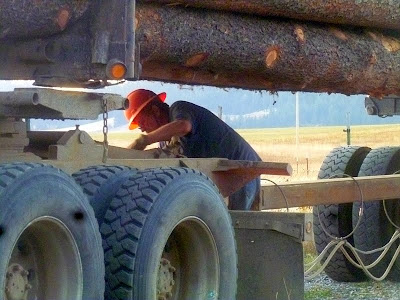 ...and then he began unloading the logs with the loader arm. He was truly astounding with this tool. Watching him in action was like watching a ballet of logs. 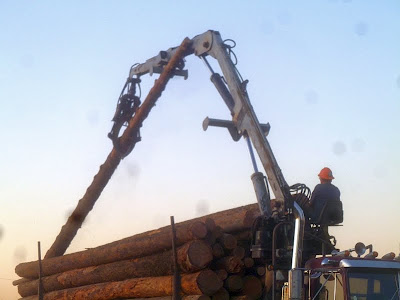 First he laid down four logs (here's two of them) to use as a foundation for the rest of the load. This way the majority of logs won't rot from lying on the ground. 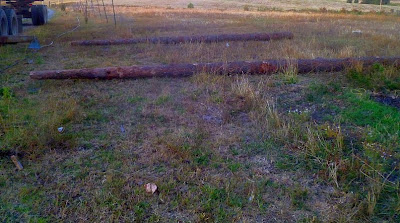 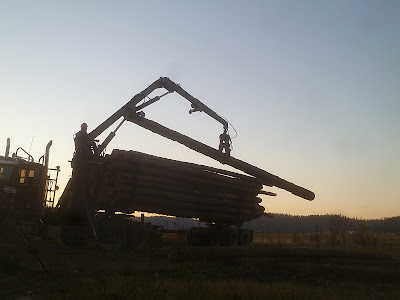 These logs are salvaged pulpwood. This photo is a bit blurry, but can you see how split up the log is? This log wouldn't be suitable for a lumbermill, so many independent loggers supplement their living by salvaging such logs and selling them for firewood. Those of us who heat exclusively with wood are grateful. 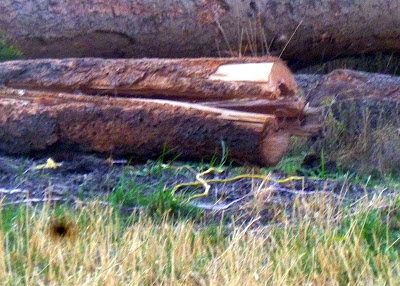 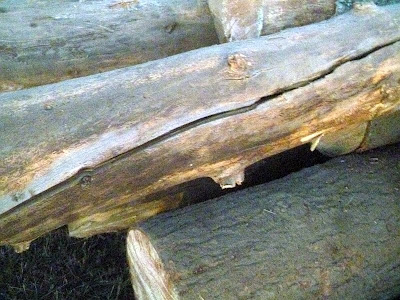 All of these logs have something "wrong" with them, unsuited to mill work, perfect for firewood. It took about forty-five minutes to unload the whole truck. 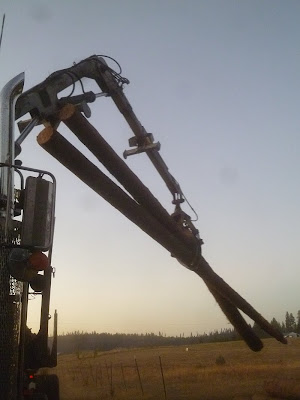 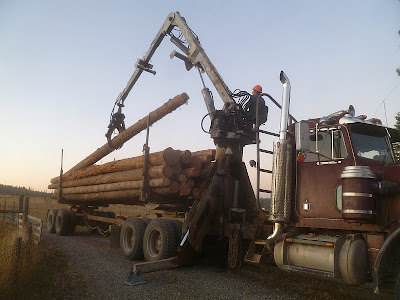 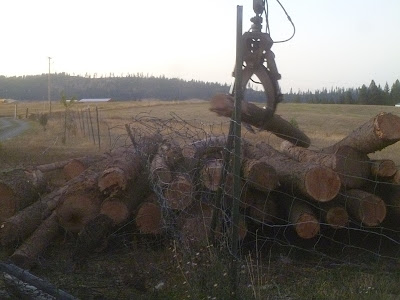 (Hamming it up for the camera.) 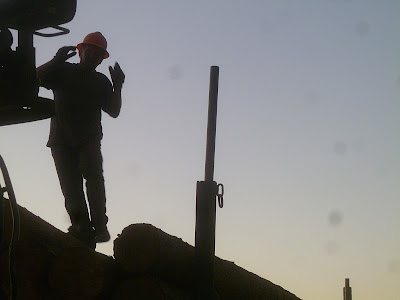 After it was empty, he used the loader arm to lift the back half of the truck and piggyback it on the front half. This is the standard procedure for empty logging trucks. 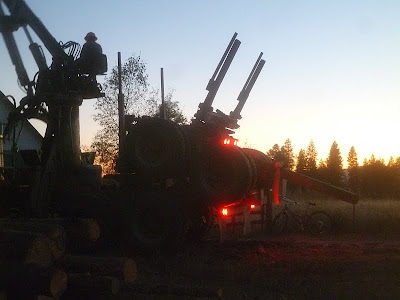 Here's the final pile, all twelve cords' worth. I've been doing little happy-dances all day long, thinking about the security of having two years' worth of firewood practically on our doorstep. 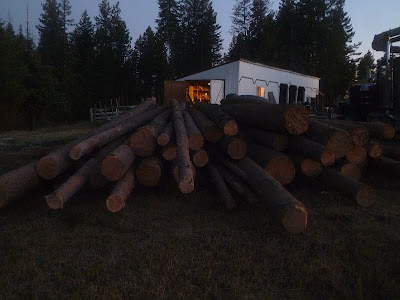 After Mike turned the truck engine off and it was quiet once more, Don and Mike and I sat on some logs and chatted for twenty minutes or so as the evening deepened into night. It made me realize once more just how much I appreciate and admire the hard-working blue-collar men and women of this nation, who do their jobs without fuss or fanfare, but without whose efforts life in America would be much much different.

Logging is dangerous work. Mike related how he fell off the loader earlier in the year and landed on his shoulder, necessitating surgery. But he told us this as a matter of fact, not to garner pity. He's typical of the kinds of men I admire, men like my husband who work hard to provide for their families and don't look to the government for a handout every time they get a splinter.

We paid Mike $1100 for that truck load of firewood. It will give us about twelve cords. Worth every penny.
Posted by Patrice Lewis at 6:43 PM