Sorry I've been so quiet, it's been loopy around here! Good thing I'm living the Simple Life, because it would be scary if things got complicated.

Our home woodcraft business is in overdrive at the moment. We have a series of major shows coming up (I'll be heading for Portland, OR in less than two weeks) and we're working like crazy. Actually much of the burden for shop work is falling on Don at the moment, since I'm being kept busy with kids, cows, writing, and radio interviews. 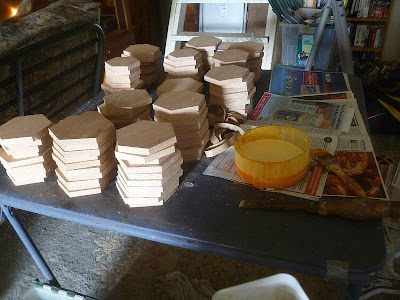 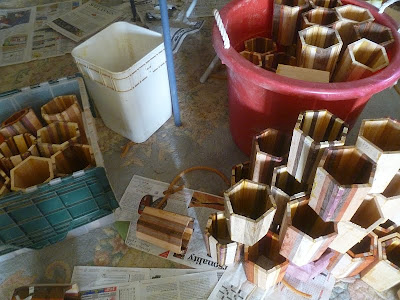 While much of the rest of the country is sweltering under horrible heat, it's been cool here in north Idaho. In fact, Tuesday morning it was a rather nippy 36F. That's unusual, even up here. 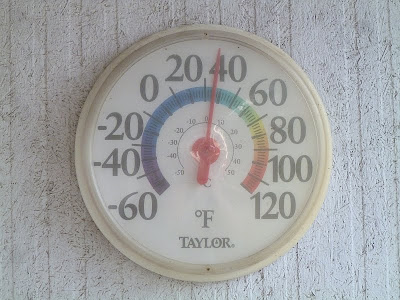 A doe and fawn pass through the field across the road from us. 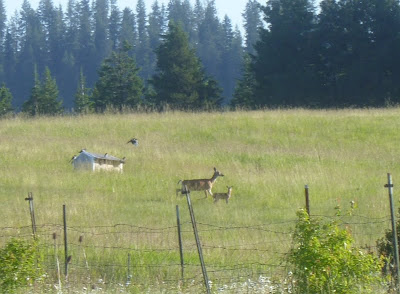 Snap, one of our roosters, settles inside Younger Daughter's bicycle. 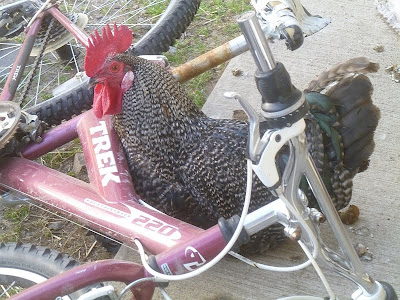 'Tis the season for daisies. Took this photo from our driveway. 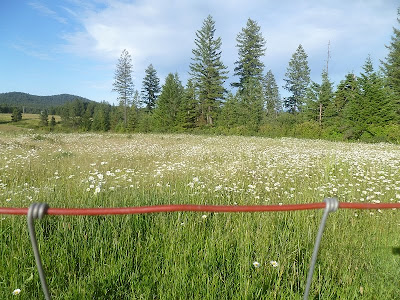 A curious visitor. Doubtless there's a fawn hidden around somewhere. 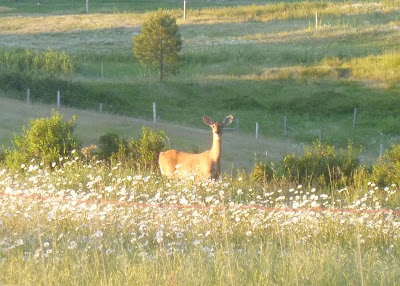 We hosted last week's neighborhood potluck, which included a celebration of my dad's (cough) "39th" birthday. 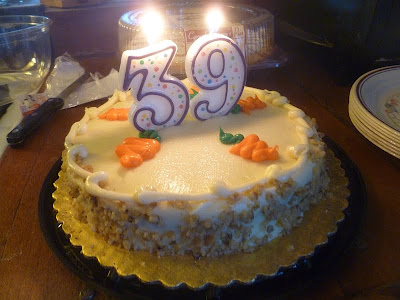 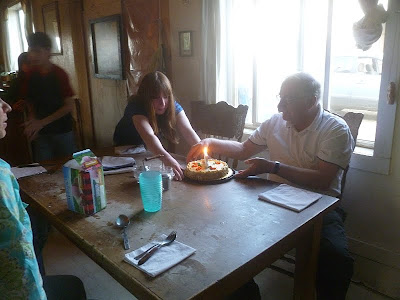 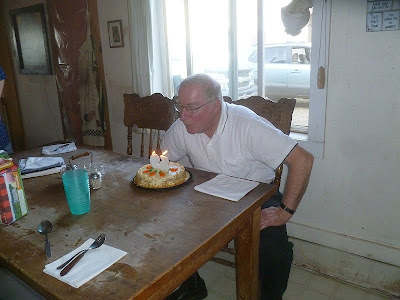 I was packaging up some books that folks had ordered the other day...and when I pulled out our tape gun, I discovered it had a whole bunch of chicken feathers stuck to it. Don't ask me how, these things just happen. I thought briefly about taping the address labels onto the package with chicken feathers, but something told me the post office people wouldn't be amused. So I didn't. 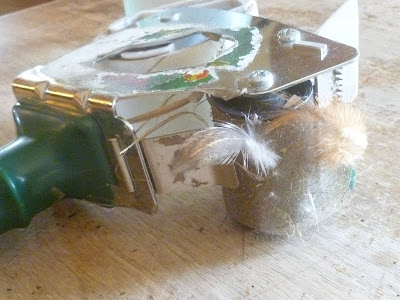 The view down our road from the end of the driveway. 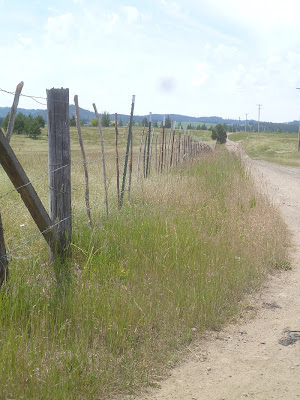 In contrast to the chilly morning temps of a few days ago, we've also had some hot days. Whenever hot days coincide with the need to get some writing done, it combines into a handy excuse to take the kids to the lake. They swim, I write. 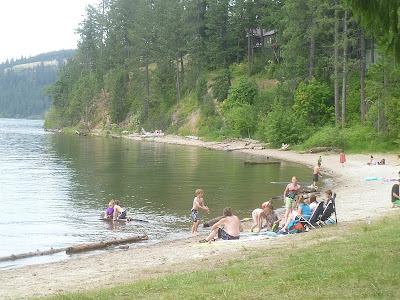 If you look in the middle distance of the above photo, you'll notice a huge log. That's where the girls and some friends were momentarily resting. 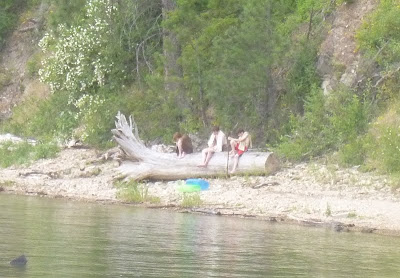 Younger Daughter finished practicing her fiddle the other evening and rested the instrument in its case. I sat down in a nearby chair to take off my sock and shoes before bed, and noticed this photo opportunity. Artful tableau and all that jazz. 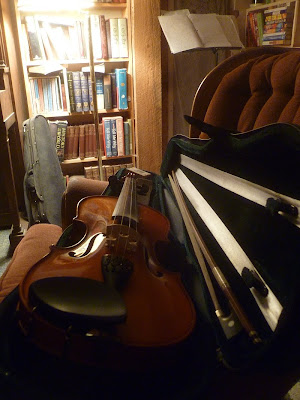 Yesterday was an uber-busy day. Up at 4:30 am in order to be awake and prepared for my radio interview on Doug Stephan's "Good Day" program (6 am my time). 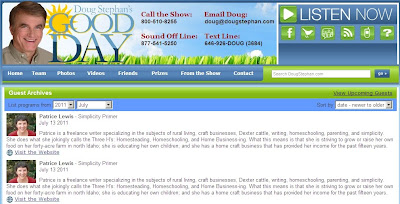 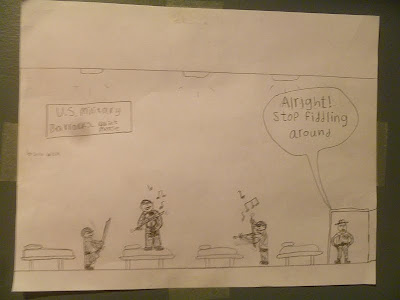 Then after lessons, into Coeur d'Alene where we had dinner with my parents, then drove back into Spokane to drop them at a motel so they could catch an early-morning flight home (after spending a couple months in Coeur d'Alene visiting us). By this point it was 9 pm. Spokane is currently experiencing ten miles of rather intense road construction on the main highway. I presume they're doing most of the work at night so as to minimize impact on traffic. I took these photos as we crept along at 5 mph through the construction zone. "Why are you taking photos?" Olde Daughter asked. "Because I'm bored," I replied. 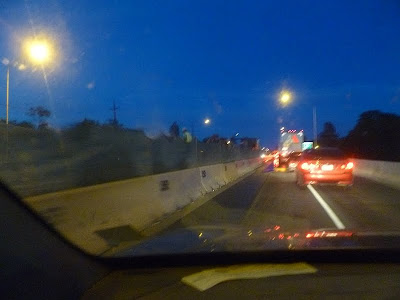 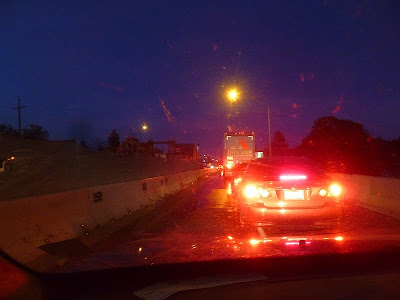 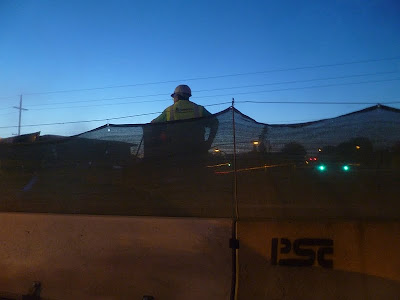 We didn't get home until 11 pm, so I was W-I-P-E-D. And today Older Daughter has a piano recital in a town an hour and a half south of us (I volunteered to drive as well as transport some of the harps for other students) so it's shaping up for another long day!

Where's my simple life?
Posted by Patrice Lewis at 7:09 AM