Two sides of the barn

Now that we have the south side of the barn finished, it was time to put up the west side. The prevailing wind direction in these parts is from the southwest, so we needed to get both those sides up before the snow (or rain) flew.

However we had foolishly stacked the western-most haybales right up to the edge of the barn, thinking we were being efficient by packing them as far over as we could. (Wrong.) Snugging them up against the edges and corners meant we had nowhere to put the support beams along the short sides of the barn. 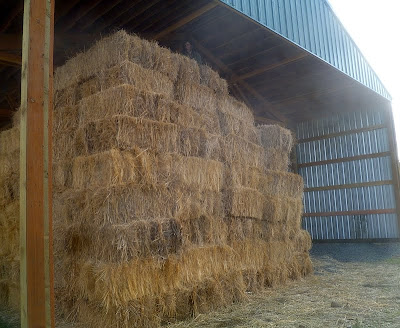 Fortunately we only had to take out a couple of rows of haybales. Younger Daughter can't lift bales yet (they're too heavy), so she was the "tumbler." Starting at the top, she tumbled down a few bales at a time, and Older Daughter and I heaved and stacked them deeper into the barn. 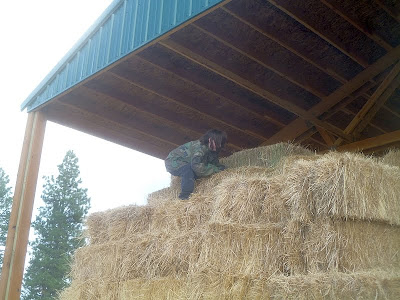 You can see the progress. The upper bales are gone (they're on the ground, on the left side of the photo). Younger Daughter stopped tumbling long enough for Older Daughter and I to catch up. 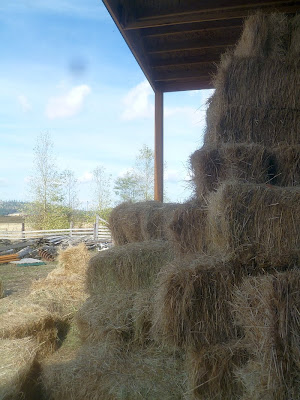 It didn't take us long -- maybe an hour -- to get the bales moved. Now we have room to work on the wall. 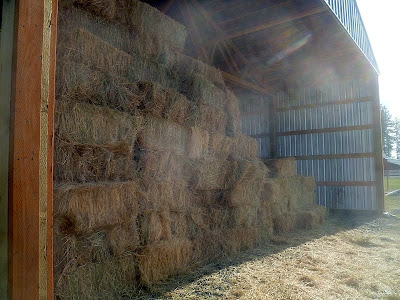 Next thing was to drill some holes. When the contractors who built the barn drilled the holes for the uprights, they had a spiffy little Bobcat with an auger attachment that drilled effortlessly. Unfortunately we don't have that kind of equipment.

Since our tractor is still on the fritz, we paid a neighbor to come auger some holes for us. 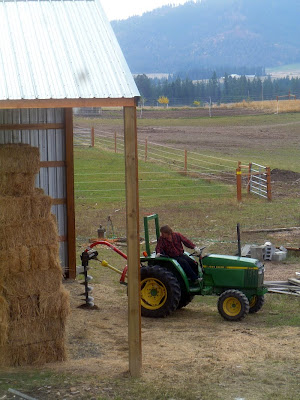 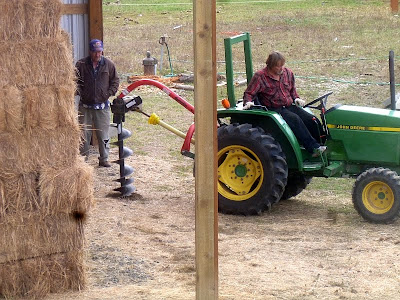 Don't be fooled by the pretty tractor and shiny auger. It was a nightmare. Tractor augers just don't have a lot of oomph, certainly not like the contractor's Bobcat. The localized area around our house has a layer of hardpan about 18 inches down that is virtually impenetrable, which is why most trees we plant die after a couple of years -- the roots can't punch through the hardpan. The tractor auger simply couldn't get through the hardpan either.

Anyway, we needed four holes drilled -- and each hole, which under normal conditions would take maybe five minutes, took 30 to 45 minutes, and for most of that Don and I were putting all our weight on either end of a stout board laid across the top of the auger arm in a desperate attempt to put more weight and oomph on the auger.

When those holes were finally dug, we called it a day. We were sore and battered and exhausted.

A few days later, Don started putting up the support beams. The roof at the short ends of the barn were all held up by the rafters and so didn't need support beams. But we needed beams to hold the siding, so we had to install them ourselves. 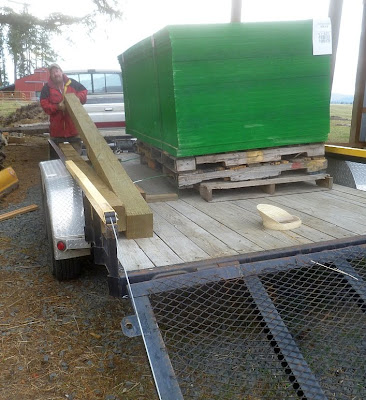 ...and heaved them upright into the augered holes. 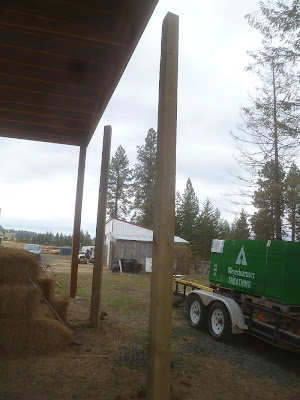 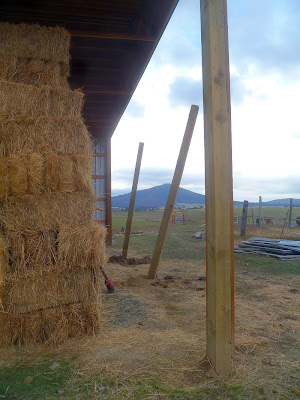 But once we tweaked and adjusted and bubble-measured the beams exactly upright, how could we keep them still and in position long enough to pour concrete? My clever husband solved this issue by adding a temporary 2x2 from the truss to the beam to hold it in place. Also, some might question why we didn't buy beams which reached all the way to the truss. The reasons are many, but two of them are: (a) this span doesn't need support (the truss is the support) so having the beams structurally supporting the truss would be pointless; and (b) the posts were added after the roof was installed rather before. 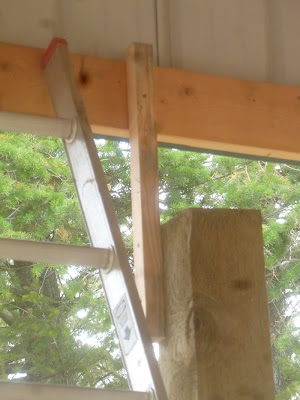 In addition to the little 2x2 at the top, Don also temporarily nailed up a 2x6 to a corner post for added support. (You can also see the pink string level near the ground which helps us line everything up.) 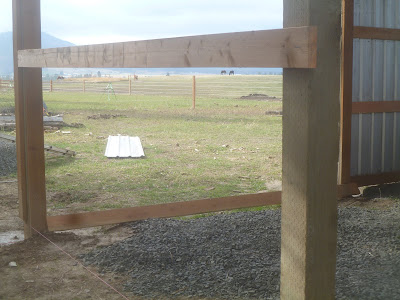 He used this three-way bubble level to make sure everything was exactly in position. 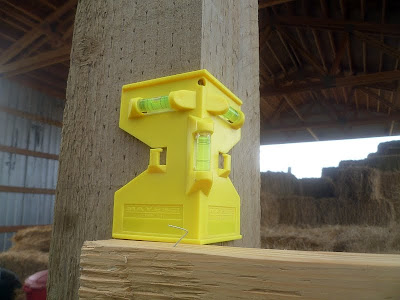 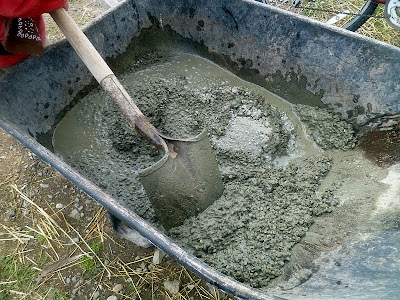 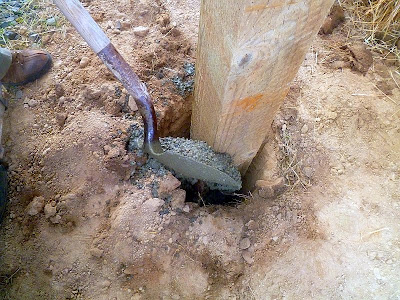 After the concrete for the new posts set, Don added the connecters from the posts to the truss to allow for places to attach the sheet metal siding. 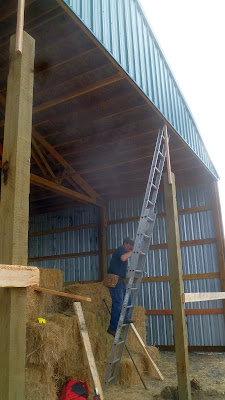 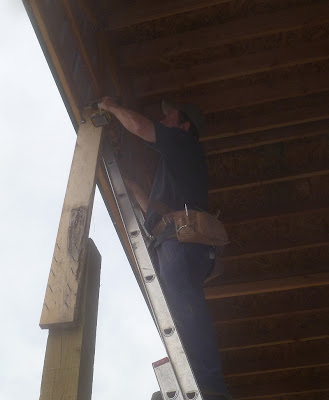 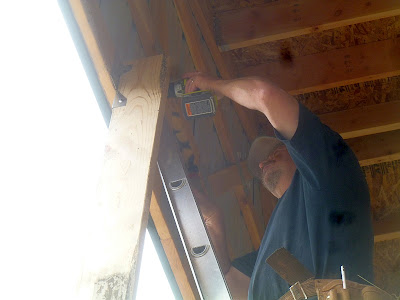 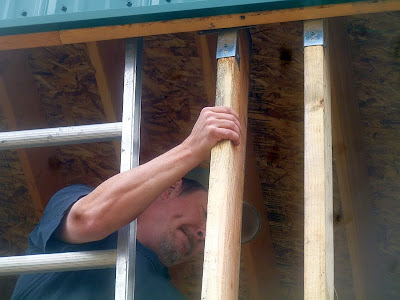 This is the end result. While we put in the uprights on both the east and the west sides of the barn, it's only the west side that's getting a wall because it faces the prevailing wind direction. (The east side will eventually have a long awning for the cattle, as well as feed boxes the length of the barn.) 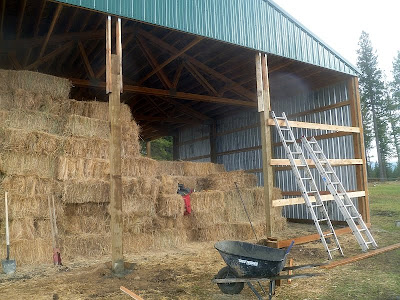 Compared to putting in the uprights, the siding was almost easy. Don put in the girts... 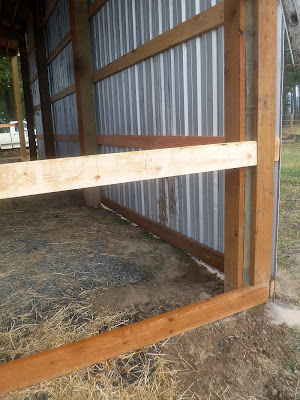 ...but only for one portion at a time before stopping and putting up the siding. He was dancing between rain storms at this point, and figured some siding was better than nothing to protect the hay. 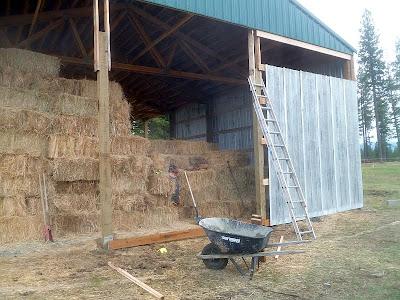 But after a few days' work, he got the bulk of the siding in place. 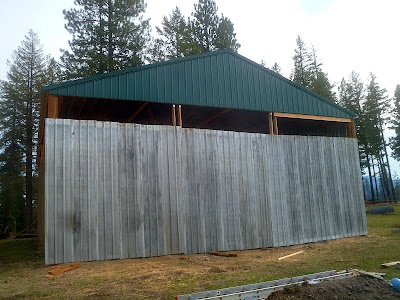 Look at this! It's starting to look like a real barn, isn't it? 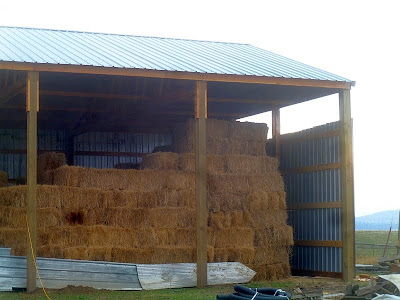 Don still hasn't had a chance to put in the cap pieces of siding, but he'll get to it shortly. And unless the wind is blowing rain or snow sideways (which, granted, is fairly common) then for the moment the hay is protected. Progress! We're making progress!
Posted by Patrice Lewis at 9:08 PM