We got a call Tuesday morning from a fellow named Chad who used to live next door to us (his parents still do). Seems his cow Lily just had a baby bull calf, entirely out of the blue. Surprise!

We witnessed Lily's birth last year, one of twins born to our neighbor's Jersey cow, which means Lily is half Dexter, half Jersey. Lily was a little young to be bred, but since she kept hopping the fence into our field, it looks like our bull Gimli had his way with her. Gimli was also her father. It's fairly common to breed a heifer to her father, so this little bit of inbreeding isn't unusual.

Anyway, Chad and I chuckled over the unexpected nature of Lily's little surprise, he mentioned in passing that Lily was for sale, and that was that.

But then Don and I started talking. Since we butchered Gimli last June, we've been without a bull. Trouble was, in looking at Dexter bull prices around us, we were concerned because we couldn't afford what people are asking.

But what if we took this newborn bull calf and raised him to become our herd sire? Having one of Gimli's offspring presents a bit of difficulty in terms of inbreeding, but since we're in the process of building a bull pen, those difficulties are not insurmountable.

Bottom line, we bought Lily and the calf. 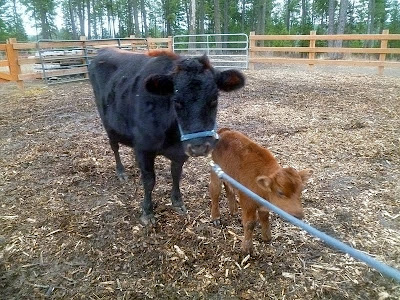 Chad offered them to us at a ridiculously low price, well under half of what it would cost us to buy another bull (and that price included Lily as well). In fact, we dickered Chad up a bit on the price because we didn't want to take advantage of him.

Yesterday we broke ground on a bull pen (future blog post to come!) so we're making progress. A bull pen will mean we can control when the bull breeds our cows. We can send the cows into the pen when we want them bred, and not have a bull rampaging around breeding indiscriminately. We won't feel comfortable breeding this new sire to some of Gimli's granddaughters, so we'll have to make other breeding arrangements for them.

Lily and the calf are now in our neighbor's barn until we can set up a space for them. The baby is too young to be outside, so he needs to be in the barn. Additionally, we need to keep him close in order to dehorn him in a few days' time.

Lily is sorta kinda tame but not terribly so. Nonetheless, I think I'll try my hand at training her to milk. We've been without fresh milk for some time now, and I'm curious how a half Jersey, half Dexter milks anyway.

This all happened so unexpectedly that we're still adjusting. Life is never dull around here!

By the way, we've tentatively named the calf Atlas. Bulls, regardless of their size, always have huge egos; so Atlas seems like a nice egotistical name, don't you think?
Posted by Patrice Lewis at 9:53 AM