Here's an interesting link from SurvivalBlog which maps all the 13,000+ McDonalds in the continental United States. It's called Where The Buffalo Roamed: How Far Can You Get From McDonald's? by Stephen Von Worley.

He writes:
As expected, McDonald’s cluster at the population centers and hug the highway grid. East of the Mississippi, there’s wall-to-wall coverage, except for a handful of meager gaps centered on the Adirondacks, inland Maine, the Everglades, and outlying West Virginia.

For maximum McSparseness, we look westward, towards the deepest, darkest holes in our map: the barren deserts of central Nevada, the arid hills of southeastern Oregon, the rugged wilderness of Idaho’s Salmon River Mountains, and the conspicuous well of blackness on the high plains of northwestern South Dakota. There, in a patch of rolling grassland, loosely hemmed in by Bismarck, Dickinson, Pierre, and the greater Rapid City-Spearfish-Sturgis metropolitan area, we find our answer.

Between the tiny Dakotan hamlets of Meadow and Glad Valley lies the McFarthest Spot: 107 miles distant from the nearest McDonald’s, as the crow flies, and 145 miles by car! 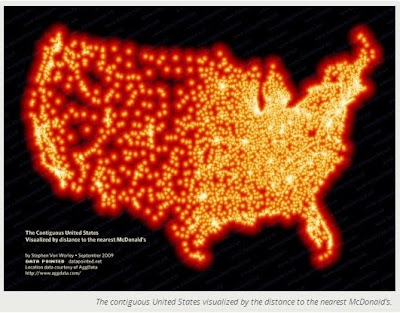 The nearest McDonald's to us is about 35 miles...
Posted by Patrice Lewis at 8:27 PM