James Wesley, Rawles, the incomparable editor of SurvivalBlog.com, has a new book coming out! This is the riveting sequel to his best seller Patriots. 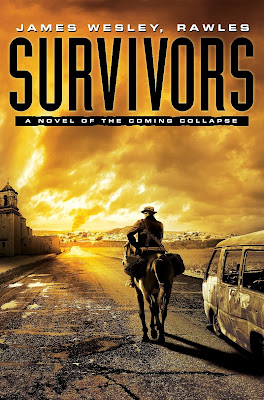 A brief synopsis of the book:

Instead of extending the "Patriots" saga further into the future, the storyline of "Survivors" is contemporaneous with the action in the first book. But it is set in different locales, with mostly different characters, with vastly different levels of preparedness. The novel opens with the perspective of a U.S. Army officer deployed in Afghanistan, just as "The Crunch" begins. Unlike the protagonists in "Patriots", most of the characters in "Survivors" don't have deep larder, so they are forced to scramble and improvise. There are just a few crossover characters between the two novels, such as Ian and Blanca Doyle (whom you will remember from "Patriots" as the pilots living near Luke Air Force Base.)

It is an exciting novel. The lead character, Andy Laine, is a U.S. Army officer that is stranded in Afghanistan, just as "The Crunch" (a global socioeconomic collapse) takes place. Although he has been released from active duty, Andy has to make his way back to his family and to his fiancee in the United States. Doing so when all of the military and commercial airline flights have been grounded turns into an epic journey.

Mr. Rawles is requesting that everyone wait until October 4 (Tuesday) -- the book's release day -- before purchasing, in order to generate a "book bomb." This is the technique all you wonderful folks used when my book was released, and it worked to shove it to No. 66 on Amazon(!). Now let's push to do something even better with Survivors and get it to No. 1 !!

(Besides -- ahem -- if you purchase it through this link, I receive a small percentage of the sales price as an Amazon Associate -- ahem...)
Posted by Patrice Lewis at 10:14 PM

Email ThisBlogThis!Share to TwitterShare to FacebookShare to Pinterest
Labels: SurvivalBlog.com