Some time ago, in response to a WND column entitled Another Year, Another Failure, I received an email from a gentleman named Harry who related an extraordinary story. I asked permission to post his email as well as some supporting information.
_____________________________

I always enjoy your commentary and can relate somewhat directly to the problem of the teacher in Chicago who is being charged with "weapons violations" for showing tools to a second grade class.

In my case, and to give you a little history, I retired from design research and after being bored for a year took a job in the local school district serving hot lunches to little kids. It was perhaps more fun than my career. But even though I had three very good performance reviews, an excellent working relationship with the kitchen staff and certainly had a good rapport with the kids, I was threatened with disciplinary action up to and including termination because I had the insipid gall to defend the word "Christmas" and other such indiscretions.

I also discovered a new oxymoron: Tolerant Liberal. The HR director in another meeting with me actually said in so many words that unless I was a politician or a school board member I should, in effect, keep my mouth shut. The fact that I told school officials that I would not apologize for anything I said really got their shorts in a twist.

I had already signed a new contract for the following year but as time went on the situation became untenable. It was right near the end of the school year and the day, the DAY after school ended for the summer, I received a letter explaining that if my disrespectful behavior continued I would be subject to further disciplinary action up to and including termination.

That did it! I decided that I was working there because I wanted to and not because I had to. So, I spent the next two weeks composing my letter of resignation: two pages and single spaced, where I lambasted them for all this idiocy. I had it read by educated friends for their input and suggestions and whether I was taking the right approach. They all felt the letter was well written and to the point. [NOTE: Letter copied below.] So I mailed it and in response I got a letter accepting my resignation and wishing me well in my future endeavors. How nice of them!

In my professional life I have taught at the university level, I taught kindergarten while in graduate school and over the years have developed a very negative opinion of our educational system. Are we doomed as a nation or is there a solution? Closing down the Department of Education, abolishing tenure and eliminating a lot of professorial deadwood might be a way to start. Just thought I would pass this on.
_____________________________________

Here is the instigating document, ironically called a "Joy and Celebration Survey." (I blocked out a name.) (Click to enlarge.) 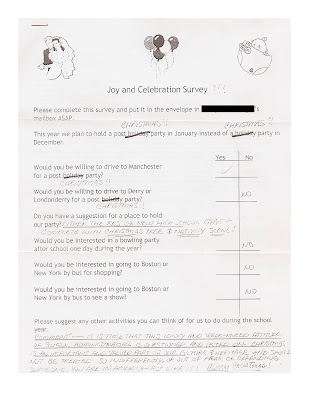 (For clarity, his comments at the bottom read, "Comment -- It is time that this idiocy and weak-kneed attitude of school administrators is questioned and acted on. Christmas is an important and valued part of our culture and heritage and should not be treated so indifferently or out of fear of offending someone. You are in America! Act like it! Merry Christmas!"
__________________________________________

Here is the resulting disciplinary letter he received (click to enlarge): 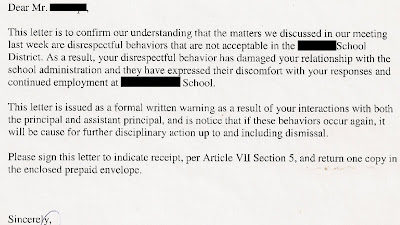 Here is a copy of Harry's resignation letter:

This letter is to inform you of my decision to resign my position at [name deleted] School.

I find it quite interesting and unfortunate how a situation can be allowed to deteriorate because of fragile egos. I also find it interesting how my job can be put on the line because of my personal views and comments on issues that are not unique to [name deleted] School, but are of concern to many across the U.S. and, at the same time, for my excellent job performance review of May 12th of this year to be totally ignored. It makes me think that there is a distorted sense of values in play here. At this stage in my life I will not allow myself to be intimidated and scolded like a little child, especially by people considerably younger than I am. Management by intimidation is unprofessional and wrong and I will not tolerate it. I will not allow myself to be manipulated by signing something I feel is inaccurate. “Disrespectful Behavior”? That really should be explained further as it seems to relate more to my job performance than my views. If there was any disrespect floating around it certainly did not come from me. “Discomfort with my responses”? I guess nobody has ever confronted or challenged school officials before and they are at a loss as to how to handle it. But if these are the ways that challenges are met and handled at [name deleted] School, then perhaps they should look inward for resolution.

Other issues are the Halloween problem and my supposed comment to [name deleted] that I truly believe never happened. This could have been reliance by [name deleted] on second or third hand information or made up, as was the insinuation that I criticized the President at some point. Also the anonymous survey where the comment I made in defense of Christmas so upset some people that they were determined to find the source. Having done that they had the gall to confront me with it. That was bullying, intimidation and a violation of my privacy which probably could easily be determined by legal counsel. And for [name deleted] to say that I am intolerant is unconscionable. When [name deleted] mentioned my “emailing the world” about the talent show problem I was disappointed that you did not interject the fact that it was your suggestion that I also email your boss after offering me your support. What was that all about? In another instance I remember the presentation the kids put on the Friday before spring vacation. I found it appalling that several got up and recited little speeches about global warming and related issues. I wasn’t listening to kids, I was hearing little programmed robots that have been taught what to think and not how to think. I learned in graduate school almost 40 years ago that education was beginning to spiral downhill and, in so many words, I told [name deleted] that in our first meeting. She quickly said it was getting better. Of course I disagreed. Apparently we don’t read the same books.

And when it comes to the murals in the hallway I thought it was a wonderful project, especially with all the kids participating. I could have taken issue with that too but chose not to. I came to work one morning and saw several people working on the tiles and talked with one to get an understanding of the project. Nice conversation, until I made a suggestion that got brushed off without so much as a “thanks for your input”. I thought it would be nice to have next to the murals a chart listing all the kids names, their grade and the code that would allow them to find their particular tile in the several hundred that comprised the murals. My reasoning was that each child should get individual recognition for their work and also be able to show their parents the tile when they visit the school. I was told it was a “school project” and that everyone from the “school” participated. Apparently the “individual” is not important but the “group” is.

A short time after the murals were finished I happened to see one of the third graders in the hall. She was heading for the library with a cart of books and I asked her about the mural and where her tile was. She told me the code number. I committed that to memory and next morning I brought in my camera and took a picture of her tile. I went on the computer at home and made a print of it complete with all the pertinent information about school, grade and her name. I then gave it to her for her birthday, so at least one student got recognition. These are the kinds of things I am concerned about and justifiably so. This was a time to pat the kids on the back and I don’t believe it was forthcoming.

John Dewey, an educational philosopher, has been quoted as saying “Children who know how to think for themselves spoil the harmony of the collective society which is coming, where everyone is interdependent”. I could never be a disciple of John Dewey because he, as an educator many years ago, set American education on a path that is not working in the best interests of this country. In a different era, Alexis de Tocqueville, a French political philosopher in his Democracy in America said “The citizens are led insensibly, and perhaps against their will, daily to give up fresh portions of their individual independence to the government, and those same men who from time to time have upset a throne and trampled kings beneath their feet bend without resistance to the slightest wishes of some government clerk”. It was individuality and entrepreneurialism that made this such a wonderful country and it is gradually being decimated by an ideology that no one in education wants to admit exists. I have taught at the university level and continue to be disturbed at the “product” that higher education is producing. These newly minted “teachers” over the years have been saturating K-12 with an ideology that is preventing kids from understanding where they came from and who they are as Americans and watering down our culture and heritage with “diversity” and “multiculturalism”. American history, if it’s taught at all, utilizes textbooks that are revised, rewritten and misleading in their facts and downplays American exceptionalism. And if I were to go to the school library I would almost be willing to bet that I would also find a book entitled “Heather Has Two Mommies”. There are some very unfortunate agendas working their way into school curriculums at lower and lower grades. If I had any power I would shut down the Department of Education and break up the NEA for the corrupting influences that they are. I know I am digressing here and getting away from the issue at hand. But I just wanted to give you some insight.

I want you to know that I have the utmost respect for [name deleted] and can not see burdening her with my continued employment knowing that I would be going through the year with a large target on my back. I believe it would create a very untenable situation for her and be a source of unnecessary stress. Although I loved my job and certainly loved being around the kids I prefer not to be part of an institution that is drifting away little by little from all the positive American traditions and values that are so important in life, and to me.

The reason I took such pains to post this issue is because it so beautifully illustrates the (cough) "tolerance" and (cough) "diversity" in the public school system. Clearly employees can only be tolerant of one side of an issue, and diversity must never include traditional viewpoints.

My thanks to Harry for supplying this information.
Posted by Patrice Lewis at 9:20 AM