The beginnings of building a barn

(Or to be more precise, we're having a barn built.)

This has been a looong time in the planning (and saving). We've needed a barn for years -- ever since we moved to Idaho -- and now it's happening!

Don spent a great deal of time researching kit barns, trying to locate the best bang for the buck. He finally chose to go with a store in Coeur d'Alene called Ziggy's. They provide both the plans and the materials. This is our busy time of year, so we went with the option for them to provide the labor as well.

Last month, the Ziggy's reps came to see the layout of the site. 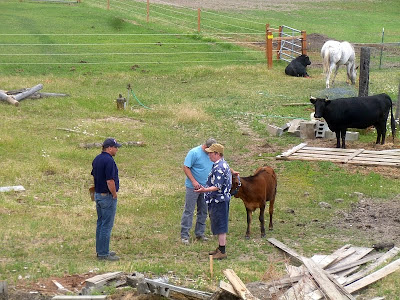 Here one of the reps pets Thor. 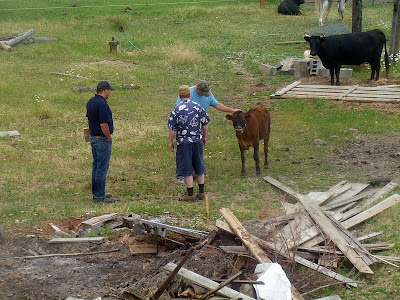 On their way out, they put up a sign to help guide future Ziggy's employees. 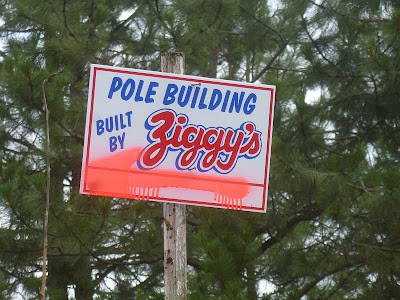 We had to clear the pad where the barn will be built, using both a tractor... 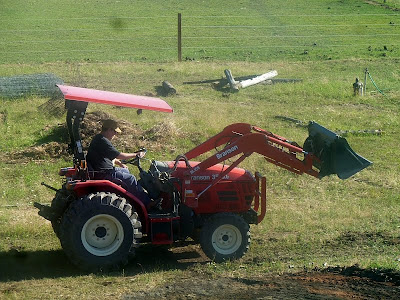 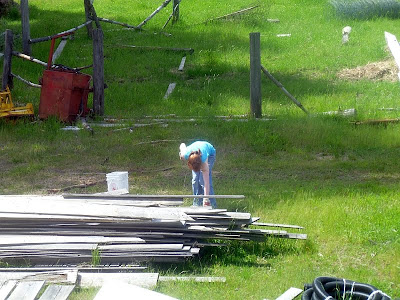 This is the building pad. 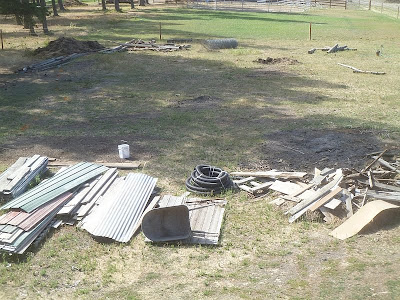 Yesterday was an exciting day -- the materials were delivered. 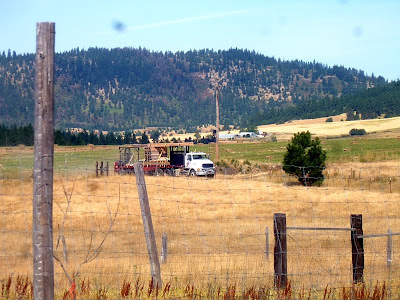 The barn will be 36x50 feet, so the trusses were huge. 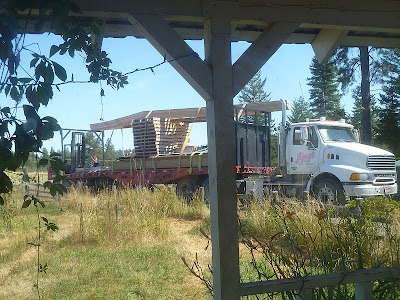 See that black metal frame on the back of the truck, supporting one end of the trusses? It also supported a forklift the driver used to unload the truck. Remember that frame -- it's important. 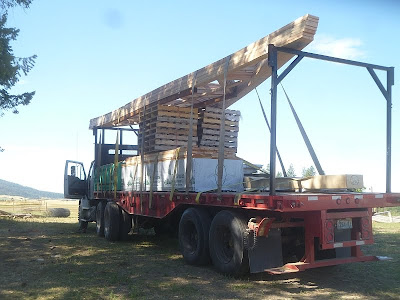 We wondered how a single person with a forklift would be able to lift down those huge and heavy trusses. 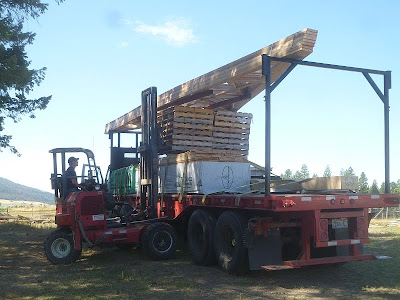 What he did was lift the entire bundle of trusses, carefully balanced on a stack of eight pallets... 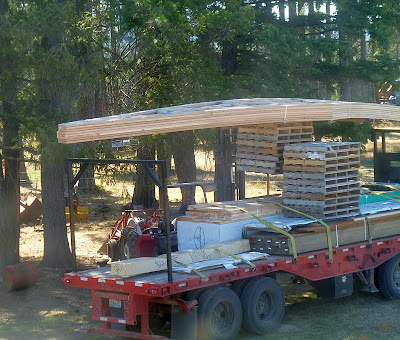 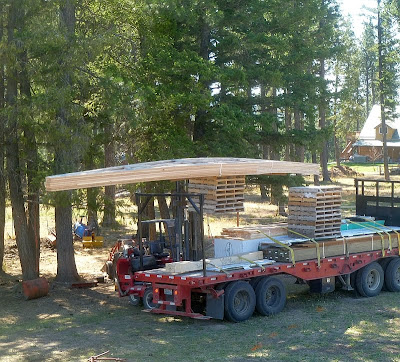 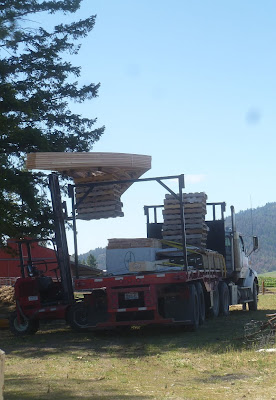 ...and drive the truck out from underneath. At least, that was the theory.

Trouble was, that metal frame at the back of the truck was in the way. The driver couldn't back up the forklift any further because he was blocked in back by our immovable tractor (which has been broken down for months), and he couldn't move the forklift to the left or right and start again because the trusses had to be balanced exactly in the middle. 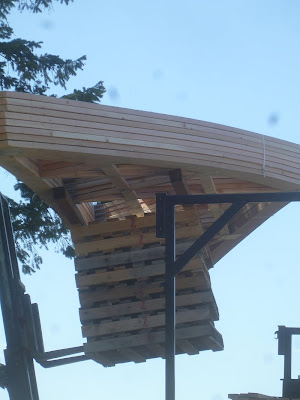 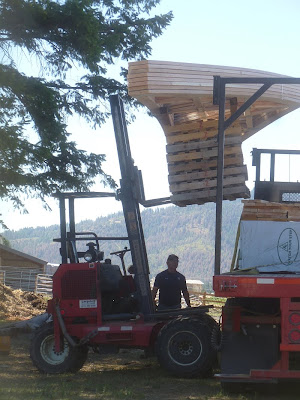 I would have thought the best bet would be to re-settle the trusses on the truck and then move the truck a bit, but believe me, we didn't interfere with the driver's concentration to solve the dilemma himself. In fact, these photos were stealthily taken through a crack in the chicken coop wall so he wouldn't see me taking pictures and get nervous. Those trusses weigh two thousand pounds, and no one wanted to see them crash to the ground. 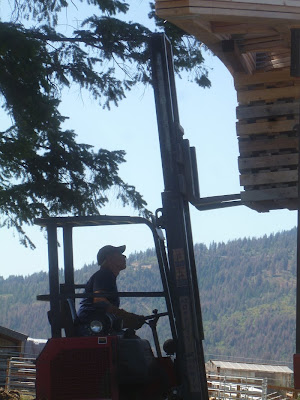 What the driver finally did was to incline the forkleft as far as he could safely go, then inch the truck back and forth, back and forth, until he angled the truck enough to have the metal frame miss the stack of pallets. 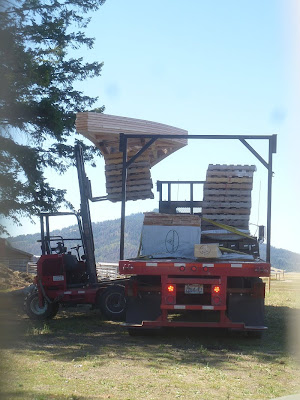 Unfortunately I had to leave on an errand so I was unable to watch the climactic moment when the driver succeeded, but succeed he did. When I returned, all the materials had been unloaded in a huge circle around where the barn will be built. 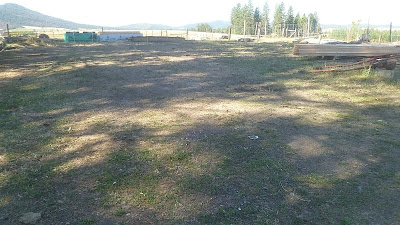 Here are the trusses. 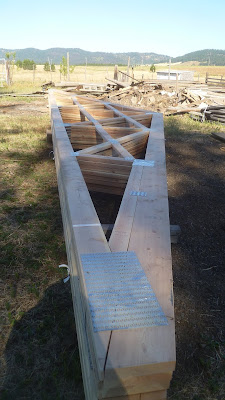 The lower beams in this stack are the pressure-treated 4x6's that will be the uprights for the roof. These beams are 20 feet long. 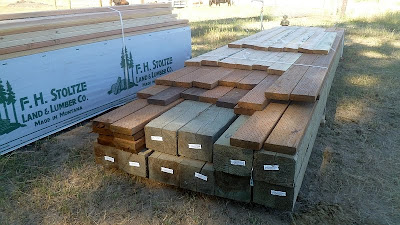 Some of the other materials: sheets of OSB (oriented strand board), tar paper, 2x6's, etc. 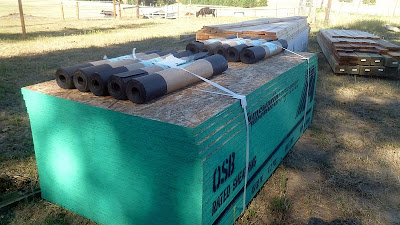 The finished barn will be nothing more than a roof on stilts, but the construction strength will allow for us to add a loft, wings, bays, and other accouterments as time and money permit. We opted not to have Ziggy's side the barn, since we have lots and lots of salvaged sheet metal siding we've collected over the years, so we'll side it ourselves. (This will also save us bucko bucks.) 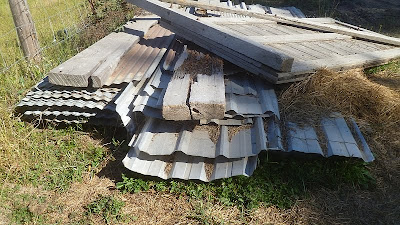 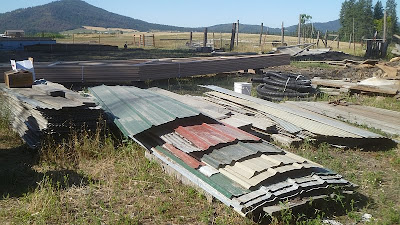 The Ziggy's men will return on Monday to drill the holes and put in the uprights. Unfortunately I'll be in Florida during this process so I won't see it. However the concrete for the unrights will have to dry for a couple of days, and since I return late on Tuesday night, hopefully I'll be able to see (and document) the rest of the building process!
Posted by Patrice Lewis at 10:18 AM