The hay is baled!

Every year, the absentee owner of a 25-acre pasture kitty-corner across from our property lets us bale the grass hay for winter feed. For the last couple years the grass was too thin to make it worthwhile but this year the standing grass was better, due to our wet spring.

So we had the field mowed. 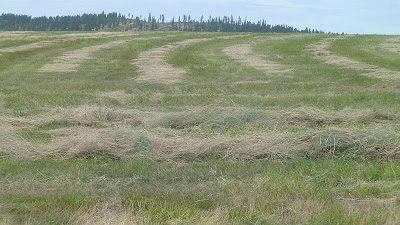 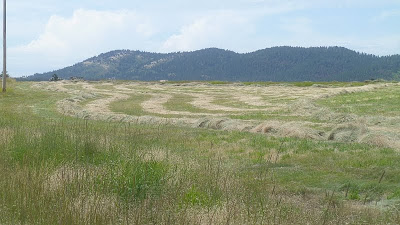 We don't own any mowing/raking/baling equipment, so we can't do this work ourselves. We hire a local farmer to do it for us, but first we must mentally balance the cost of labor with whether or not it would be cheaper simply to buy our hay from someone else. This all depends on hay prices, etc. It's a gamble.

The balers had endless mechanical problems. Maybe it's a good thing we don't own our own equipment for mowing/raking/baling because that would mean the equipment would be forever breaking down on us; and we (meaning Don!) doesn't have the know-how to fix this stuff. (Don is fabulously knowledgeable about many things but, bless his heart, mechanics isn't one of them.)

After the grass hay is mowed, it lies on the ground for a few days to dry. (This is another gamble, namely that it doesn't rain and ruin the cut hay.) After that, the rows are raked into larger 'windrows' to make baling easier. Here's the farmer's double windrow rakes. He lost a tire on one of the rakes which delayed work for a couple of days. 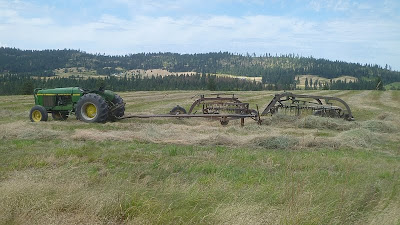 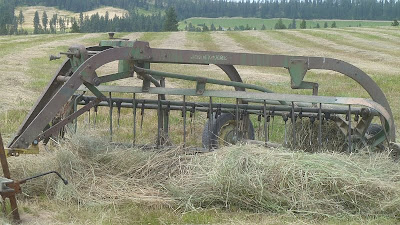 Eventually he got the rake fixed and started forming windrows, which are higher, deeper, fluffier rows of grass hay. 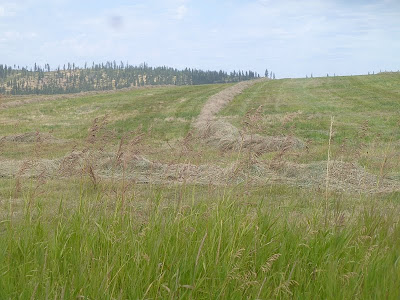 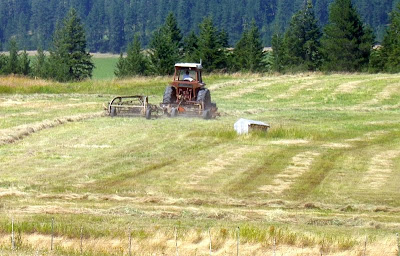 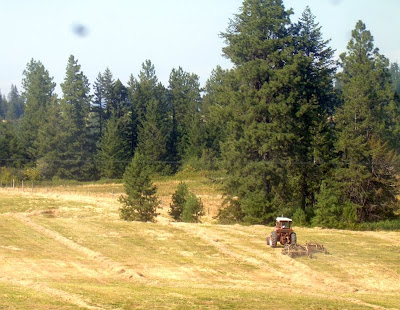 Here's the hay, raked into windrows. It's now ready to bale. Scenery like this is, to me, gloriously beautiful. 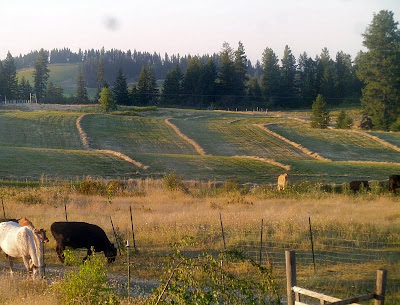 Here the farmer has brought his ancient baler. This year we're getting small bales (about 50 lbs.) instead of large bales (1000 lbs). 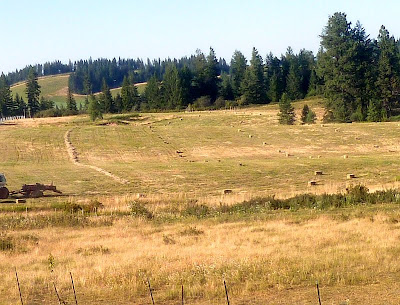 (This field actually belongs to another neighbor, who gave us permission to mow.) 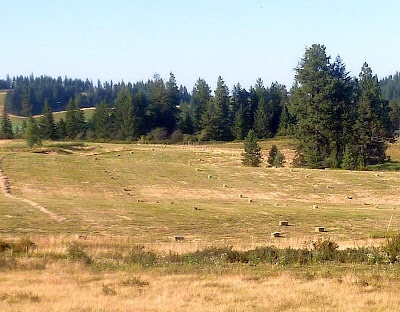 Altogether between the two fields we got nearly 750 bales of hay. 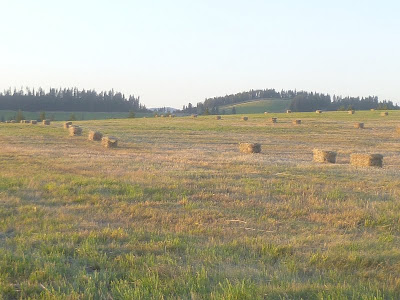 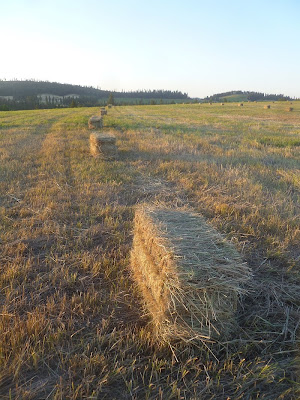 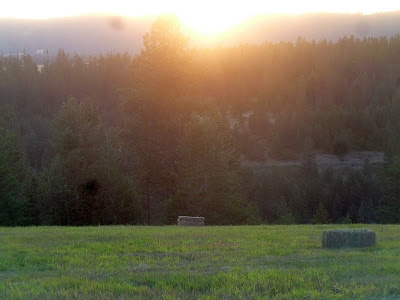 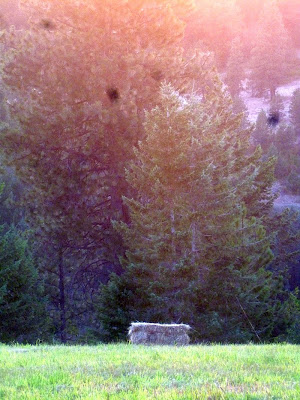 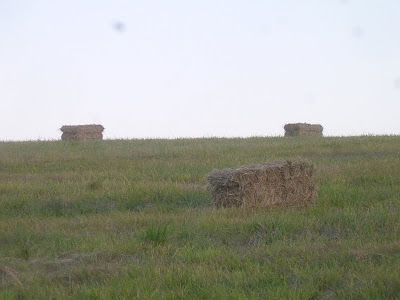 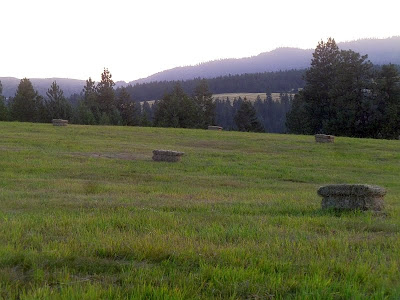 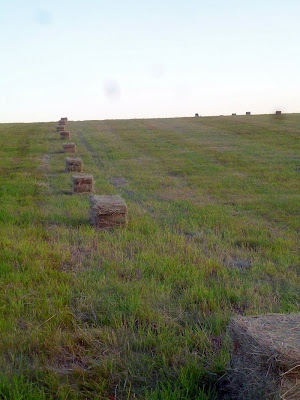 (Sorry for the excessive number of photos, but I think there are few things prettier than baled hay.) 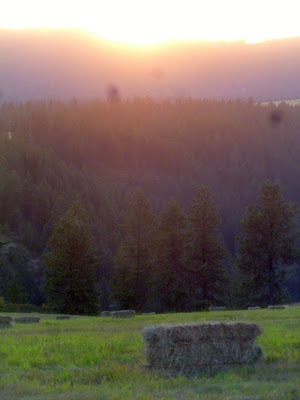 Anyway, we wanted to find out how much each bale weighed so we could more accurately determine the overall tonnage. So we took a sample bale back to the house. 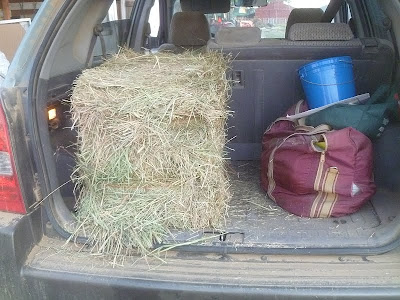 Then we hauled out our bathroom scale... 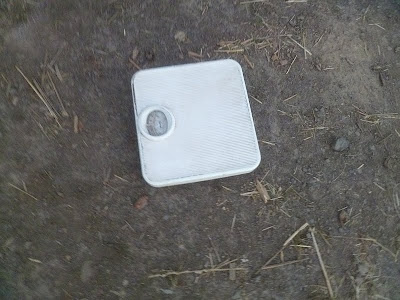 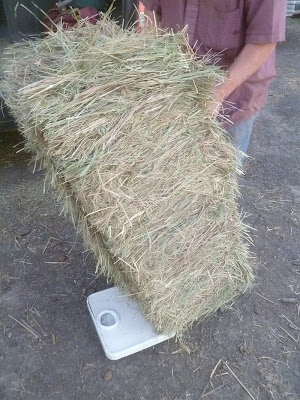 This year we gambled on mowing our own hay rather than buying it. Our total cost was about $1500. Total yield: about 20 tons, or $75/ton. This is not enough hay to get our livestock through the winter, so we'll have to supplement with purchased hay. I think this year we lost the bet -- in other words, it would probably have been cheaper to buy hay. Oh well...

Posted by Patrice Lewis at 2:54 PM