I'm writing this from a hotel room in sunny, gorgeous, humid Florida. Wow, what a change from Idaho!

The flights went very smoothly. In fact, much more smoothly than I anticipated. I haven't flown in eight years so I knew things had changed. I did my utmost to avoid getting a TSA groping -- no metal hairpins, no underwire bra, no jewelry whatever (even took off my wedding ring)... only to find out the Spokane Airport either doesn't use a full-body scanner, or they apparently didn't see the need to send me through one. I merely walked through a metal detector, slipped my shoes back on, and I was on my way. Whew!

(This won't be the case going home, though. I noticed the full-body scanners as I was coming off the plane at the Orlando Airport.)

One thing's for certain, planes have gotten a lot squishier since I last flew. The knee space between my seat and the seat in front was pretty narrow. And when the passenger in front reclines the seat, the space becomes even narrower. Once I was sitting down, it was virtually impossible to move; so on the second leg of the flight I learned to put everything I'd want in the seat pocket in front of me. That's why there are no photos of the first leg of my flight (Spokane to Denver) -- my camera was in my computer case under the seat and I couldn't reach it. 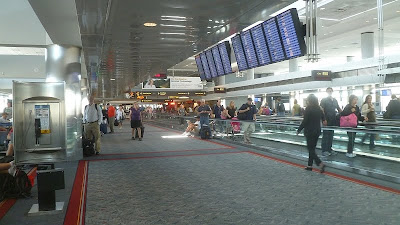 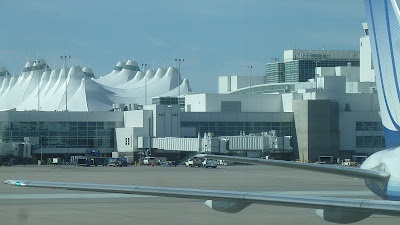 I hadn't eaten anything yet, so I foolishly thought I would grab a bite in Denver. Ug, airport prices. A salad for $13? Not likely! So I didn't get anything to eat until long after I landed in Florida.

I didn't have a window seat on the first leg of the journey so I couldn't see the scenery from the plane. I did on the second leg, however, and what struck me was how vast and open our nation truly is. Not an original thought, perhaps, but it's true. Of course, a lot of the reason for that is how the most critical resource, water, is unevenly distributed. 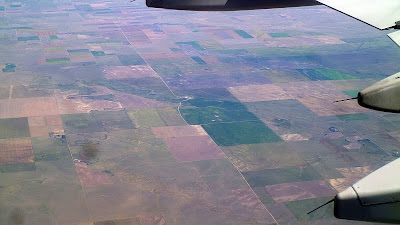 (Sorry for the weird colors, I'm trying to compensate taking these through the window.) 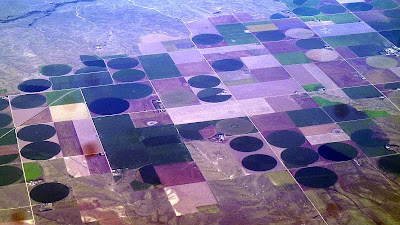 It was interesting to note how geographically isolated all the towns were. 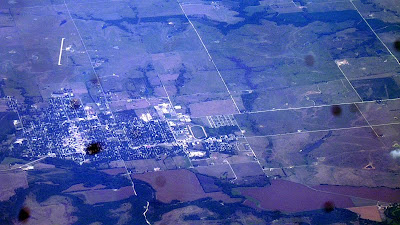 Oddly enough, what kept going through my mind as I peered out the window from 35,000 feet is what kind of rural bugouts some of these places would make. Weird to be a Prepper, ain't it?

Needless to say, things got much greener as we headed east. 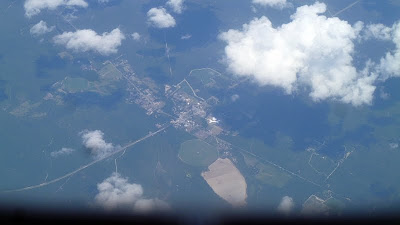 As we came into Florida, we started dodging thunderstorms. Don't know if you can see what looks like torrential rain coming down in the center left of the photo. (Click to enlarge.) 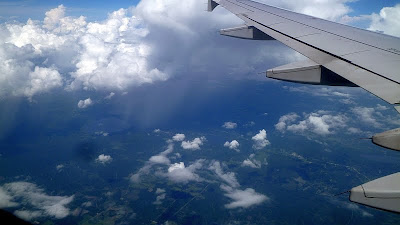 Flying over Florida was fascinating. I've never been to this state except once, many years ago. For some reason I had it in my head it was wall-to-wall urbanity, but it most certainly is not. In fact, vast stretches looked like pristine wilderness. That's what made the contrast between the suburban development we flew over, interesting. 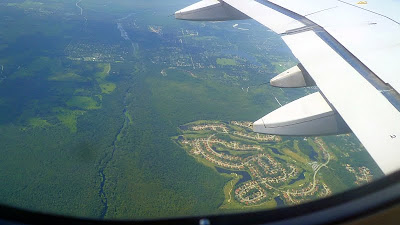 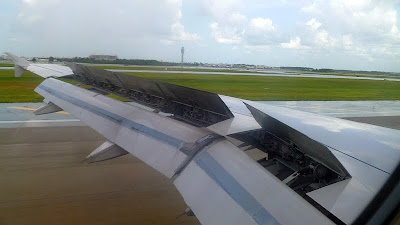 I realize now it would have been better to fly directly into Tampa rather than Orlando, but all this time I thought the studio was located in Deland, not Largo. (Deland is the location from which the show is broadcast, or something like that.) At any rate, I drove a couple hours to get to Largo and it gave me a chance to see a bit of the state, including this rather startling billboard: 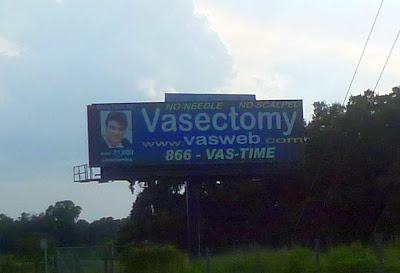 I passed all sorts of attractions, including a place that featured dinosaurs. 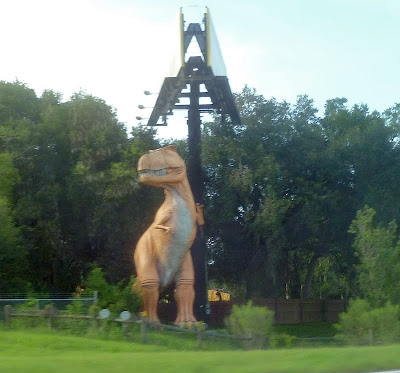 Here's an neat-looking ampitheater, I believe as part of a fairgrounds:

Downtown Tampa has a beautiful skyline.

Right after Tampa, I suddenly found myself on the enormously long causeway over an ocean inlet of some sort. I think it was Tampa Bay. Wherever I was, it was impressive!

Still on the causeway, coming toward Largo. 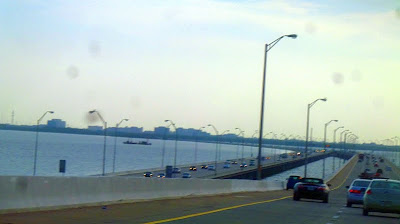 I found my way to the hotel without any problem and pretty much collapsed for the evening. I also learned what I'd forgotten to bring -- sandals. I'd like to see the beach but can hardly walk around in my church shoes, which I wore on the airplane, so I'll be hitting someplace cheap today and getting flipflops.
Posted by Patrice Lewis at 4:00 AM