Update on the wheat field

Some of you have been asking for an update on the wheat field. 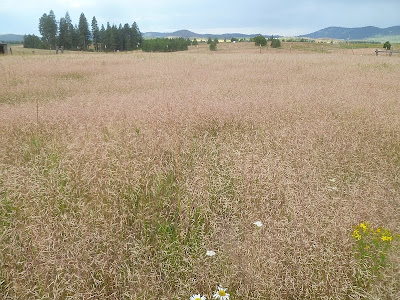 Pretty impressive, isn't it? Until you realize one critical thing: This isn't wheat. Unfortunately what you're seeing is a pervasive invasive weed called cheatgrass, called so because it "cheats" and drops its seeds earlier than any other native grass, thus spreading very rapidly. 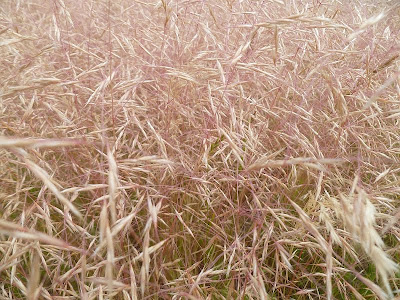 Fortunately there IS wheat mixed in. But sometimes it's hard to see. 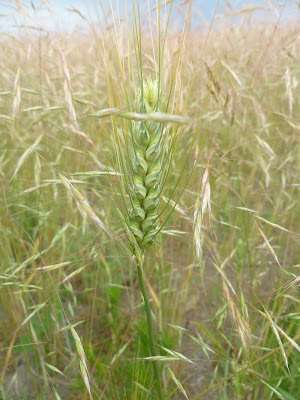 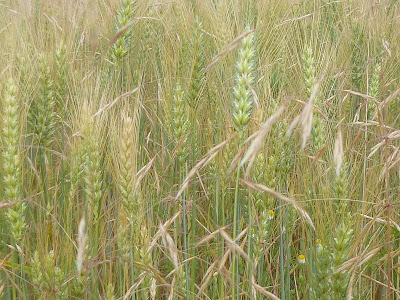 Don and I have had endless discussions on what to do about the cheatgrass. It's probably controllable through pesticides, but I'm not sure. Most pesticides are not species-specific, and since wheat is a grass just like cheatgrass is a grass, I don't know if we could use a pesticide to control it. And we don't want to either. We have no objection to the occasional judicious use of a pesticide, but not over a whole field! 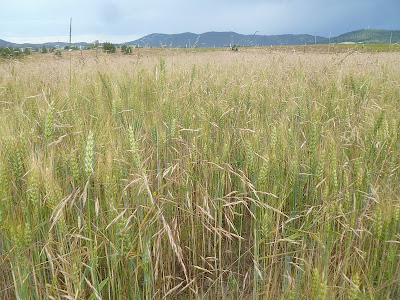 The problem is we're growing hard red winter wheat. Winter wheat is sown in the fall, goes dormant over the winter, then grows in the spring and matures in the summer. We want to grow a hard (as opposed to soft) wheat because that's the kind of wheat used to make bread. (Soft wheat is used for pasta.)

But because the wheat is sown in the fall, we can't control the weeds in the spring by plowing. So what we've decided to do is tough it out and harvest what wheat we can this year... and then re-plow the field and not plant in the fall. Come spring we'll plow and re-plow and re-plow the field -- in other words, mechanically destroying the cheatgrass -- and then sow a hard spring wheat. 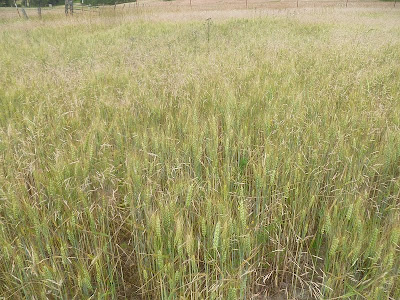 Our winter wheat will be ready to harvest in a few weeks. We'll see how much we get -- and how hard it is to separate from the cheatgrass!

This project has taken on positively biblical proportions...

Matthew 13:24-29
Jesus told them another parable: “The kingdom of heaven is like a man who sowed good seed in his field. But while everyone was sleeping, his enemy came and sowed weeds among the wheat, and went away. When the wheat sprouted and formed heads, then the weeds also appeared.

The owner’s servants came to him and said, ‘Sir, didn’t you sow good seed in your field? Where then did the weeds come from?’

'An enemy did this,’ he replied.

The servants asked him, ‘Do you want us to go and pull them up?’

‘No,’ he answered, ‘because while you are pulling the weeds, you may uproot the wheat with them. Let both grow together until the harvest. At that time I will tell the harvesters: First collect the weeds and tie them in bundles to be burned; then gather the wheat and bring it into my barn.’”
Posted by Patrice Lewis at 7:53 AM