I am writing this from a coffee house in Portland. 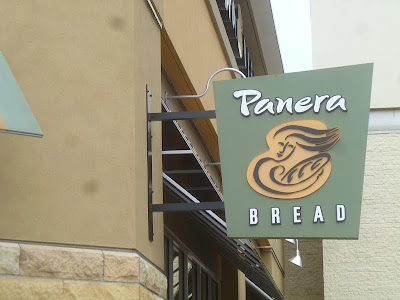 I'm sitting here with my dear friend Wendy, who is also a writer. 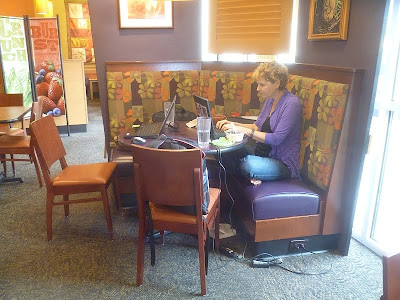 As she so succinctly put it, is there anything better in the world than writing in a coffee house with a dear friend?

I traveled to Portland yesterday on a long but uneventful drive. I passed through the verdant Palouse region and noted how many crops I could see: wheat, lentils, garbanzo beans, barley... 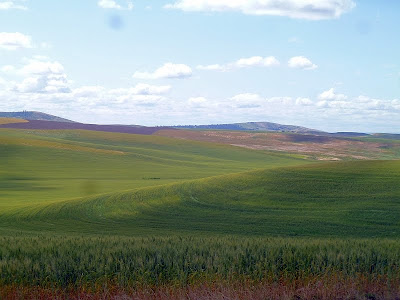 Sometimes the fields stretched to the very edge of the sky. 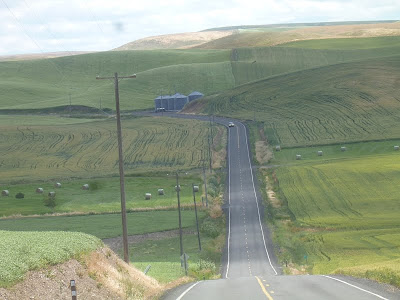 Often I got shots merely by holding up the camera to the window while driving and hoping for the best. 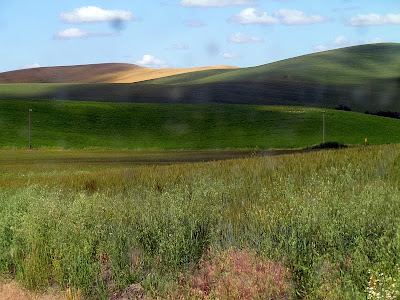 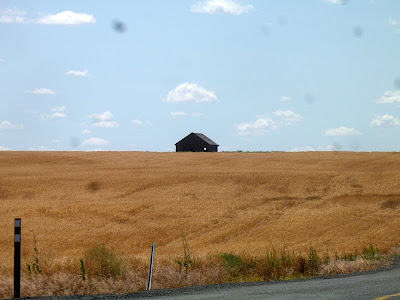 That's a farm, waaaaaay off in the distance, almost on the horizon. (Click to enlarge.) 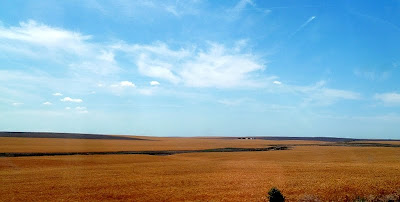 After about four hours of driving, I passed the Tri-Cities area of southeast Washington and hooked a right toward Portland. 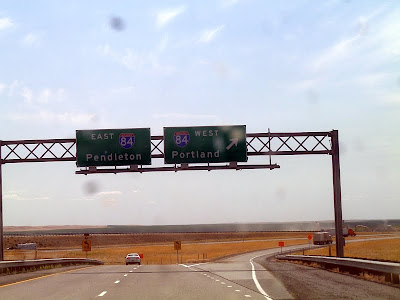 The landscape got much drier, but we were paralleling the mighty Columbia River. This is a huge river. Eventually I also got to see Mount Hood looming up in solitary splendor (middle left). 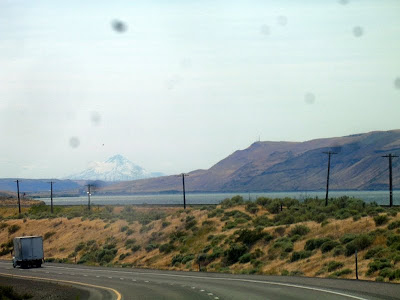 The Columbia River Gorge is perpetually windy, so it's a natural place to put up those huge windmills, of which there are hundreds. 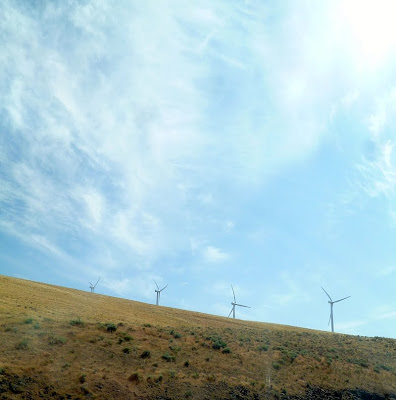 The farther west I got, the higher and rockier the cliffs become. 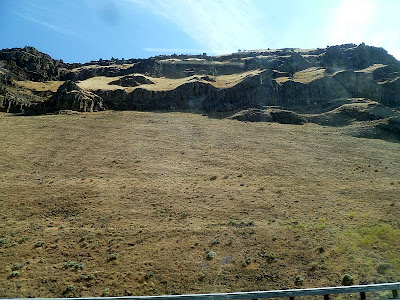 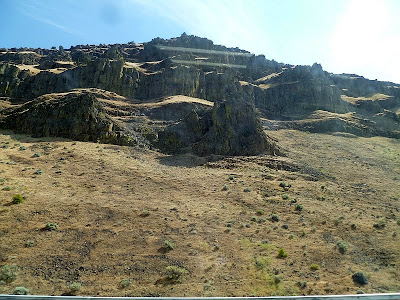 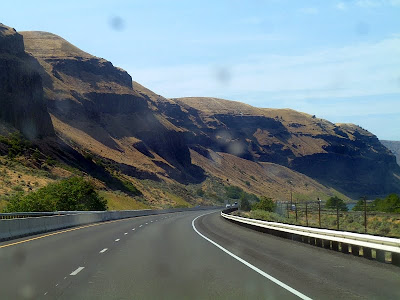 And all the time I'm following that mighty Columbia. Here's a barge. 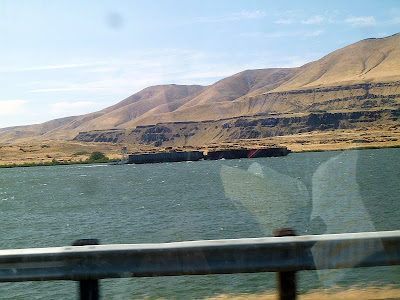 Gradually the terrain became more verdant the closer I got to Portland. 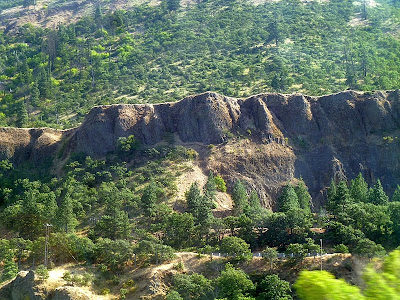 About 30 miles outside of Portland I decided to take a small indulgence, which was to get off the main highway and follow the Historic Columbia River Highway for 14 miles, which has spectacular scenery and many waterfalls.

I stopped at Horsetail Falls to stretch my legs. 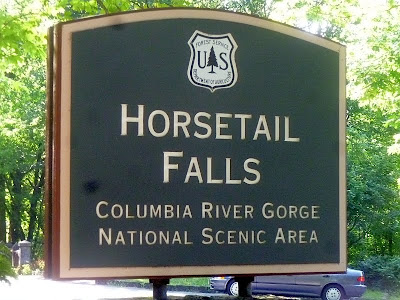 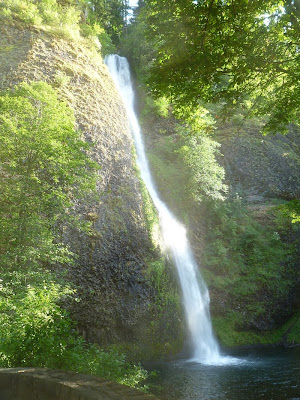 Here's the very very top of the falls. Notice the log across the stream. 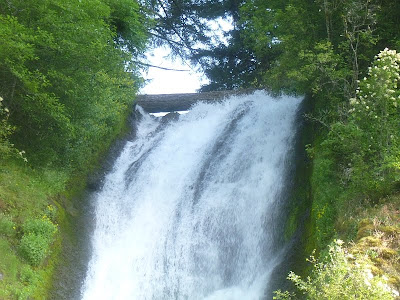 Here's the bottom of the falls. 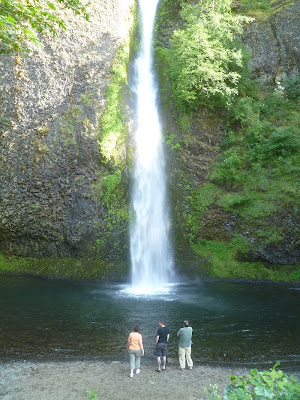 Next I stopped at a place called Oneonta Gorge. 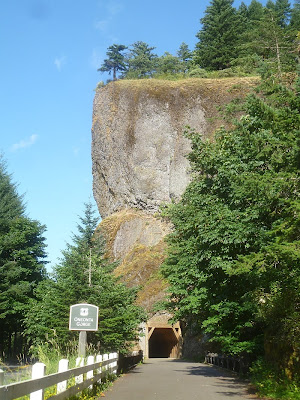 The bridges along this historic highway are works of art. 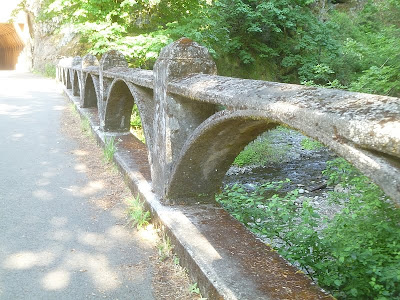 The path along the road had a pedestrian tunnel through the cliff. 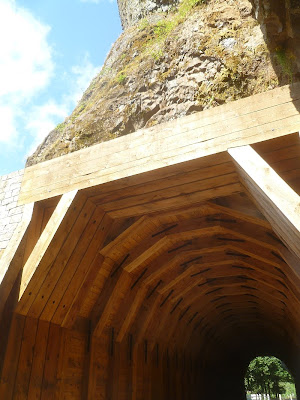 This gorge has a logjam that occurred a few years ago. You can see the scale of the logs by the people nearby. 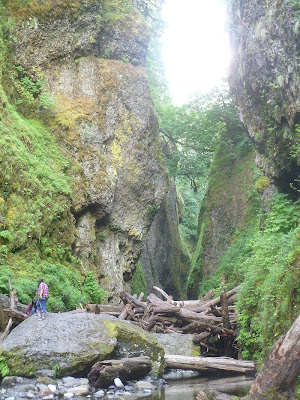 But the highlight of this scenic area is Multnomah Falls. 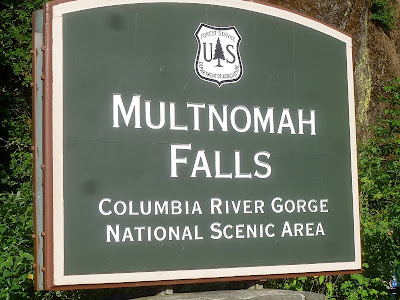 At 620 feet, it has to be seen to be believed. Spectacular. 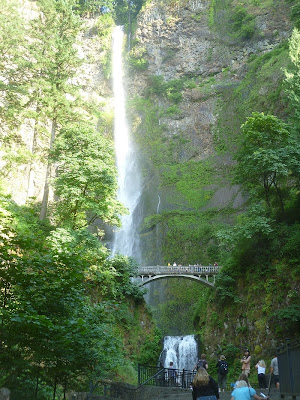 The falls are in two sections: the upper fall is 542 feet, the lower falls is 69 feet. There is a bridge spanning the break between the two. Here a party is horsing around on the bridge. 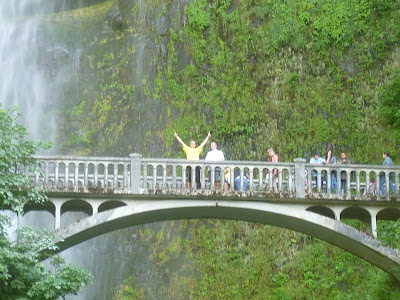 A few years ago, the girls and I stopped at Multnomah Falls and we hiked up to the bridge. It is spectacular, except the moment -- literally the moment -- you set foot on the bridge, you are instantly drenched with a powerful misty spray. Nice on a hot day, not so nice on a cold day. But oh my gosh, the power of the water!! 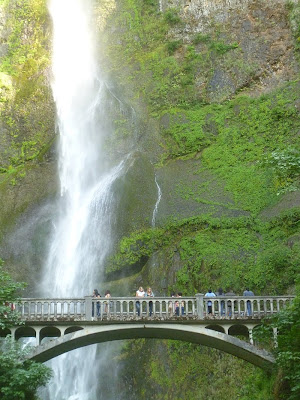 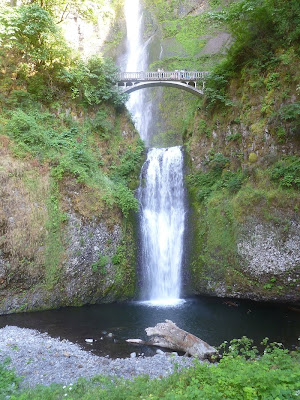 The nice thing about Multnomah Falls is it is right off the highway. At 620 feet high, it's a little hard to miss.

Anyway, enough sightseeing. I made it to my friend's house, where I was thrilled to see my book in a place of honor in her kitchen. 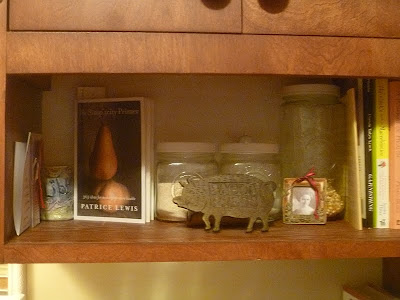 Posted by Patrice Lewis at 9:40 AM