The sad life of little Pop

As you know, we've been hatching eggs in a tiny incubator sitting on our kitchen counter. 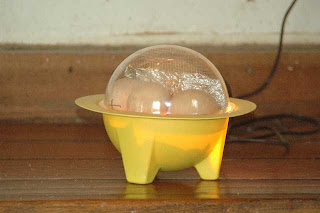 On Saturday as I was standing near the incubator, I heard a peep. An egg was hatching!

All day long we listened to the chick peeping from inside its shell as the girls grew more excited about a new chick.  The peeps were strong, but it wasn’t until 9 pm that the first tiny hole appeared in the shell. 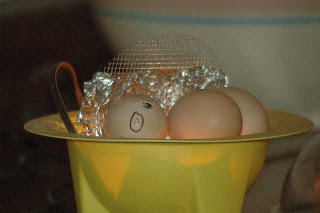 By the time the girls went to bed around 10 pm, the chick had managed to get about an inch of shell opened. 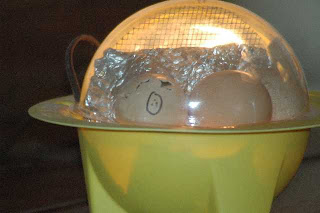 After this the chick, whom we called Pop (since we already had Snap and Crackle) appeared to be taking a breather.  There was no further progress so, confident that all would be well, I went to bed around 11:15 pm.  Big mistake.

At 4:30 a.m., Lydia had to go outside, so I hauled my weary body out of bed and downstairs.  After so much anticipation of waiting for Pop to hatch, I saw a scene of such miniature carnage that I was glad the girls were still asleep.

The first thing I saw was that the lid to the incubator was off.  For a confused, sleepy moment I wondered if the chick had hatched and one of the girls had taken it to bed.  (Understand, this thought came after five hours' sleep.) 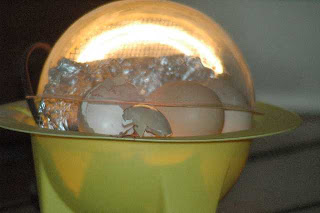 What actually happened, apparently, was the chick had managed to push aside the lid in his struggles to get out of the egg.  Then he fell onto the kitchen cabinet and flopped around.  Still attached to his placenta, he had then fallen three feet onto the floor where, if the yoke marks are any indication, had struggled in a crescent pattern about sixteen inches long and then wedged himself under the stove. 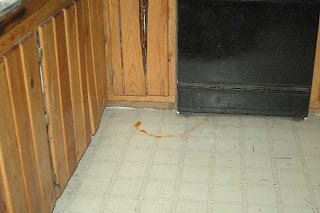 That’s where I found him.  I don’t know how long he had been there, but the thick smeared yoke where he hit the floor was nearly dry, and the chick was very cold.  I immediately scooped him up - he struggled feebly in my hand so at least he was alive - and put him in a box under a heat lamp we had ready. 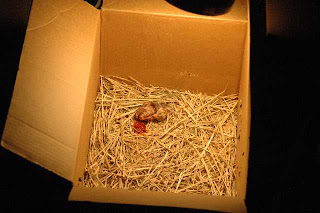 Then, because the straw in the box seemed too harsh for such a struggling, tender body, I put an old clean rag under him instead. 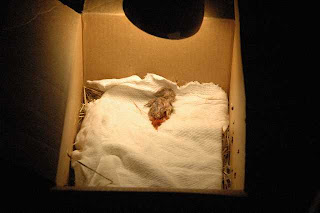 This chick was a fighter.  Warmed by the light, still attached to the placenta, he was breathing and slowly flopping around.  By 5:25 am, having dried off a little, he was lifting his head and peeping. 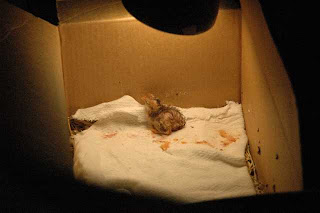 When the girls woke up, at first they were thrilled that the little guy had made it after such a hard start.  But as the day went on, it soon became apparent that little Pop was a very sick chick.  Normally chicks are on their feet within a couple of hours at most.  Pop's legs were still curled under him, and he couldn't walk.  It soon became apparent that he seemed to be blind, too.  Worst of all, there appeared to be a slit in his abdomen near the cloaca, with what looked like small loops of intestines poking out.  Undoubtedly this was a result of both the fall off the kitchen counter, and how chilled he was when I found him. 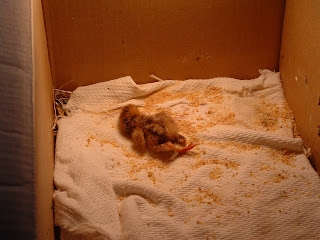 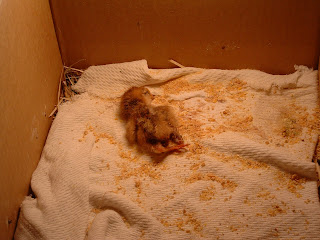 We tried to get him to eat, but he couldn't.  I did manage to get some water down him, but that was it.

After 24 hours, we knew we had to put little Pop out of his misery.  My husband, being a true Man who doesn't flinch when facing unpleasant tasks, did what needed to be done and administered a merciful .22 bullet into little Pop's body to end his struggles.

Perhaps it seems immature or ridiculous to get overly emotional over a one-day-old chick, for Pete's sake.  After all, we routinely butcher chickens and steers without blinking an eye.  But these are animals raised for that purpose, and had a happy life until they met their fate.  Poor little Pop didn't have a chance from the start, yet he bravely struggled on when he should have died.