A few weeks ago we bought some hay from a neighbor.  These bales are about 600 lbs each and we have 30 bales, so that gives us nine tons. 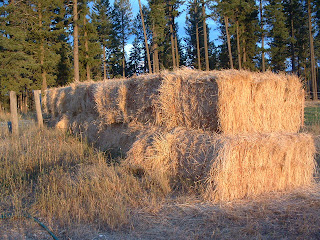 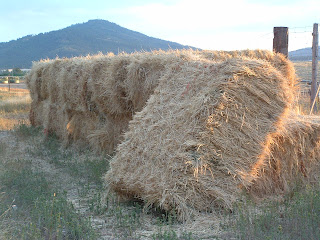 (Oh, see that tipped-over bale?  It was butted over by Gimli, our Dexter bull, in a moment of playful high spirits.  Bulls are strong.)


We have three tons left in the barn from last winter (which we'll use up first) for a total of twelve tons so far.  That's about half what we need to get us through the winter, so we're in the market for another twelve tons.

We didn't bother mowing and baling ourselves this year since the grass was too thin and not worth the cost of hiring our favorite local farmer to mow and bale for us.  We'll probably buy our hay from this fellow, though.

First thing we had to do was fetch the tarp that we (ahem) kinda sorta left out in the field after moving the hay into the barn last fall. 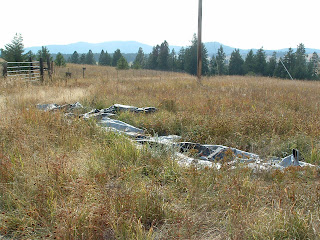 We started by collecting the old tires we use to anchor the tarp against wind. 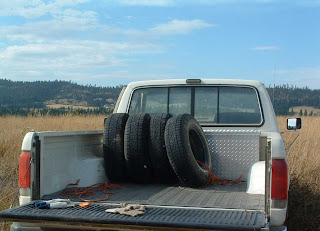 Surprise!  A nice-sized wasp nest made Don jump when he turned over the last of the tires. 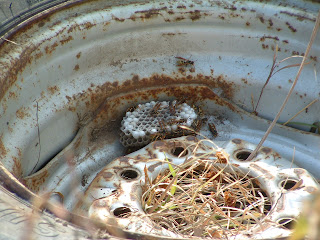 Luckily no stings, but we walked back to the house and fetched the wasp spray nonetheless. 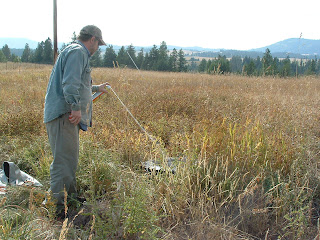 Found another, smaller nest under a fold in the tarp.  We dispatched that one as well. 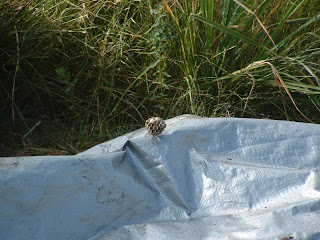 Under the tarp we found a plethora of voles as well as this fat fellow, a rubber boa.  He was slow and lethargic, either because he was digesting a nice fat vole, or because of the cooler temps we've been having.  Or both. 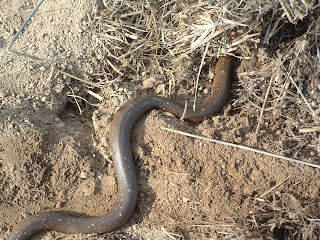 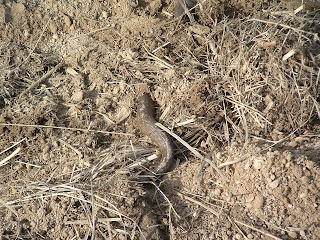 Without further mishap, we bundled the tarp into the truck and ferried it home. 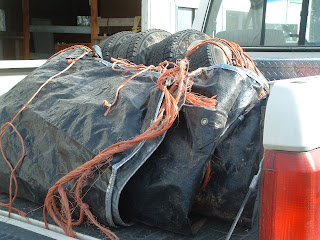 However we foolishly decided to wait until the next day to tarp the hay.  I say "foolish" because the next day we had 30 mph winds.  Always fun to try and control huge tarps in high wind!

Nonetheless we persevered and managed to get everything buttoned up in time. 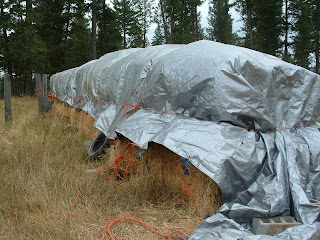 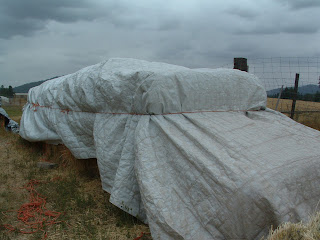 (You can see the swollen clouds as rain moves in.)

The hay won't stay here for the winter, of course.  We'll move it closer to where the animals are fed through the winter.

But at least for now the hay is safe.
Posted by Patrice Lewis at 10:53 PM