I haven't been taking as many "random pix" as I normally do because my camera has so much dust behind the lens that there are black blotches over all the resulting photos. I took it into a camera repair shop and was quoted $99 for cleaning (since essentially the entire camera would have to be disassembled and re-assembled), so I may as well get a new camera. However that's not on our immediate horizon, so please forgive the blotches, since at least the camera can still record our daily lives.

Anyway, here are some random pix from the last few weeks.

This is what our barn looked like last August, stacked full with hay. 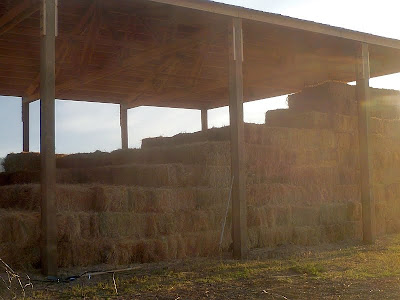 This is what it looked like a couple weeks ago. It looks severely depleted, doesn't it? (At least from a let's-hope-we-have-enough-hay-to-last-us-all-winter perspective.) 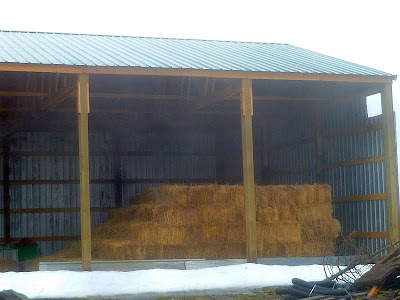 Fortunately from a front view, there's more hay than it seems. Still, I don't know if we'll have enough to last through spring. We'll probably end up having to buy two or three tons. 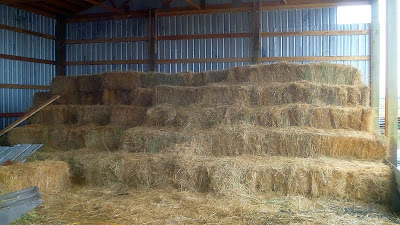 One evening after the sun went down, we had an odd little kickback of color on a single bit of mist. 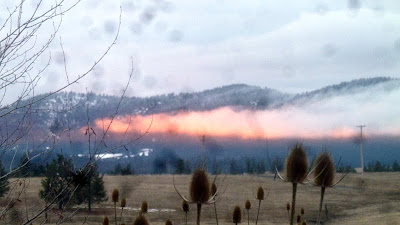 The house, lit with candles and oil lamps, a few minutes before our neighbors arrived for our weekly potluck (we alternate houses -- it was our turn to host). 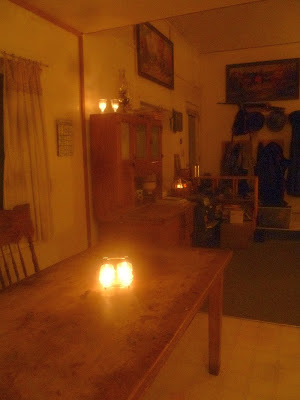 Here's Younger Daughter's fiddle teacher, jamming with one of his sons and two of his students. Music constantly fills this house. 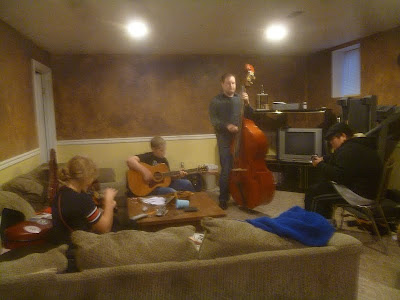 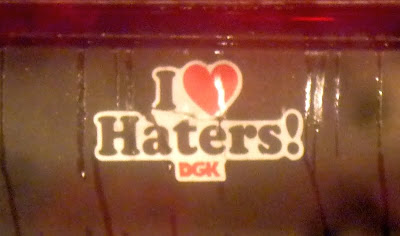 One of our Aracauna hens, perched on Polly's pen door. 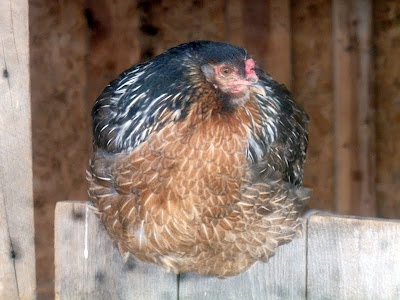 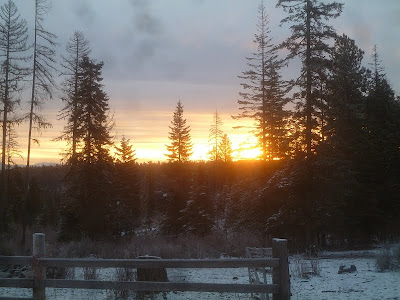 My mother, who sews beautifully, made a cloak for Younger Daughter. It arrived in the mail last week. It's so so warm! And she loves it! 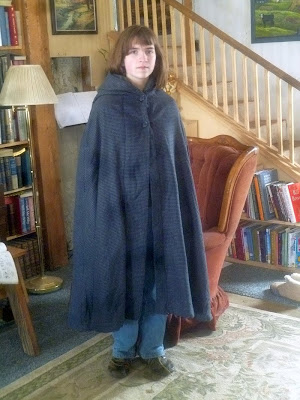 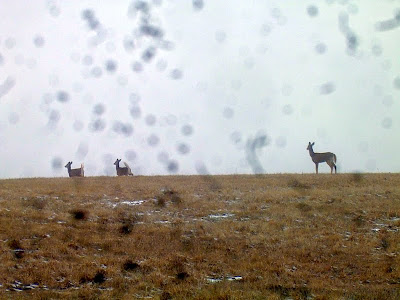 For her 16th birthday, some friends gave Older Daughter a Kindle. Don also had a Kindle, but he dropped it and the screen broke. (An advantage of books over electronic media, right?) Anyway one day Older Daughter was reading in front of the woodstove and Major, our old lab/hound mix, was lying next to her. Don had the idea to put the broken Kindle in front of Major. 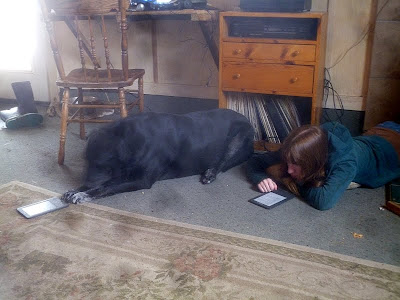 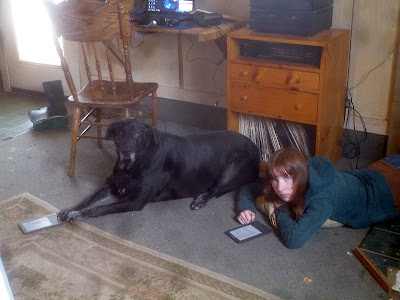 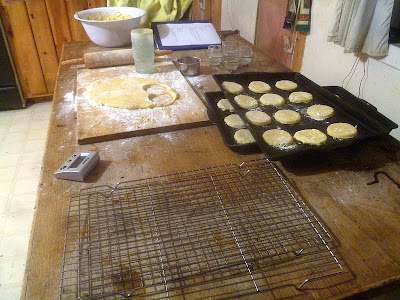 ...with the help of my faithful companion. 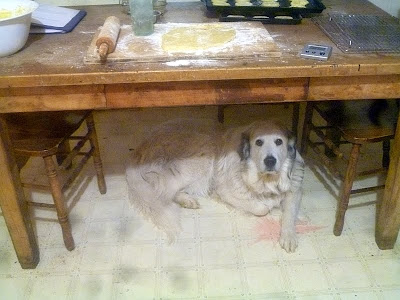 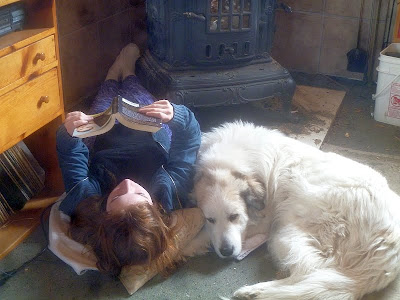 Bringing in some leftover lasagna from our "outdoor refrigerator." 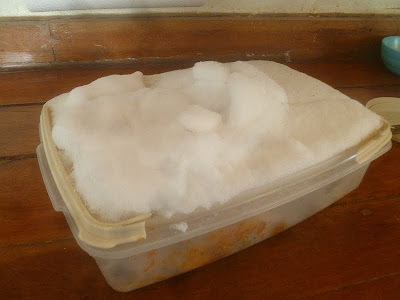 Local gas prices as of Feb 23. I'm going to start documenting them again because every indication is they're going up, up, up. I know some parts of the country already have $5 gas. 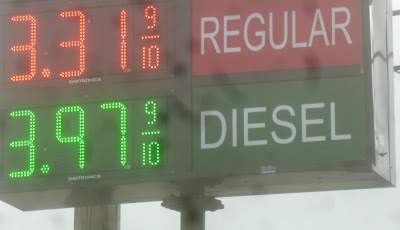 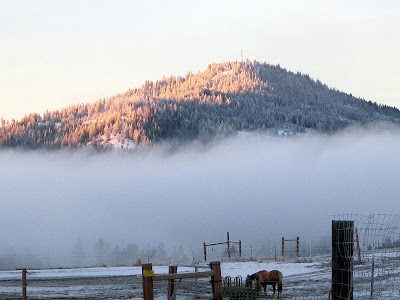 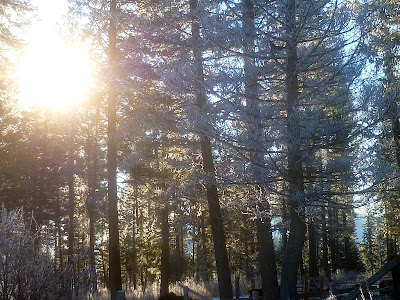 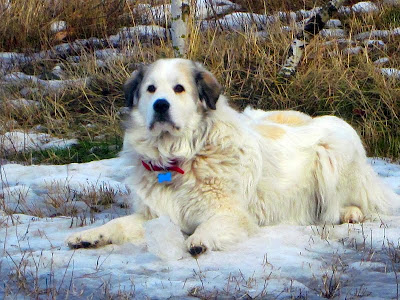 Posted by Patrice Lewis at 7:15 AM