Major's back! Really he is! 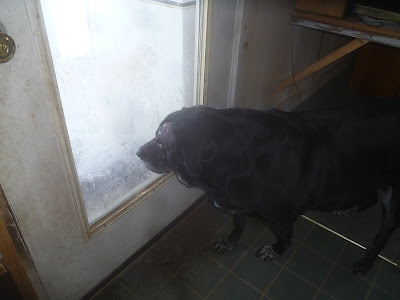 We had, as you can imagine, a most depressing day. I tried doing schoolwork with the girls, but when Younger Daughter broke down during math, I knew it was useless. Instead we all busied ourselves with unnecessary and trivial tasks, trying not to look at the clock. Major's vet appointment was at 2 pm.

So with sorrow we said goodbye to our old friend and I helped Don load Major into the car. Then the girls and I spent another hour busying ourselves with unnecessary and trivial tasks, trying not to think about what was happening.

But then Don called us from the vet's office and said Major is alive! The vet looked at that horrible lump on his head and determined it was a serious but treatable infection. The girls and I burst into tears. Suddenly we all felt fifty pounds lighter and set about tidying the house with gladsome hearts, laughing, giddy with relief. 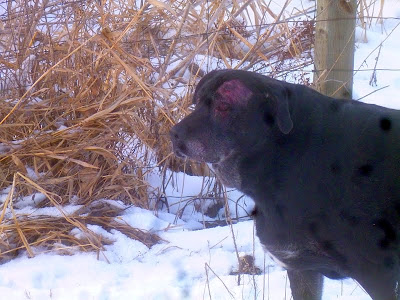 It seems that an infection somehow got under the muscle on his forehead and was wreaking havoc. Frankly it was a near thing, the vet said. How he got the infection isn't known; it may have actually entered through his eye.

So now Major's home and Lydia is happy! He's still a bit dazed and probably quite uncomfortable. He's facing two weeks of antibiotics, warm compresses twice a day, and a diet. But he's home! 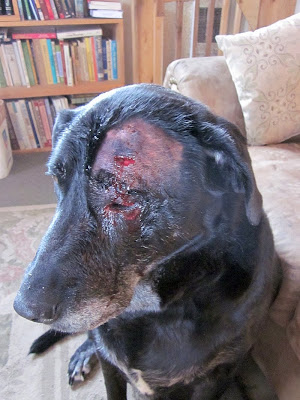 I can't thank you enough for all your kind thoughts and prayers. I'm just so durned happy they weren't needed!

Major is still a senior citizen and we don't know how much longer we'll have him, but it sure is nice to put off the inevitable for the time being.

Welcome back, Major!
Posted by Patrice Lewis at 3:31 PM