Oh the weather outside is frightful...

Well, winter has arrived with a roar.

It started Tuesday morning when we woke up to a gentle blanket of snow.  I took these shots very early in the morning.  Very pretty and peaceful. 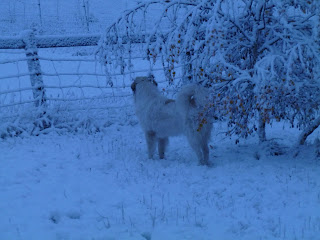 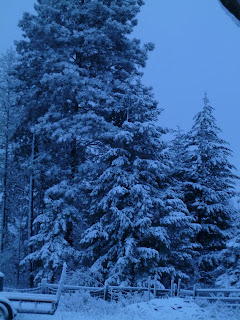 It was only a couple of inches so it was no big deal. 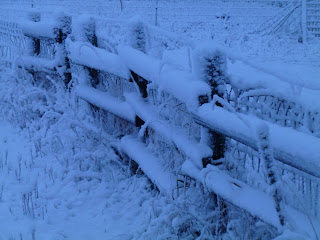 It's always amusing to watch chickens dealing with something they've never seen before. 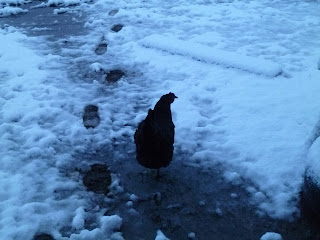 Matilda wasn't sure what to make of this stuff either. 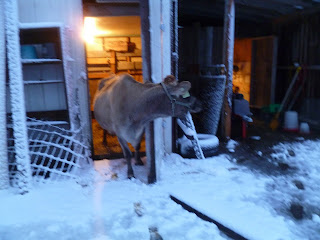 Here's Matilda's and my tracks as I led her through the driveway back to the woods. 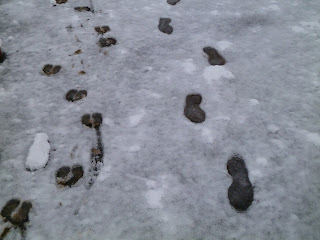 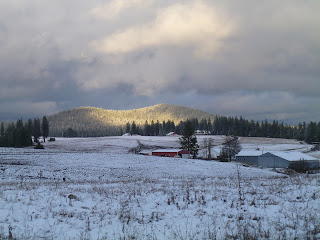 Well, that quiet interlude lasted until about 10 am, when the wind picked up and it was miserable.  But the temperature also rose and melted off most of the snow, so it was a tradeoff.

Fast forward to Sunday.  We'd gotten a little bit more snow but nothing significant.  On Sunday afternoon, Don and the girls went on errands and I stayed home to get some wood stacked.  The butte to the south of us looked like it was "onding on snow." 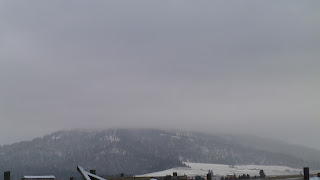 Sure enough, within a few minutes a snow squall obliterated the butte. 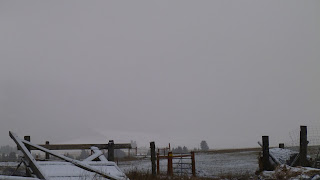 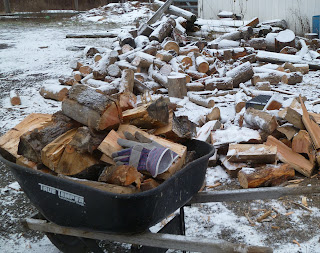 ...transferred to the porch, adding to what was already there. 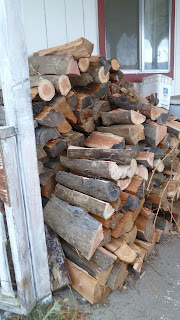 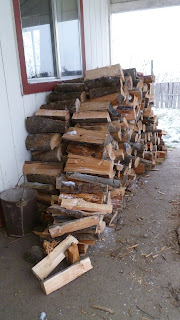 I also cleaned out Matilda's pen. 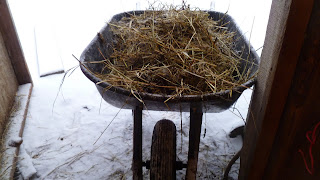 This morning it was cold and windy.  Here I am kitted out to feed the beasties. 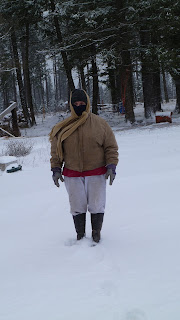 The cows looked rather encrusted. 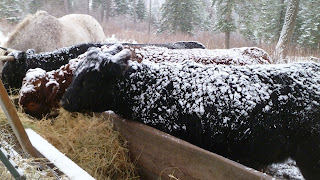 We have a small backblade on the tractor.  Don had to plow out the driveway because it had drifted shut (a common occurrence). 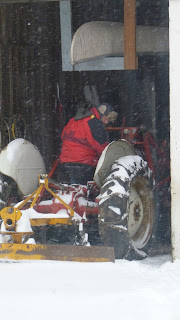 Then Don checked the weather for this evening and we saw this: 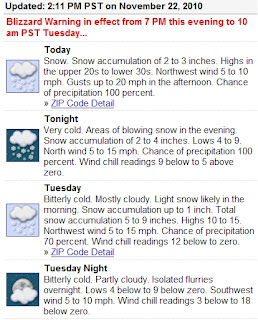 It's not often we get a blizzard warning for these parts.  More often then not, dire predictions fizzle out and not much happens.  Still, it's not a warning we can ignore.  This is when I'm so thankful we work at home.

Whenever we have both snow and wind, we're almost instantly drifted shut. It's like there's a vortex effect at the end of our driveway, so our nearly two-mile non-county (meaning, unplowed) dirt road can and often does drift closed, as well as our 300 foot long driveway. I mean, we had two inches of snow last night, and with the wind we had today the driveway already had some 18 inch drifts, for pete's sake.

It's also a good time to finally pull together something we should have done a long time ago: a car emergency kit.  I've been locating the items and piling them in various places. 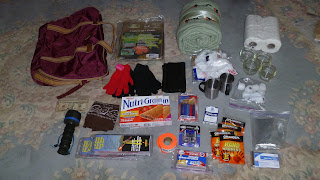 What we still have to add:
- Paracord (narrow but very very strong)
- Come-along (for winching out of ditches)
- Shovel
- Something to read, probably those mini New Testaments

What's conspicuously absent is water.  It would freeze, so we're not sure how to handle that.  We can scoop snow and melt it over a candle flame, so that's our plan for the moment.

I put most things in plastic ziplock bags for a bit of extra waterproofing. 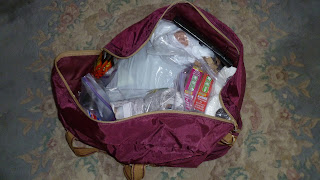 Here's the zipped up kit.  What a nice feeling to have that all pulled together. 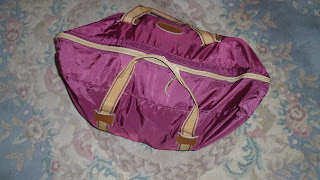 We battened down the hatches and prepared to be without electricity, just in case the wind knocks out a power line.  We filled every jug in the house with water (if the power goes out, our well goes out). 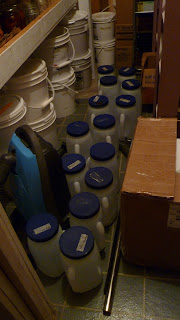 We all took showers.  I caught up on laundry.  I'll make sure dishes are done before bedtime.  We have plenty of firewood for heat, propane for cooking, and oil lamps for light.  If the power is still out when the temperature drops, we're even prepared to bring the chickens into the washroom to keep them from freezing.  Hey, whatever works.
Posted by Patrice Lewis at 5:20 PM