I've been following with great interest the furious anger travelers are feeling at the intrusive, indecent, invasive "security" requirements now in place in many airports across the country.  Gee, do you opt for a full-body scan that administers large doses of radiation and strips away your clothing and reveals your naked body in front of perfect strangers?  Or do you "opt out" and get harassed, humiliated, and sexually fondled by a bunch of TSA employees who (let's face it) may or may not like what they're doing?  Do you strip-search Granny in her wheelchair while letting the hajib-wearing Muslim woman pass because searching her would be "against" her religion? 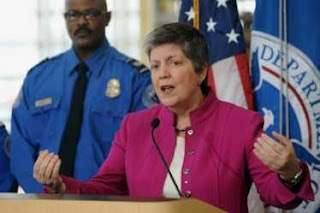 So I came across this article that reports how lawsuits are being prepared against Janet Napolitano for the ugly turn these "security" jokes are taking.  Janet Napolitano, if you recall, is also the one behind the Department of Homeland Security’s report on Rightwing Extremism which pretty much classified anyone who is a conservative as a domestic terrorist.

And it suddenly dawned on me...Very simply, Janet Napolitano just doesn't like us, does she?

This woman is responsible for stripping ordinary American people of their dignity, their patriotism, their strength in numbers, their concerns about our government and the economy... in short, she and her ilk think most American citizens are a bunch of dumb sheeple, and the sooner they whip us into shape (meaning, submissive and compliant), the better.
Posted by Patrice Lewis at 7:55 AM