The philosophy of feeding

Last week we moved the cows to their winter quarters, the wooded side of our property.  Normally we feed them through the winter since, of course, they can't graze through snow.  But since we haven't had any snow yet, and since we're trying to preserve our hay supply, we've been letting them pick through the remaining grass in the woods. 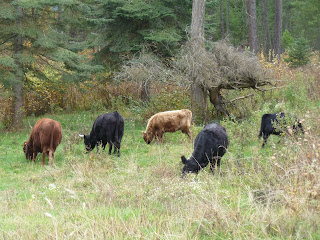 But a couple days ago we thought we'd better start feeding.  The calves had never been fed at the feed boxes before, so it took them a day or two to figure out that free food magically appears in the feed boxes twice a day.

Now the calves "get it."  In fact, everybody "gets it."  Mornings and afternoons, we have eleven discontented animals (ten bovines, one horse) standing impatiently next to the feed boxes, waiting for us to get off our lazy duffs and give them food.  They bellow.  They moo.  They whinney.  They don't shut up until we feed them. 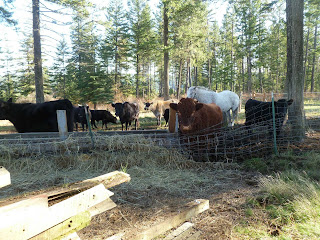 It's not as though there's three feet of snow on the ground.  There's still food in the woods if they look for it.  But it's so much easier, don'cha know, to gripe and moan and complain until they get their free food in the feed boxes.  Conditioned by the handouts, they are now too lazy to go look for food themselves in the woods.

But of course, the food isn't free.  My husband and I paid for it.  And we're the ones doing the labor of feeding.  Wind or rain or shine, we trundle the wheelbarrows over to the haybales, pitch the hay into the barrow, trundle it over to the feed boxes, and heave the hay into the boxes.  We fill the wheelbarrow three or four times each feeding.  We feed twice a day.  It doesn't matter what other chores need doing, or what the weather is like, or even how we feel.  And if we're late, they complain.

Until the snow flies and feeding becomes imperative, it finally dawned on me what the problem is. 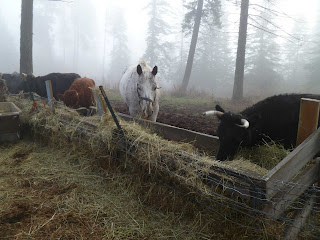 Our cows are on welfare.
Posted by Patrice Lewis at 2:44 PM