We're still getting in firewood for the winter.  Monday afternoon Don and I went back to the slash pile in order to pull out more logs and cut them up.

Unfortunately we've had a bit of rain since the last time we were there, and it was a lot more dicey to get down the steep skid road to the slash pile. 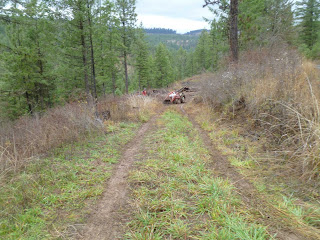 It also meant the landing where the tractor worked, pulling out logs, was a churned-up muddy pit. 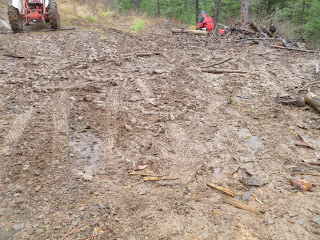 We pulled both the tractor and the truck down to the slash pile.  We unloaded the equipment we needed from the truck (chainsaw, crow bar, gasoline, etc.) then drove the truck back up to the road.  We didn't dare risk loading the truck with firewood lest it be unable to get back up. 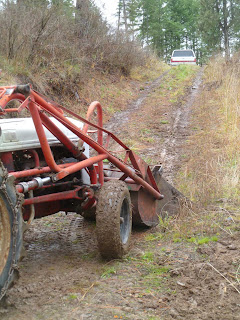 The skid road doesn't look like much of a problem in these photos, but I assure you it was. 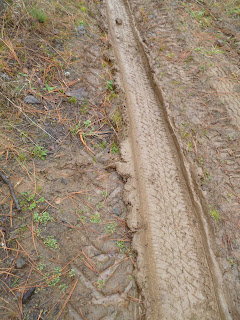 We yarded a bunch of logs but then had to stop because the tractor could no longer get any traction in the mud pit. 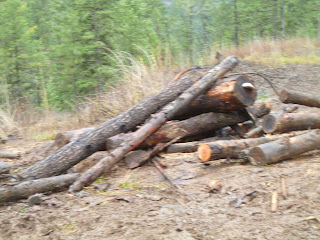 Then we realized we had a problem.  We could cut the wood up, yes, but then what?  How would we get the log pieces up to the road and loaded into the truck?  It was too muddy to bring the truck down, we didn't have enough chain to chain the logs and drag them up the skid road, and we couldn't load much in the tractor because frankly we weren't all too sure our two-wheel-drive tractor could even make it back up the road once, much less multiple times.  Arrrggghh!

So what we decided to do was cut the wood... 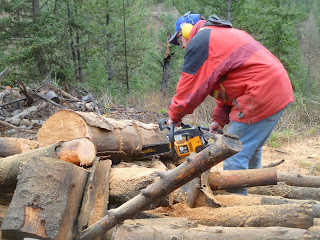 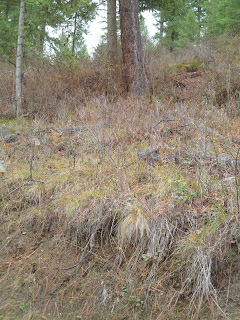 (One of the log pieces had this big thick fungus growing on it.  Okay mushroom experts, what's this one called?) 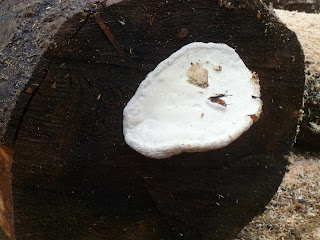 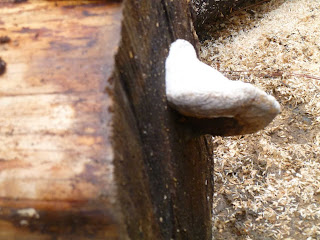 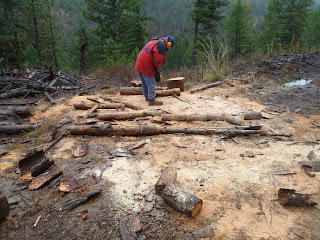 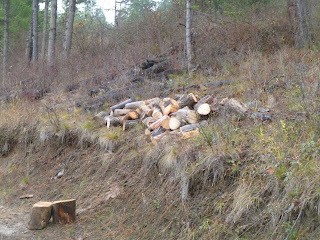 Then we had to stop because it was starting to rain pretty hard.  We knew a storm was coming in and had wanted to get some wood cut before the skid road got even muddier.

Well, storm it did.  The wind kicked up, and the rain poured, and it was miserable.  I shut Matilda and her calf Pearly into Matilda's stall (these two are lowest on the totem pole in the herd and would be pushed out of the barn otherwise) and we battened down hatches.  Around 9 pm our power went out - no surprise there - and we read by lamplight for awhile before all going to bed.  All night long the wind shrieked and moaned and whistled.

By morning the power was back on.  Don left early with our friend to bring back her wood cookstove.  An hour or so later, I looked out the window and realized that all the livestock - every single critter - was out in the driveway.  Grrr, how did that happen? 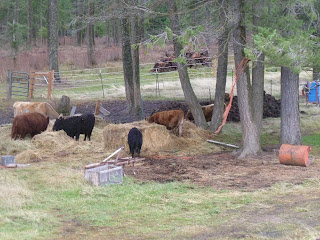 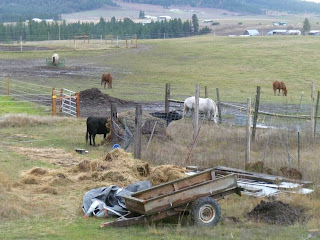 Turns out the wind was so strong, and it came on the heels of earlier rains which had softened the ground, that gateposts became loose and gates were getting pushed open.  I found three gates wide open, and our heavy metal driveway gate had blown closed.  I closed the gates and tied them, just to be safe. 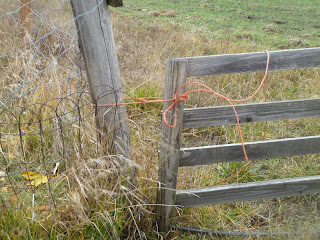 The girls and I tried to get the critters back to where they belonged, but they weren't cooperating and we didn't have a lot of time to mess with them (we were on our way out the door to go into the city).  With the driveway gate shut, there wasn't a whole lot of places they could go, so we left them munching on old hay bales and left.  The power went out just before leaving.

We were expecting UPS to pick up a package.  Since no one would be home - a rarity - I left a sign for the UPS driver.  We didn't want another repeat of last summer's open-gate experience. 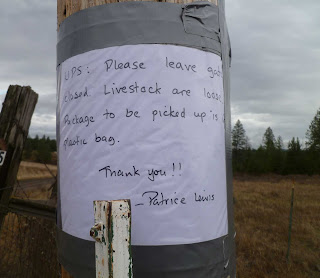 We hadn't realized just how bad this storm was.  Turns out our power was out because a line had come down nearby, and the poor hard-working electric company men were repairing it.  I stopped and spoke with them and they said the whole substation was out.  These poor guys had been up all night fixing lines, as you can imagine.  I wished I'd had some warm chocolate chip cookies to give them or something.  People like this are some of society's unsung heroes. 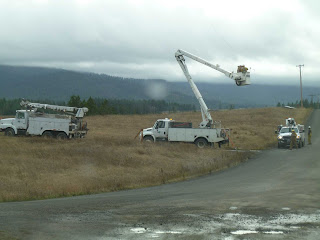 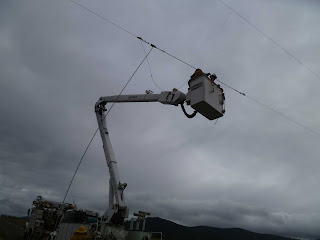 In addition to the usual blown-down trees and branches, we saw signage tossed around like paper. 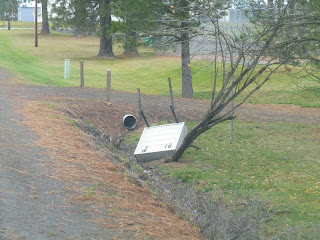 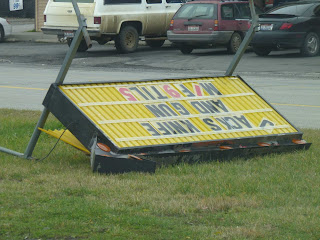 Apparently the strength of this storm caught a lot of people by surprise.  We live in a high-wind area, and wind is no big deal.  The fact that this one did as much damage as it did was unexpected. South of us, eleven power poles came down domino-style across the highway.  I don't know how high the wind got here, but down in Orofino it was clocked at 87 mph.  Yikes. 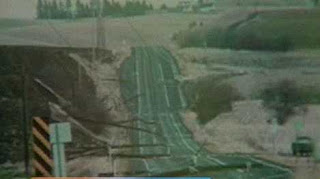 Posted by Patrice Lewis at 9:23 AM