Getting Polly ready to milk

For the last couple of years, I've felt sorta like we've been "cheating" here on our homestead. The reason is, we're not producing our own dairy products. Hopefully all that will change soon.

Matilda, my beloved Jersey that we got from a commercial dairy a few years ago, had an unusual situation with her last calving: one of her teats had the cartilage collapse and it inverted. She had already lost a teat shortly after we brought her home, due to a horrible case of mastitis. So Matilda is down to two working quarters, and I gave up milking her. Instead I let her devote all her milk to her calf (when she has one -- she's due to calve in September).

Knowing that Matilda was down as a milker, and wanting another Jersey for a milk animal, we bought Polly two years ago. Polly is a sweet little purebred heifer and we've been eagerly waiting for her to grow up so she could be bred. 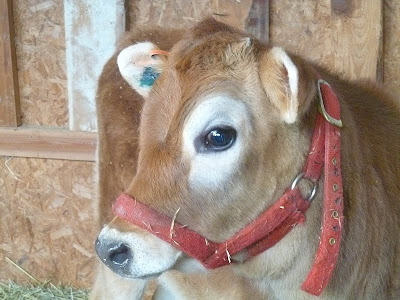 Well Polly's all grown up now, and has been our bull Samson's pen mate since we got him. 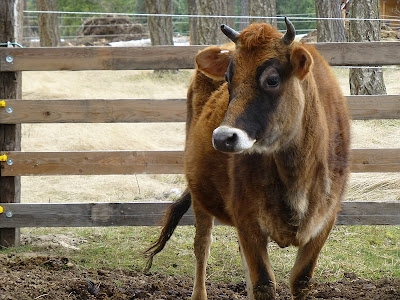 At first we thought Polly would be bred by Samson, since she's been in the pen with him since December. However in the last few weeks her udder has been bagging up, and it's become apparent she was bred by our bull calf Atlas, whom we butchered last month. This means she's probably due to calve in the next few weeks. 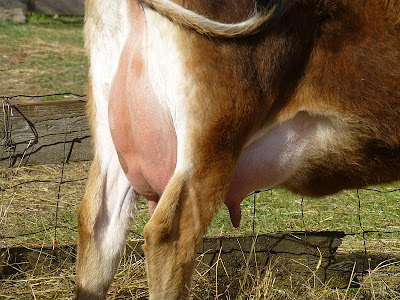 Polly is going to be my primary milker once she calves, and I wanted to make sure her transition from carefree heifer to responsible milk cow goes smoothly. To this end, I needed to work with her: brushing, lead-walking, handling her udder, getting her used to the milking stall, etc. It was hard to do anything while she was in with Samson, so it had been awhile since she'd been handled.

Bottom line, we needed to get Polly out of Samson's pen. This meant putting a halter on her, first of all. 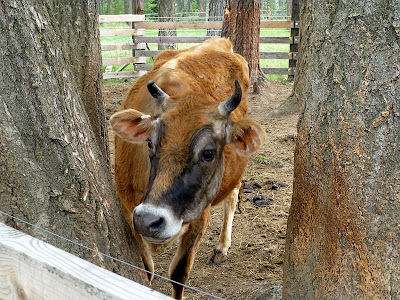 We let her out into the enclosed area next to the barn and put a rope around her neck. But she didn't want a halter on. No sirree! And those horns were intimidating. Nonetheless we tried two or three halters until we found one that fit. We buckled it on incorrectly but it was the best we could do while she was tossing her head around and trying to get access to the green grass. Finally we let her loose to graze for a few minutes.

(You'll notice I don't have any photos of these proceedings. That's because I was, um, occupied.)

Anyway, all this commotion attracted the attention of the other critters loose in the driveway area, so they came over to investigate. We had been wondering who to put in with Samson since it's not good for any bovine critter to be alone. We decided Shadow would be a good candidate. She's the one who lost her calf a few weeks ago. She's already been through one heat cycle since her calf died, and Samson would enjoy having such a pretty young thing in his pen. So in she went. 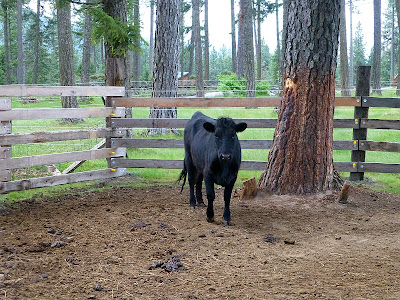 Despite the badly-put-on halter, we put a lead rope on Polly and walked her with surprising ease into the corral. Whoo-hoo, she hasn't forgotten her early lead-training!

Once in the corral with all our other new mamas, Polly instantly embarked in dominance fights. Cows have a pecking order, after all. Don and I stayed close by to make sure things didn't get out of hand or no calves were in danger of getting trampled. 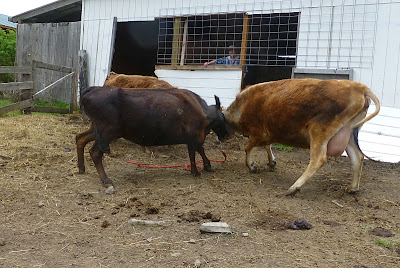 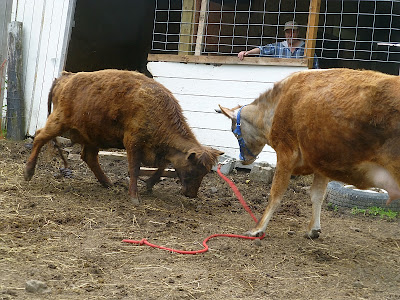 These tussles lasted about one minute, tops, and then all was peaceful again. Polly gently introduced herself to the calves without an issue... 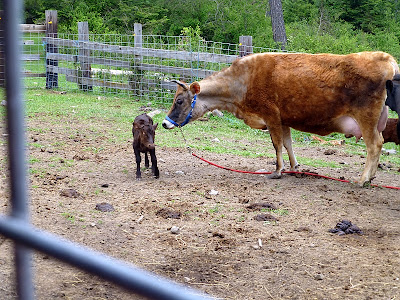 ...and then settled in to become reacquainted with the other ladies. 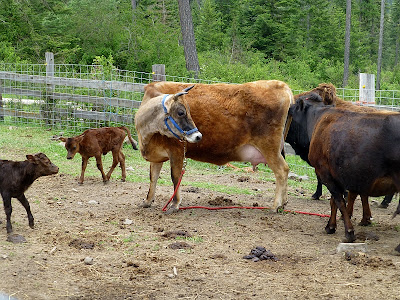 Now that I didn't have to watch my back (literally) with a bull in the pen, I've been spending a lot of time with Polly, getting her used to being handled. Out came the brush. 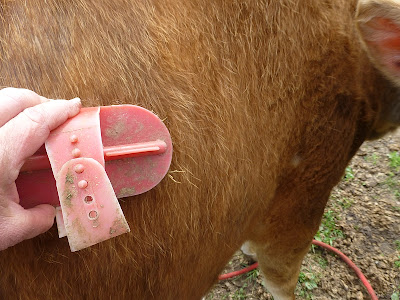 Oh my, does Polly adore being brushed. Her head droops, her eyes half-close, as she sucks up the attention. I brush her all over, and handle her udder and teats and legs. No problems, she doesn't flinch or kick or anything else, except bask in the position of being Princess Polly once more. 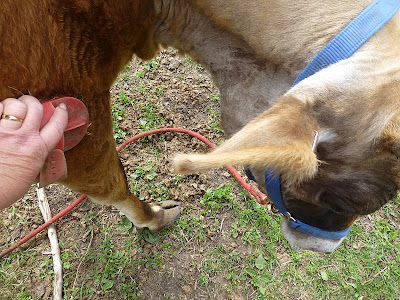 Best of all, she was calm as can be when I removed her halter and readjusted it, then buckled it back on. I also removed her lead line since she has no problem with me leashing her up.

Our next step is to clean out Matilda's old milking stall and get her used to going in and out. Getting closer to milking, yee ha!
Posted by Patrice Lewis at 9:04 AM