Up to this point, the livestock have been confined to the wooded side of our property. This is where they stay for the winter (it's accessible from the barn for easy feeding), but as spring has emerged along with green grass -- which means we're feeding less --the critters have been eating down the grass in the woods pretty rapidly.

Before putting them in the pasture for the summer, we decided to let the livestock loose in the driveway area in order to crop down the grass (less work for us -- we don't have to mow or weedwack). They could also eat down the triangle pasture where we had grown wheat last summer. It's fallow this year, so keeping it trimmed would be nice.

Before letting everyone loose, however, we needed to cordon off the garden, the barn, and the end of the triangle pasture (where the fence is down). Out came the wonderful trusty cattle panels, moved from one spot to another (in this case, reinforcing the fence near the bull pen). 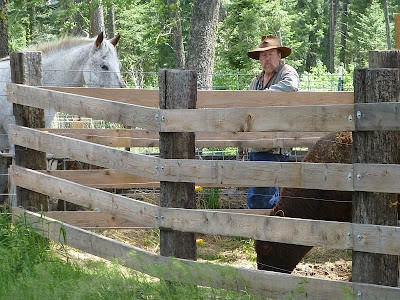 Here's the tip of the triangle pasture, now fenced off. 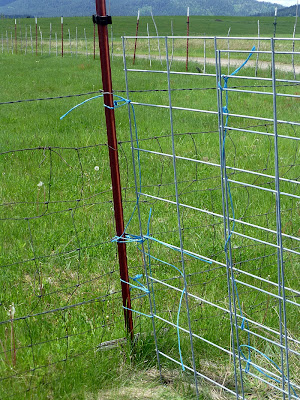 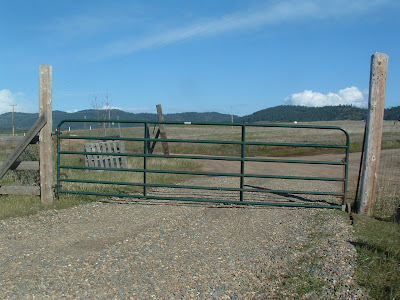 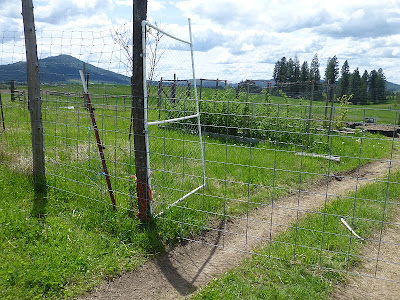 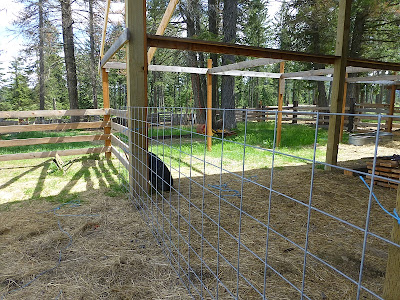 Then we opened up the gates from the wooded side, and let the animals roam. 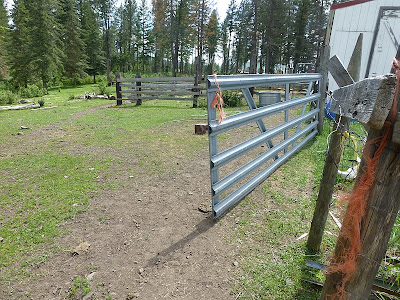 Brit, of course, was the first one through, cropping the fresh green grass as she went. 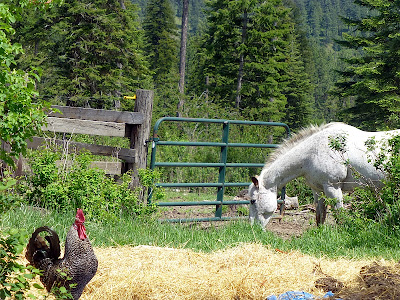 But she was under the mistaken impression that she was being allowed into the pasture. Nope. 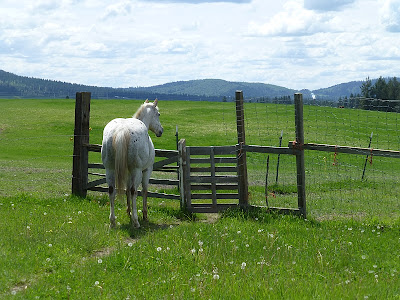 Same with the other critters. Nope. 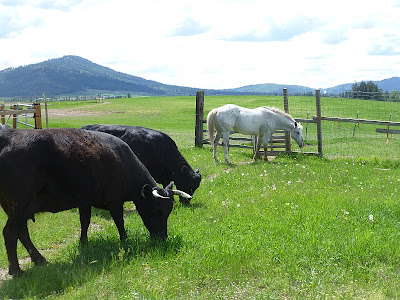 But that's okay -- lots of yummy fresh grass on this side. 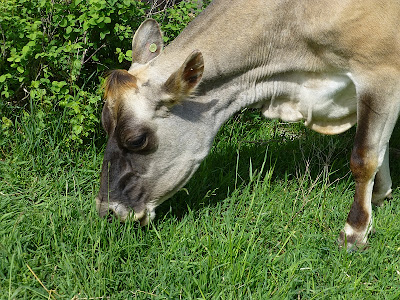 What is it about dirt piles that makes animals want to rub in it? 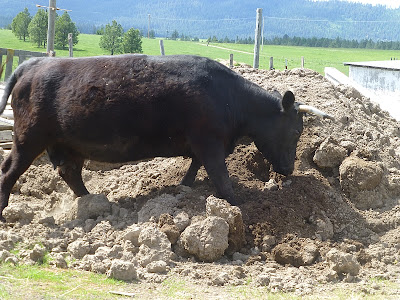 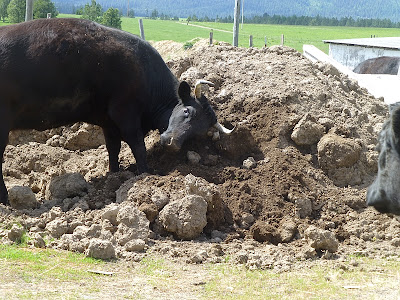 Cow kisses between Raven and her daughter Shadow. 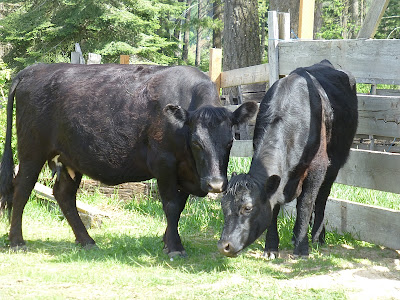 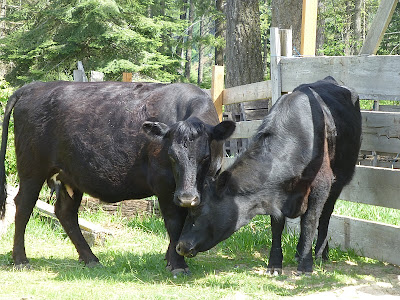 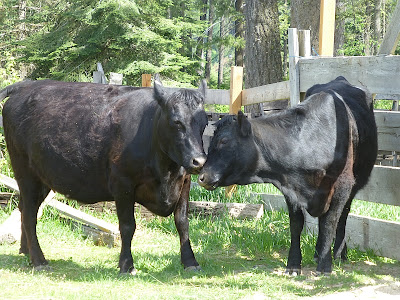 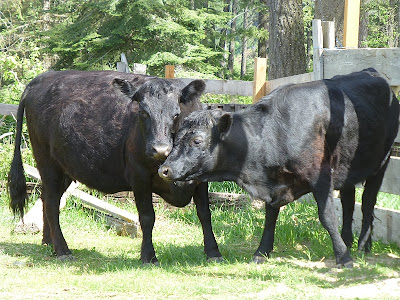 Early the next morning, the animals discovered the triangle pasture. 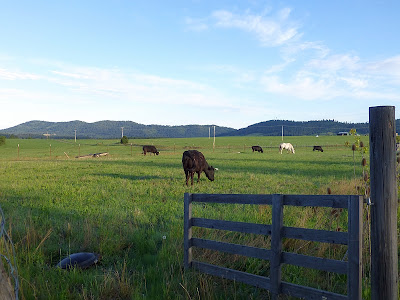 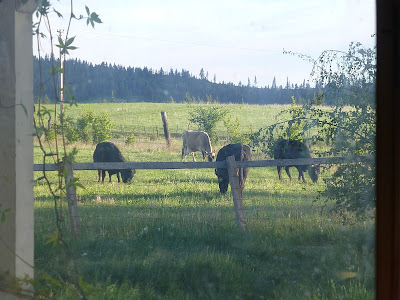 This drove the dogs nuts since the pasture is right next to the yard. 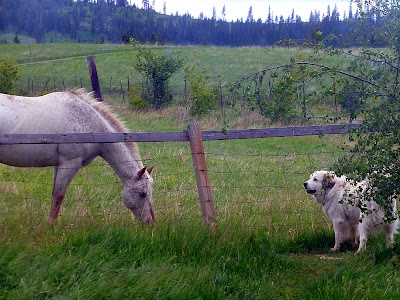 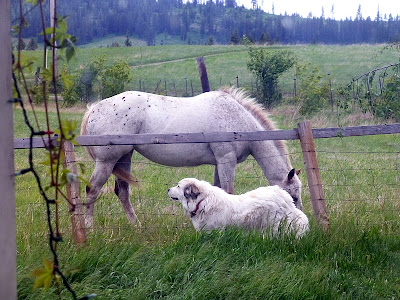 This morning Ruby met Leto through the gate. Very cute. 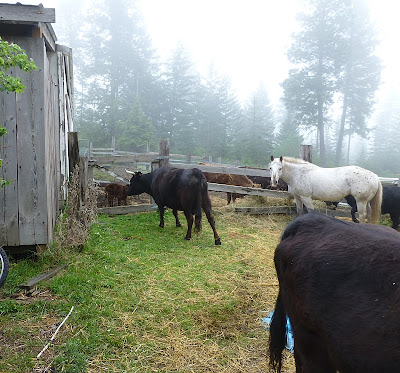 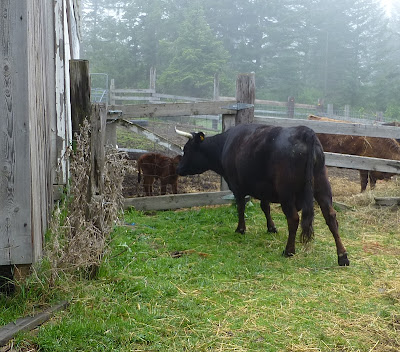 We'll keep the critters in the driveway area for about another week or so, before releasing them into the pasture. For that amount of time we'll have to watch our step for all the "landmines" in our way!
Posted by Patrice Lewis at 9:44 AM