Amazing what kids can do

I am continuously delighted by my girls. It's amazing what they can do when they put their minds to it.

As a Venture Scouts project, Younger Daughter was required to pull together a meeting that reflected a hobby. She decided to put on a writer's workshop since she has a passionate interest in writing.

All by herself she contacted the Idaho Writer's League and presented her idea, and asked if anyone was willing to donate their time to this project. The IWL chapter president kindly passed this request on to the members, and Younger Daughter was blitzed with offers from writers generously willing to participate by giving a workshop.

She contacted the Coeur d'Alene public library about a meeting room, set a date, signed the required contracts (which I co-signed since she's a minor) and even paid the cleaning fee out of her own pocket, as was required by contract since she offered refreshments. The library's meeting room is only available for four hours on Saturdays, so Younger Daughter had to limit the number of workshop to three. In order to present as broad a spectrum of subjects as possible, she selected three writers (myself included) to give seminars on freelance writing, self-publishing, and fiction writing.

She kept in touch with her speakers and, as the day grew closer, she pulled together an advertisement (which I mocked up for her). She then sent this to local colleges, vocational schools, high schools, coffee shops, and placed the information in the Coeur d'Alene Press. 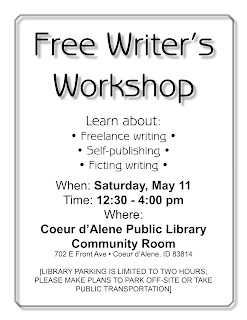 Attendance was modest (five people), but all five people were eager to learn, attentive to the speakers, full of excellent questions, and went home very very satisfied. 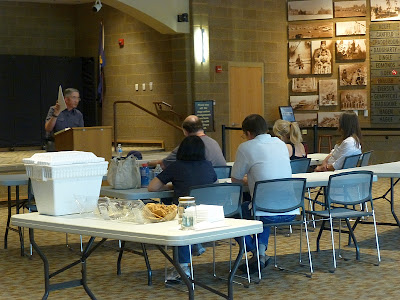 Younger Daughter welcomed the attendees to the workshop, introduced each speaker, thanked both the attendees and the speakers afterward, and followed up with thank-you notes to those who had helped her out.

This project was on par with Older Daughter's Venture Scouts project last November, which was to put on a music recital in a nursing care facility.

I'm so proud of my girls for having the gumption to pull together these kinds of activities.
Posted by Patrice Lewis at 7:28 AM