Bellows from the barn

I woke up about 2:50 am this morning and heard bellowing in the barn. "Sounds like a cow's in labor," I said.

"How do you know?" Don mumbled sleepily.

I got up and got dressed. More bellowing came from the barn.

The two heifers who have been tucked in the corral for the last week are first-time moms (by definition a "heifer" is a female cow who hasn't yet given birth; presumably her status changes into "cow" the moment the calf drops) and I wanted them close just in case they had any difficulties birthing or nurturing their babies.

The night was fairly mild (40F) but very foggy. By the time I stumbled into the corral with a flashlight at 3 am, I saw that Victoria had already dropped her baby and was vigorously licking it. I tried to take photos, but the camera flash only picked up the misty fog and made it look like snow. 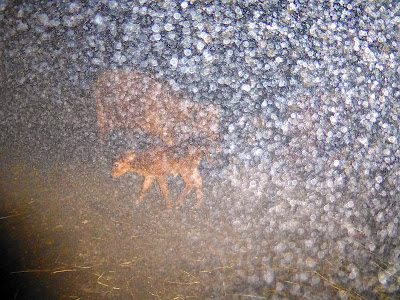 I stayed in the corral for quite awhile and watched by flashlight. For a long time Victoria danced around her calf in some befuddlement, bellowing and licking, bellowing and licking. Her back was still hunched, and I wanted to make sure she wasn't having twins. But as the night waned and dawn crept in, it was clear her discomfort stemmed from the fact that the placenta hadn't dropped.

The calf (a little girl) stumbled to her feet and began searching for the udder, but Victoria kept dancing away, not quite sure what this strange creature wanted. But 5 am when it got light enough to take photos, Victoria was sorta kinda getting the hang of it. At least she allowed the baby to get some life-nourishing colostrum in her. 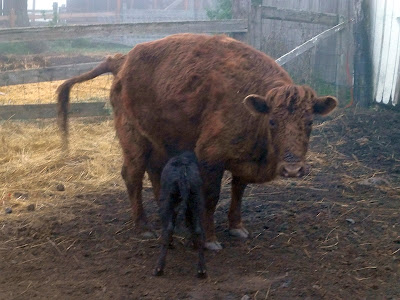 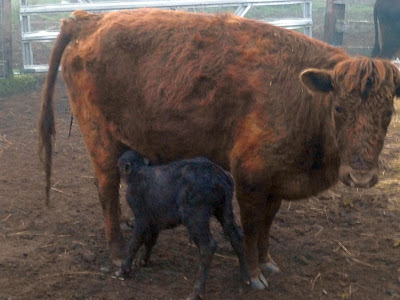 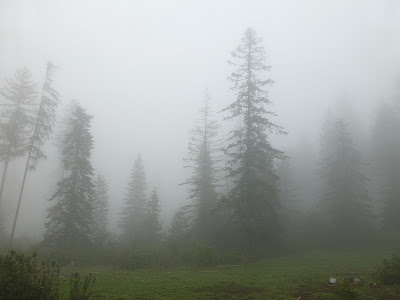 Victoria was still uncomfortable because of the placenta, but she calmed down enough to let this strange little creature that came out of her, nurse. First-time cows are pretty funny -- you can almost hear them say, "What IS this thing?" when this little calf stumbles toward them searching for the udder. 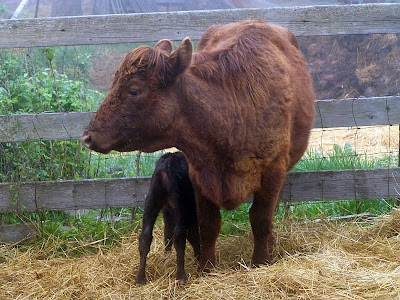 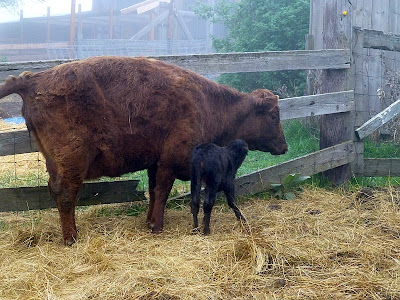 But the calf is strong and a healthy nurser. 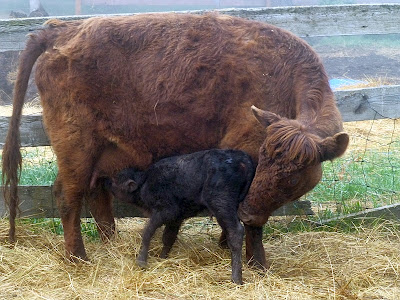 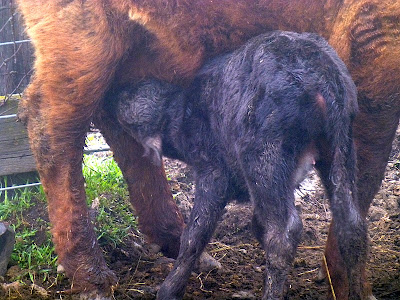 She's a pretty little thing with rosy rings around her eyes. 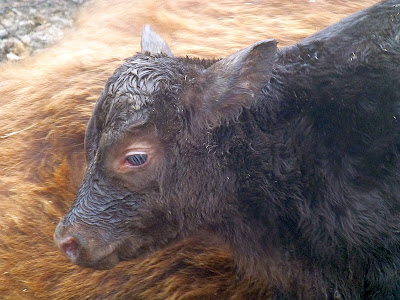 By 6 am, Victoria lay down, exhausted. She still hadn't passed the placenta. 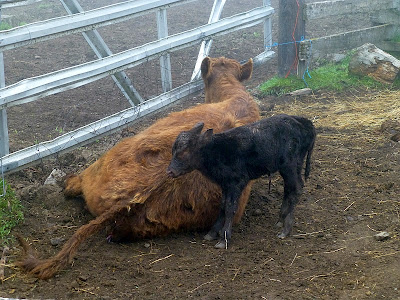 Unable to stay still for long, she was soon on her feet. Despite her cramps and contractions, she allowed the calf to nurse. 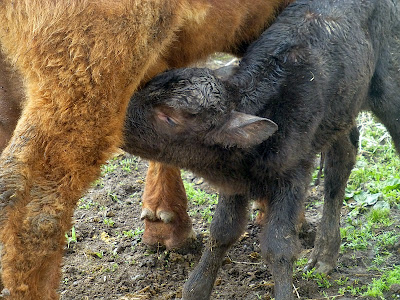 At 6:50 am, I just happened to be photographing the calf when Victoria hunched once again and strained. I was pleased to see the placenta make its way out at last. 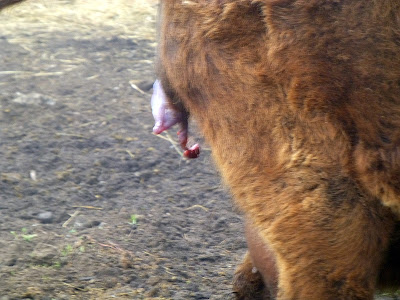 Rather ugly, ain't it? 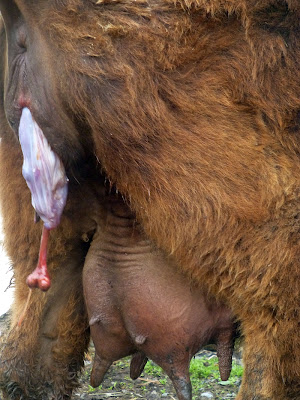 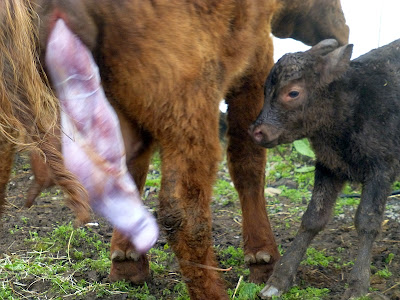 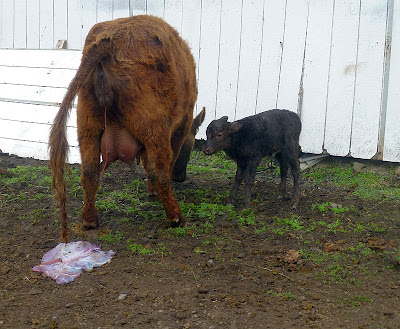 After this, Victoria perked right up and got down to the serious business of learning to mother. She's doing very well. 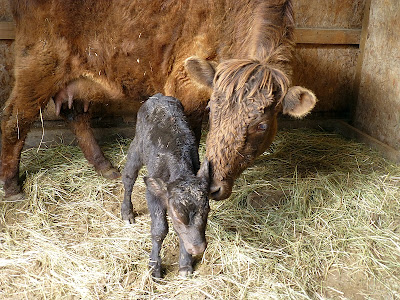 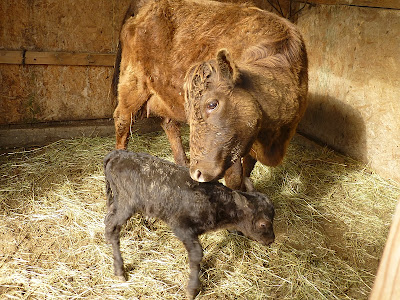 Because of the rosy rings around the calf's eyes, we decided to call her Rosy. 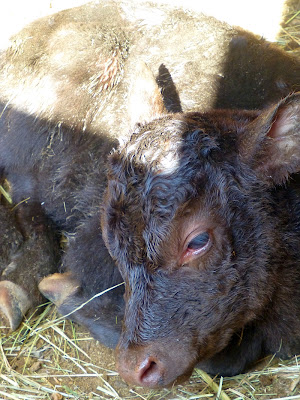 Little Rosy is just the second out of eight calves we're expecting this season. Calves for sale in a year! 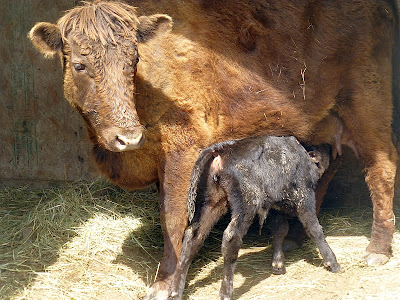