Oodles and oodles of strawberries

Last year, unsurprisingly, I gave up on my beautiful strawberry beds after the deer absolutely decimated them. And I mean decimated. Plants were ripped up by the roots, still-rooted plants were eaten down to nubbins... No matter how much bird netting I draped over them, and no matter how cleverly or securely the netting was draped, the deer found their way in. They were aggressive in their hunt for my precious strawberries. By the end of the season, my strawberry beds were so destroyed that I figured nothing was salvageable. I didn't even bother to mulch the beds with straw before winter.

Fast forward to early spring. The beds still looked stripped and bare, but much to my surprise, some of the plants had survived both the winter and the deer. 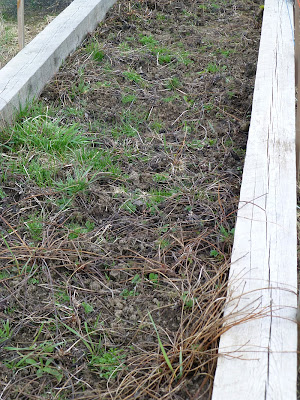 So in early April I did some weeding and tried to assess what was still alive. My goodness some of the weeds had long roots. 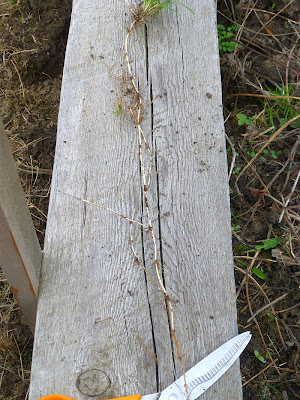 A lot of the strawberry plants were dried and crunchy and thoroughly dead. 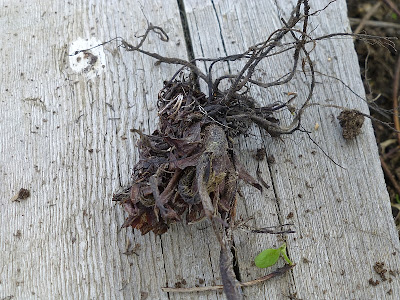 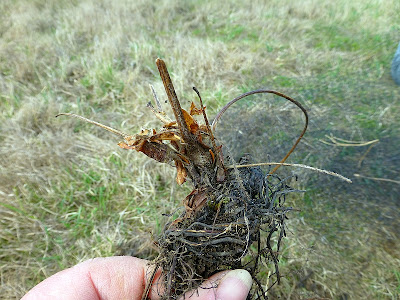 Or were they? I had to look them over very carefully to make sure. 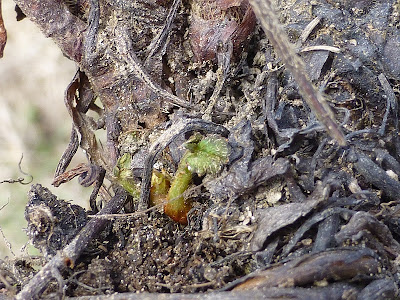 Nonetheless, despite more strawberries surviving than I thought, my beds were sadly depleted. So in a moment of giddy exuberance (this was before Don got sick and we had to watch our spending), I ordered three hundred bareroot strawberry plants from Miller Nurseries.

These were shipped in early May. 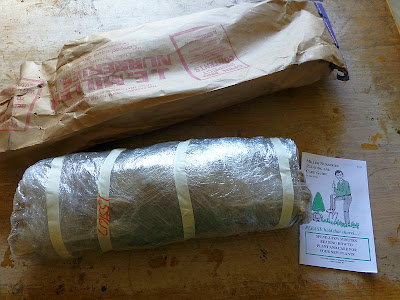 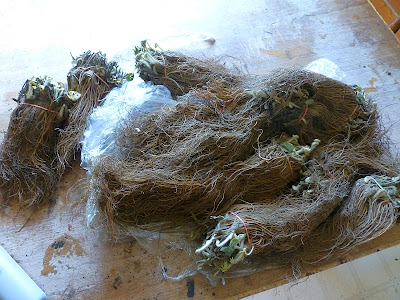 I guess I didn't realize just how many three hundred really is. While I knew I wanted some extra strawberry beds, now that the plants were here I had to figure out where to put them. I decided to use larger tractor tires (split in half) for strawberry beds.

So I heaved our truck over the hills into Washington to a place that changes tractor tires for farmers. They loaded two tires into the truck for me. These tire centers are always glad to get rid of tractor tires, because it costs a lot of money for them to recycle them. 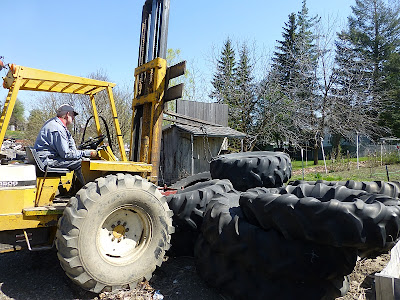 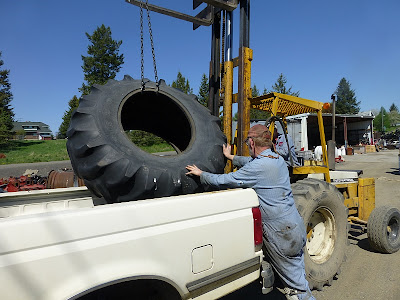 Two tires were all they could fit into the truck, and frankly I was pretty nervous driving home because of the weight (the tires are about 500 lbs each). I kept expecting the truck to tip over, so I crawled home at low speeds. Good thing the route isn't busy. 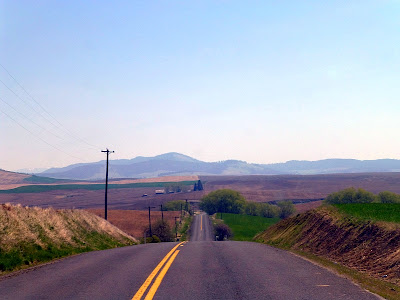 But it gave me an idea. If these guys have to PAY to have the old tractor tires recycled, would they consider loading up a bunch and delivering them to our place for FREE? I'm strongly of the philosophy that It Never Hurts to Ask, so I did.

The response was almost comical. You want tires? Really? How many? When? Can you take them this afternoon?

Next thing we knew, a fellow named Jason had loaded up twelve tires onto a flatbed truck and was on his way to our place. It was satisfactory for both parties: he got to "recycle" his tires for just the cost of delivery, and we got twelve enormous tires for free, delivered straight to our door. 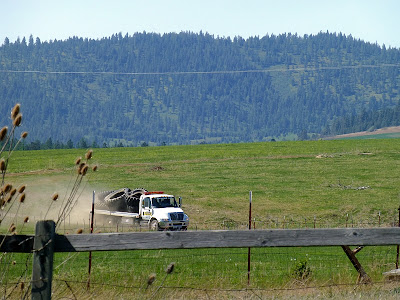 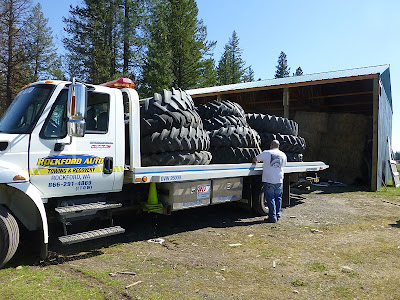 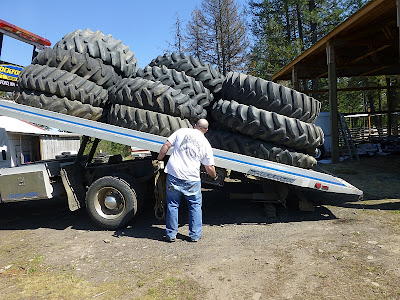 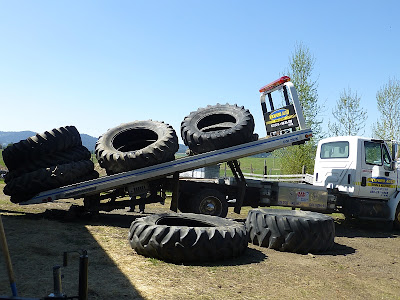 Now that we have a free source for these monstrous things, there are a lot of possibilities for their uses. Besides raised beds in the garden, some larger uncut tires would work for fruit tree planters. Tires with just the sidewalls cut out would work for cattle feeders and potato beds. Jason said he would hold for us some enormously wide (3 feet deep or so) tractor tires from a rig he's changing next week. 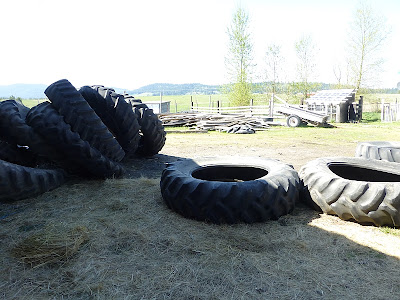 We also have neighbors who are thinking about raised beds in tractor tires. Bottom line, Jason could get rid of a lot of tires through us!

Over the next couple of days, whenever we had a few minutes to spare, Don and I would slice a tire or two in half length-wise. When we had a bunch cut up, we borrowed the tractor, chained them up, and moved them into the garden. 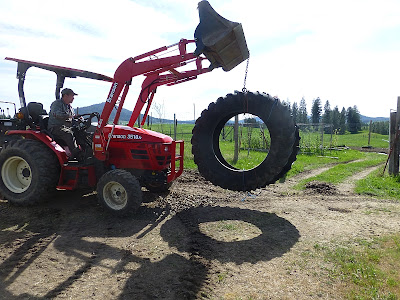 It took us a solid day's work to move all the tire halves and fill them with compost and dirt, but finally the beds were ready to plant with strawberries. With ten new beds, we're, um, gonna have a lotta berries. 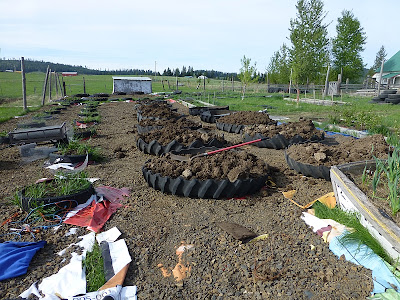 But first the strawberries have to be planted. I took them out of their packaging and soaked the roots for a few hours. 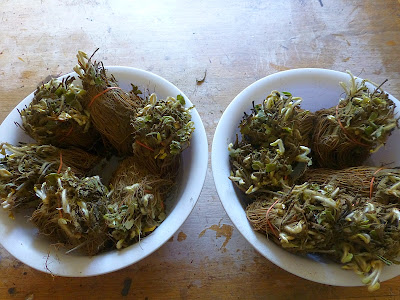 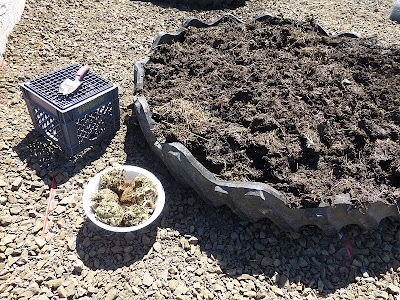 I laid out the strawberries first. I found I could fit about 30 strawberries per tire, so my estimate of ten tire halves was spot-on. 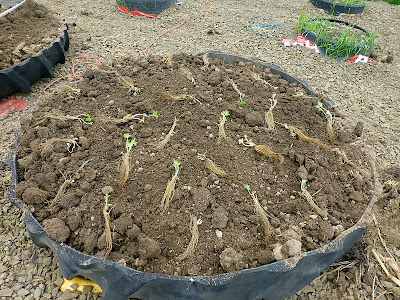 Before planting, I trimmed the roots of each plant to about four inches in length. After many hours, I got all 300 plants in the ground. 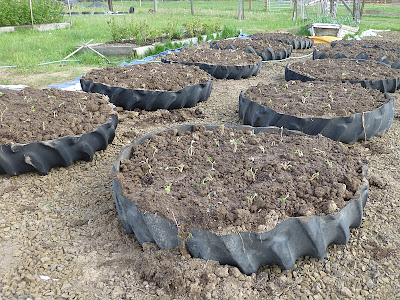 Oh and by the way, we're putting in nuclear fencing this summer. No deer allowed. 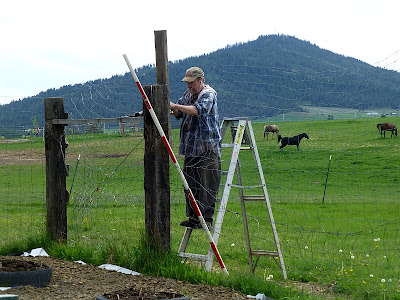 Posted by Patrice Lewis at 4:32 PM