The blessings of large families

When I was growing up with my three brothers, our family of four kids was considered a bit unusual because it was so "large." Most people had three or fewer kids in their families.

But now we live in an area where many people, for a variety of reasons, have very large families. Six, seven, eight, even ten or eleven kids isn't unusual. Since we have "just" two children, we're once again considered a bit unusual.

Last night we had some friends over for dinner. These folks have five children ranging in age from three to thirteen, and the wife has a baby due one month from today (I can't wait to cuddle a newborn!). We had an absolutely delightful time.

Before our guests came over, we pulled down all the toys the girls played with when they were younger. Blocks, trains, Hotwheels, dolls, Legos... the boxes of toys were poised and waiting for the onslaught of activity. 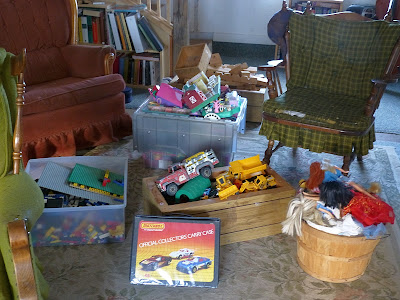 It didn't take long for the younger kids to unpack everything and set up their imaginary worlds. While the adults visited, the kids were thoroughly occupied. And I mean thoroughly -- we hardly heard a peep from them for hours. 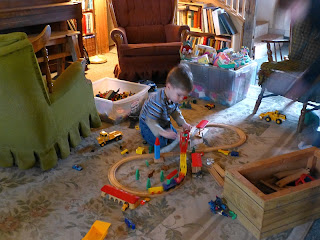 This old truck -- dating from my childhood -- was a particular favorite. They don't make toys like they used to. 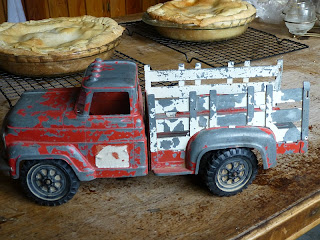 The nice thing about large families is by the time the sixth or seventh or eighth kid comes along, the parents are usually experts on childraising. They no longer have to figure things out as they go along, as Don and I did. They know it all already. They know how to keep calm, to keep order, when to be lenient and when to be strict. Our friends (Jack and Natalie) are the epitome of excellent parents for large families: calm, patient, strict, disciplined... did I already say calm?

And large families, almost to a T, consist of wonderful kids. I don't believe I've ever met a child from a large family who was rude or inconsiderate or disrespectful or spoiled. With so many people in one house, children grow up learning to share, minimize squabbles, help each other, and otherwise get along. 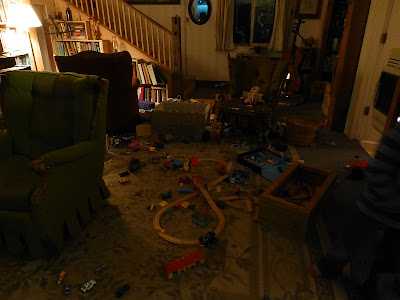 That's why it was so much fun having all these kids over last night. For a few hours, our home was a place of happy chaos. Kids everywhere, playing with toys that hadn't been played with for a long time. And at the end of the evening, all the children pitched in and re-boxed all the toys and left our living room tidy and ordered.

Don and I are getting closer to that time of life when our children are thinking about leaving the nest. Older Daughter will be departing for nanny school in about two years. Younger Daughter is 14 and fast approaching young adulthood. Our days of tiny children being constantly underfoot are over, until we're blessed with grandchildren.

It's a pity, in a way. And that's why we like having large families come and visit.
Posted by Patrice Lewis at 3:09 PM