A reader named Kymber sent me a fascinating article from the UK Daily Mail on how one fifth of British children suffer from 'school phobia' but half of parents are unaware of the problem.

Here are the highlights:

• Children aged five to six and 10 to 11 most likely to suffer from the condition
• Results in children not wanting to attend school due to emotional distress
• Sufferers often fake illnesses on school mornings or suffer genuine stress
• Being bullied was the most common trigger of the phobia, claim parents

It's well-known that stress affects a child's ability to learn, so stress from whatever causes (whether it's bullying, family problems, physical appearance, school size) will impair academic advancement.

I doubt the problem is any better in the U.S. I clearly remember hating junior high school (as it was called at the time) due to the teasing and harassment I got. Things were better in high school because I became friends with the librarians and they used to let me work the counter as well as hide out in the librarian's workroom during my lunch hour. I knew I didn't have things too badly -- bullying wasn't tolerated then as it is today -- but the unpleasant memories still linger. 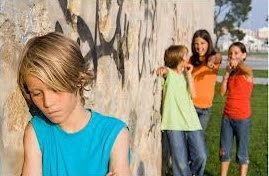 It's impossible to eliminate bullying or other school stresses. They're just part of the school culture. What's the solution, besides removing the child from school? I have no idea.

I just feel sorry for these poor children who must stress their childhoods away.
Posted by Patrice Lewis at 7:59 AM