Here's an interesting article which caught my eye this evening.

It seems a young German couple couple is managing to live without money. "A Berlin family of three has been living on practically nothing but love and the goodwill of others for more than two years and counting," says the article, "not as a victims of the rough economy, but as activists who are on a money strike to protest what they call our 'excess-consumption society.'" 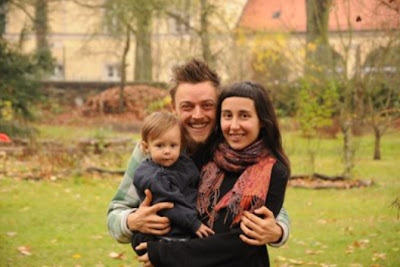 I thought, "My goodness, how lofty and resourceful they must be." However upon further reading, it seems this "resourcefulness" largely depends "on the goodwill and excess resources of others."

In other words, mooching.

The profile of this couple blows hot and cold. On one hand, I certainly can't argue with many of their philosophic points about how wasteful, materialistic, and over-consumptive western society is. I have shelves full of books arguing that very point. And they are unquestionably doing odd jobs and freelance work to "pay" for living spaces and doctor bills. There's a certain attraction about being so free-spirited and unencumbered in a world where most people are laden down with possessions. And it's not like they're forcing anyone to barter with them or share their "excess resources" (except, arguably, government resources).

But at what point does this free-spirited lifestyle descend into mooching? How convenient that Germany offers "universal medical care" (paid for by...whom?) as well as "child support" received from the government (which, the article hastily adds, is "granted to all children" -- paid for by...whom?).

As one commenter posted at the end of the article, "This guy reminds me of someone who's trying to quit smoking - they still smoke, only they smoke other peoples cigarettes."

Am I misjudging these folks? Are they being truly resourceful or merely freeloading? Where's the dividing line?
Posted by Patrice Lewis at 6:33 PM