For ladies -- the beauty of a bra holster

This is my revolver. 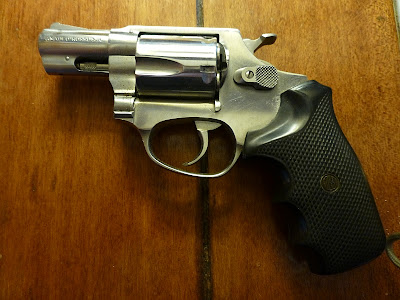 It's a sweet little Rossi .38 which I've had for, oh, about fourteen years now. We bought it after I got my concealed carry permit back when we lived in Oregon. I wanted something good-quality but small, something I could slip inside my purse.

It's biggest drawback is its weight -- nearly two pounds. 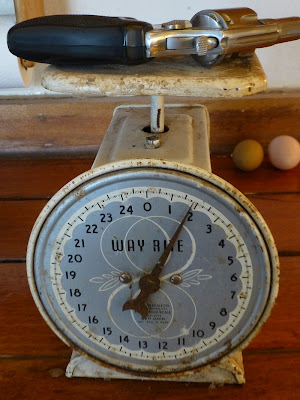 After we moved to Idaho, naturally I got my concealed carry permit for here as well. 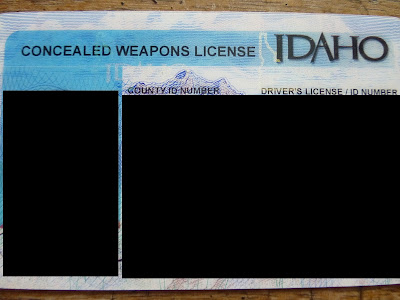 So here I have a nice purse-sized revolver, and my concealed carry permit. So what's the problem? The problem is how to carry, concealed.

Women have a lot of problems with concealed carry because there's hardly any place on our person to hide a weapon. Waistband holsters are immediately apparent on a woman (and I live eternally in sweatpants anyway, which doesn't have a sturdy waistband). Purses can either be made for, or adapted to, carrying a firearm, but it makes for a heavy purse...and purses can be stolen.

For a few years I solved the concealed carry issue by wearing a wrap-around-the-waist Neoprene holster which secured my revolver in the small of my back. It worked fairly well -- it was virtually invisible underneath a shirt -- but it had its drawbacks. I couldn't drive while wearing it, nor could I wear a backpack. Plus the Velcro band holding the revolver in the holster started to lose its "grip" over time, resulting in a loose firearm.

I thought about getting a Flashbang Bra Holster. However this consists of a specialized strap fastened to one's bra. 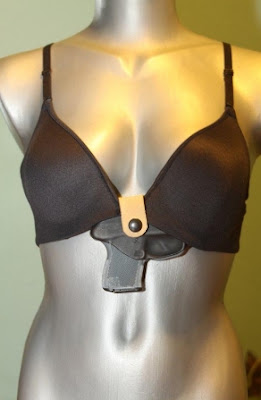 Frankly I'd need a nuclear bra to hold my two-pound Rossi. Plus I've read reviews on this type of holster that indicated the concealed firearm jostles and dangles too much, and its outline is apparent under certain conditions. For me, this wasn't an acceptable option.

So for a long time I simply didn't carry my revolver. Until recently.

A few years ago a friend started a cottage business making bra holsters. She calls her business Naturally Concealed.

"Bra holster" is something of a misnomer because the holster is a separate garment, not part of the bra. But what it does is nestle the firearm against the bust. The handle fits between one's cleavage (incidentally giving a bit of "lift" into the bargain, if you get my drift) while the body of the firearm is held securely under the bust. 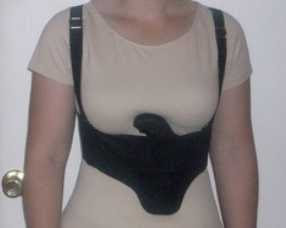 The means the holster is virtually invisible under most garments. 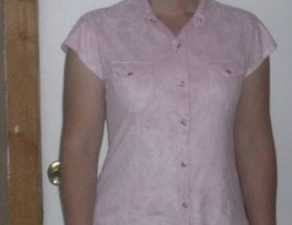 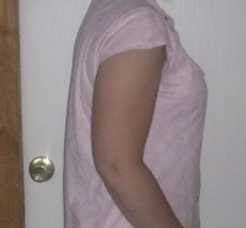 The holsters are custom-made according to a woman's measurements, the type and caliber of firearm, and whether you draw right- or left-handed (I'm a leftie).

I've coveted one of these ever since my friend started her business. In fact, I ordered one almost two years ago -- and never got around to picking it up or paying for it until recently. So for the last couple of months, I've finally had a chance to try this gizmo out.

And oh my. I became an instant convert.

Here's my holster. The "dip" is where the barrel of the gun fits. This side faces outward. The fabric is thick and smooth, erasing any outline of the firearm under a shirt. 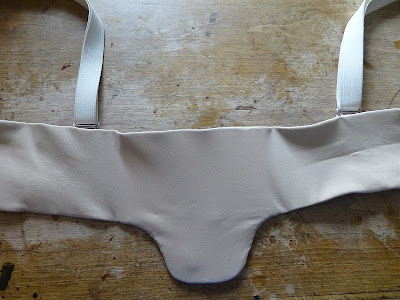 On the side facing my skin is the pouch (the revolver actually fits further down into the pouch than is shown). When worn, the exposed grip nestles into my cleavage, rendering it invisible under all but the tightest shirts (and I don't wear tight shirts). 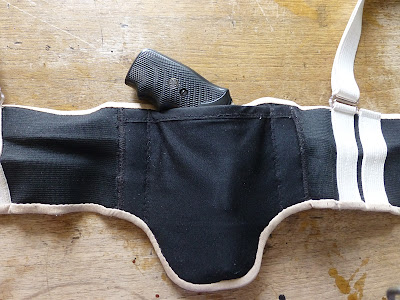 The strap even has some sewn-in slots for additional ammo. 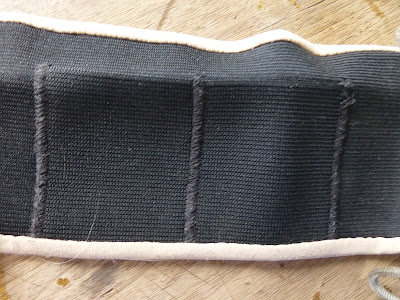 On the first day, I wore my revolver (empty) around the house and barn, doing ordinary things, just to get used to wearing it. I even drove into town to see how it feels driving (no problem!). I was astonished at how comfortable it is. My two-pound Rossi, which is normally pretty durn heavy when carried in my purse, feels feather-light while strapped to my chest.

I've taken to wearing my gun whenever I leave home (as long as I stay in Idaho, of course). No one is the wiser. I've even hugged friends and they don't suspect I'm carrying concealed. The only movement restriction I've found is I can't lean into something because I'll be leaning into the firearm.

In short, ladies, I can't recommend this holster highly enough. It fits both small- and large-framed women with the utmost discretion. In these lawless times, carrying a firearm is one of the smartest things you can do. Here's a way to do it while still dressing like a lady.

UPDATE: As of 4/19/14, Naturally Concealed has closed its doors for business due to too many outside commitments and projects. What a pity.
Posted by Patrice Lewis at 8:36 PM