Every year our neighbor who owns the 20-acre parcel adjacent to us allows us to run our cattle on his land in late summer. The beasties have pretty much eaten down both the woods and the pasture on our side of the fence, so it was time to give them fresh grass.

But first we had to walk his property lines and check the fences. 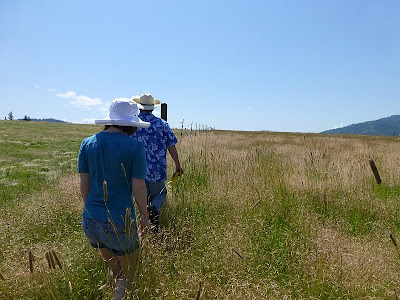 We saw lots of spots where deer bed down for the night. 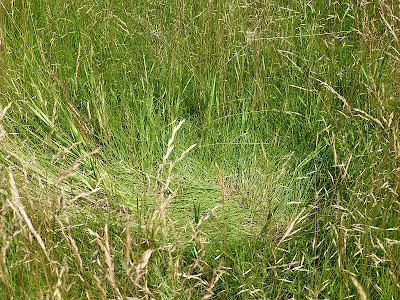 Long stretches of fence have been pushed down by the neighbor's horses, reaching for the taller grass on the other side (which, as everyone knows, is always greener). We'll run a high-tension wire and patch these areas. 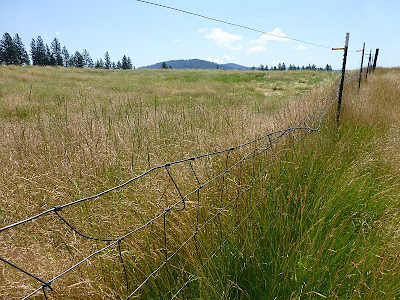 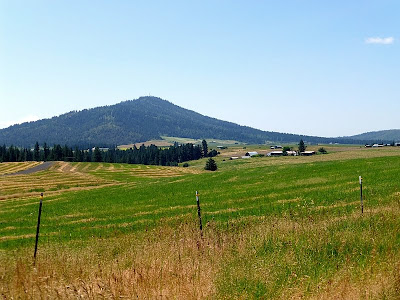 This parcel has a pond, so the livestock will have water. 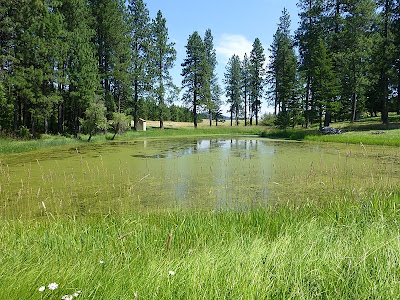 Checking for tadpoles. (Too late in the season -- they're all little frogs by now.) 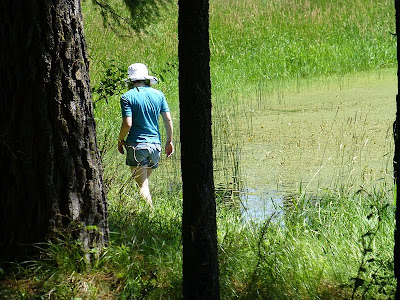 We exited through a gate on the adjacent side of the property, onto the road. 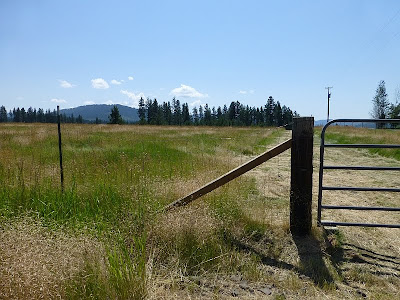 The critters in the distance have no idea they're about to be released into greener pastures. 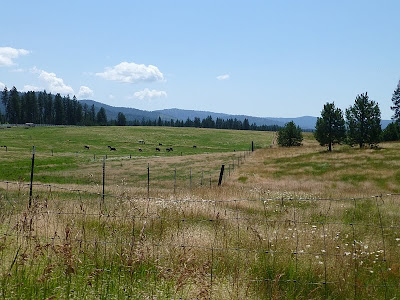 So when we were ready to let the cows onto the neighbor's land, I started walking toward the adjoining gate and yelled "Bossy bossy bossy bossy bossy!" -- which is our general "herd call." (Named after our first cow we had in Oregon.) 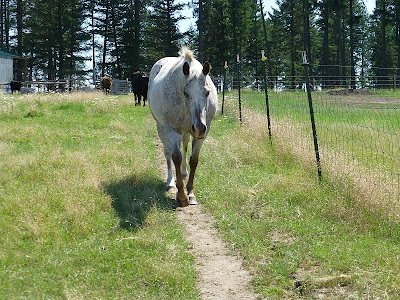 Most of the older animals know what was up, and fell in line right away. 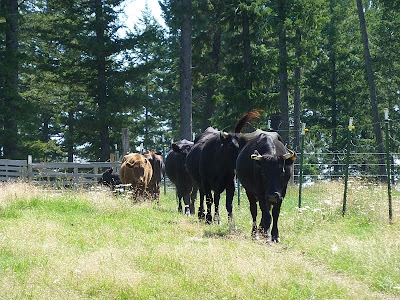 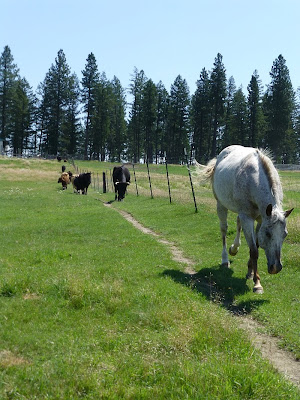 In fact, they came so quickly they got ahead of me. "C'mon! Open the gate already!" 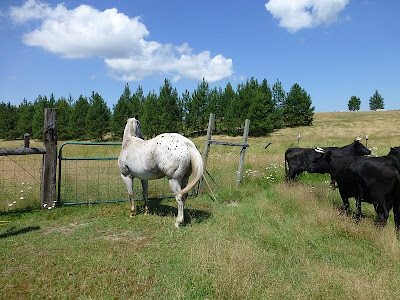 Brit was the first through, of course. 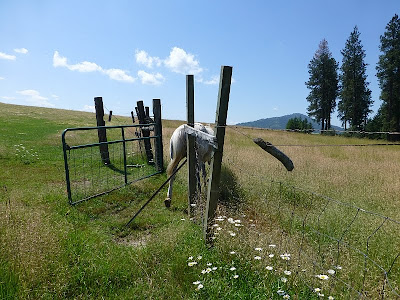 The others swiftly followed. 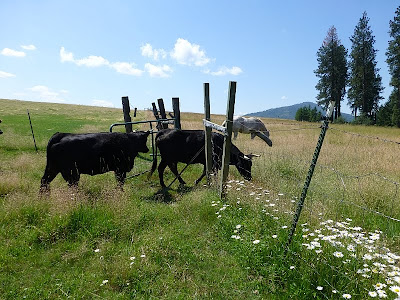 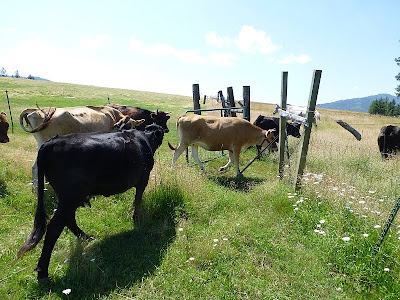 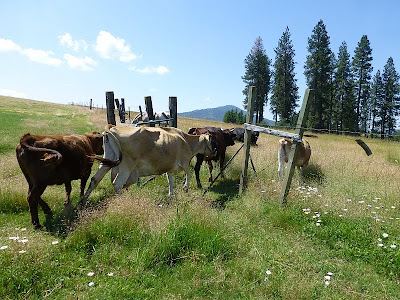 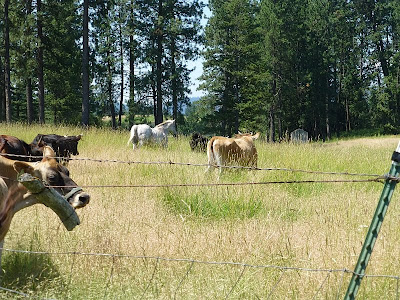 Younger and/or newer members of the herd wondered what was going on. 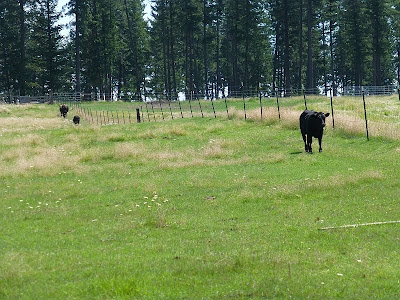 But they quickly caught on. "Wait for me!!" 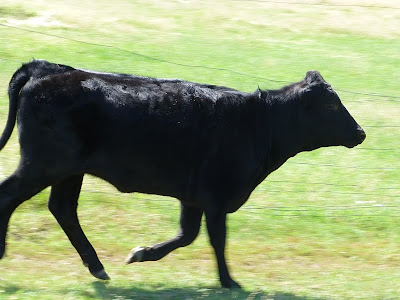 Lilly and her bull calf Atlas were the last ones through the gate. 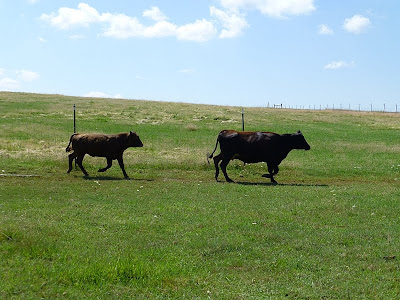 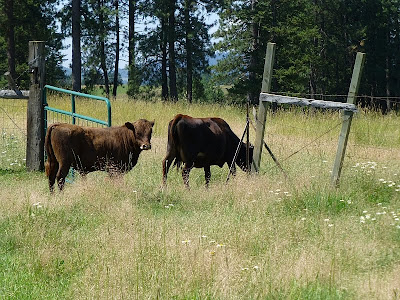 We'll keep the beasties on the neighbor's land until early October or so. They come up to say hi about once or twice a day, but meanwhile it's nice to know they have plenty of grazing, shade, and water.
Posted by Patrice Lewis at 10:19 AM