A cry in the night

A couple of days ago, I woke up very early in the morning. It was about 3:15 am and the eastern sky was barely beginning to get light. I lay in bed, half-drowsing, when I heard a cry in the night. Once, twice. This is evidently what woke me up.

It was a strange cry, not quite bird-like yet almost resembling a peacock’s cry. A few minutes later I heard it again, twice, coming from our woods. Then silence.

After lying in bed for awhile, I got up and went about my morning routine. But later as the family got up and then as I spent time in the garden weeding, I kept hearing that strange cry.

Finally I came into the house, grabbed my camera and cell phone, and told Don I was going for a walk. “I heard that cry last night before I went to bed,” he said. He too was curious what it could be.

I walked into woods and then stood still for a few minutes, waiting for the cry so I could get my bearings. It came once, twice, then silence. I walked in that direction.

A few minutes later I stopped once more and waited for the cry… and then nearly jumped out of my skin, since it came about five feet away from me from a copse of bushes. 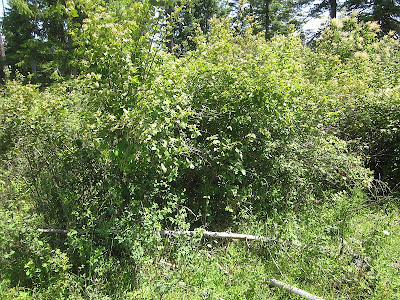 I started pushing into the bushes and heard an invisible crash as a deer fled the scene. Hidden in the copse was a tiny newborn fawn. Its eyes were glazed, its head stretched out on the ground. As I watched, it gave a loud, wailing cry once, twice, ending with a sad whimper. I saw no obvious injury, but it was apparent this little baby was very very sick. 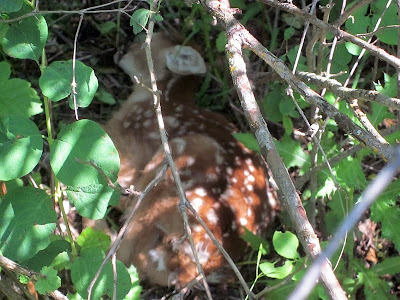 Up to this point I never even knew a fawn could cry, much less with this kind of volume. It was even more amazing that it could cry so loudly and for so long considering how weak it was.

The baby was dry, with lick marks on its fur. My guess is it was born the evening before, licked dry by its mother, but not able to stand to get the life-sustaining nourishment it needed.

I didn’t touch the fawn, of course. A human scent on a fawn virtually guarantees its mother will abandon it. Clearly it was unable to stand and nurse. The doe had been lingering helplessly nearby, watching over her dying baby, unable to do anything but lick it and stand vigilant. 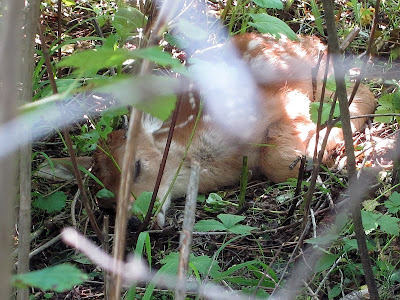 I called Don on the cell phone and explained the situation. “Should we shoot it?” I asked.

Don thought for a moment. “No,” he said at last, “let’s just leave it alone and let nature take its course. We’ll check it in the evening and perhaps do it then.” I’m perfectly aware Don had no desire to kill such a tiny helpless thing, though being an honorable man he would do what was necessary. But we also didn’t want to cause unutterable distress to the poor doe, who would see her baby shot right before her eyes.

So I left the copse and gave the doe the dignity to once more stand guard over her fawn and mourn.

I checked the next morning. The fawn was dead and the doe was gone. Wild animals cannot bury their dead, but can they grieve? I would like to think they do. 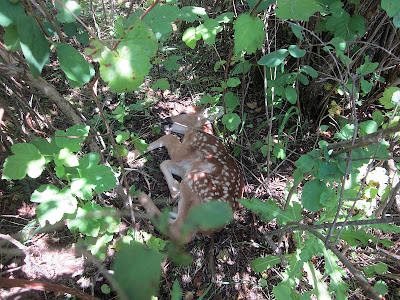 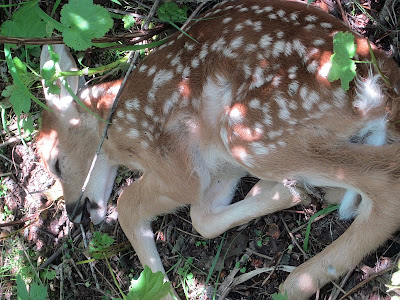 Since it was a single fawn, I’m guessing it was this doe’s first. Usually deer have singlets with their first pregnancy, and twins with every pregnancy thereafter. The doe will have to wait until next summer to raise her babies. I hope she succeeds next time. 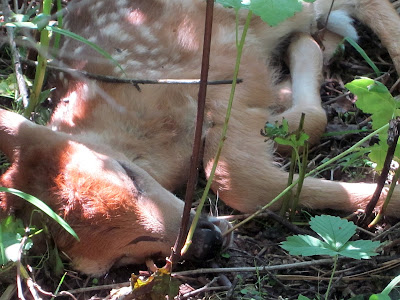 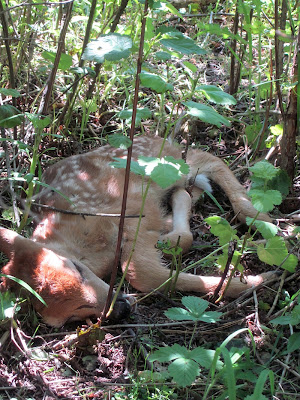 Nature isn’t always pretty.
Posted by Patrice Lewis at 7:43 AM