Derecho storm -- a taste of grid-down

Doubtless there are many of you who were (or still are) impacted by the massive super-dericho storm that slammed across the eastern United States this past week.

When I was at the Preparedness Expo in Colorado Springs last May, I met a delightful couple named Wilson and Chaya who run a spiffy online store called Pantry Paratus (really cool store, go check it out). Wilson happened to be in Washington D.C. on business when the storm hit. He sent pictures of some results:

I am traveling through DC at the moment (jealous?), and last night we had some kind of storm. You can see the tree down. 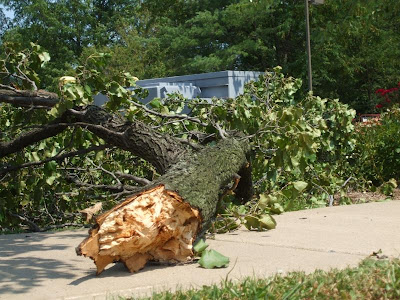 Cable (not that I care about TV, but internet and phone) was down, power in some areas and traffic signals were out for about 3/4's of the day. We are due to get another storm tonight, so the panic begins.

I attached a few photos so for your analysis: long lines at the pump... 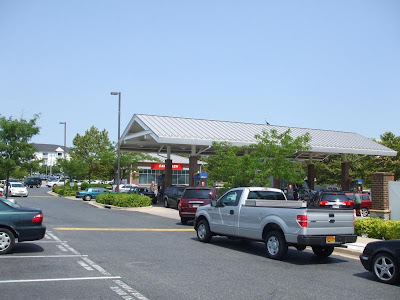 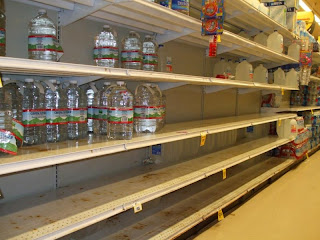 But my favorite is the other Exxon gas station (and you can read the sign for Washington in the distance) is the one that I like the best. 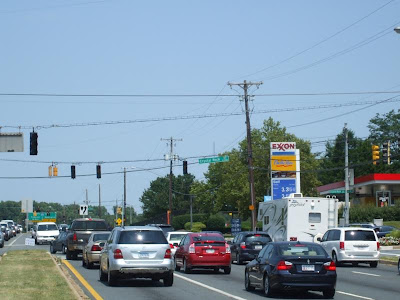 Why? Because that particular gas station is out of gas, and you will never guess who the neighbor is behind the chain link fence . . . wait for it . . . The Dept. of Energy. May be it is just my twisted sense of humor, but I thought that you would find that interesting too.

Wilson's observations were echoed and confirmed by endless news articles over the past week. And of course if you're one of the millions impacted by this storm, you know what he's talking about first-hand.

If there's a silver lining to the massive disruption, impact, and tragedy this storm jas wreaked, it's that the need for preparedness was underscored and illustrated in graphic terms. There are various articles (such as here) which highlight this.

There was also a letter on SurvivalBlog yesterday from another person in the trenches. Usually I provide a hyperlink directly to the article, but for some reason it wouldn't pull the specific permalink up, so here's the text in full (with credits to the July 4 edition of SurvivalBlog):

Letter Re: Lessons From The Derecho Storms
Mr. Rawles:

Today is Wednesday, July 4, 2012. I am writing from a small town in central West Virginia and I would like to share some thoughts, observations, and lessons from the recent Derecho windstorm experienced by the mid-west and east of our great country. As I sit here, we are in day six of total power outage caused by a freak storm that came with little or no warning. Power may not be on for another four days.

I have been a long time reader of your blog and have lots of lists and plans but sadly my preparations for hardship were found lacking. We here in West Virginia are used to disasters such as floods but the mountains tend to shield us from tornados and high winds are rare. Within an hour span power was knocked out to 50 of the 55 counties in the state. The towers of major transmission lines were twisted wrecks. And then the “fun” began. This incident has galvanized me and my neighbors. My observations will be preaching to the choir in this forum but here goes:
· Gasoline was gone within 24 hours. Lines were just like the 1970s fuel embargo.
· Ice became the chief commodity and was in short supply or no supply.
· Water was out for most people at least for the first two days.
· Most big box stores and gas stations were up on generator power by day three.
· A new shipment of 250 generators was sold in a few hours.
· Temperatures in the high 90s added another layer of difficulty.

Most people kept their cool and neighbors helped each other. Many are much better neighbors now. With all traffic lights out it was hectic but for the most part people were safe and courteous. We used to have a tourism commercial about West Virginia that showed four cars pulling up simultaneously to a four way stop and each driver motioning for the other to go first. The tag line was “Traffic jam, West Virginia style”. I am happy to say that was true in most cases.

The holes in my preparedness were:
· I needed good high quality kerosene lanterns with reflectors and extra wicks. The cheap Chinese red ones at Wal-Mart are toys.
· Batteries, Batteries, Batteries.
· Propane, Propane, Propane.
· I needed a good tough portable radio with multiple charging sources. I was reduced to listening to a car radio and risking battery and gas.
· I should have had several barrels of water on hand
· A couple of deep cycle marine batteries would have been nice.
· A generator and fuel reserve have moved from the nice-to-have list to the have-to-have list.

The local radio station stepped up to the plate and suspended normal programming and went live 24 hours on generator with news and call-ins giving information. The unpreparedness of some of the call-ins was instructive. On the second day several were screaming for FEMA to arrive. Well, in our recent primary election, Democratic voters supported a prison inmate in Texas with over 40% of the vote, so I do not expect FEMA anytime soon. It is obvious to me now that there will be a die-off in any major disaster. Those on medical oxygen or diabetic will not survive. There is also an element of just plain stupid out there. One lady drove 30 miles to a neighboring town to get water for her children when simply listening to the radio would have directed her to a fire station two blocks from her house.

Mr. Rawles, I know your feelings about areas anywhere east of the Mississippi but I must say that, in general, West Virginia enjoys some advantages as a retreat. Property prices and taxes are low, low population density, low crime rate, no urban problems, minimal gun laws, and a conservative and religious population. For the most part, it is “Almost Heaven”.

I have turned a corner on preparedness and I hope my neighbors have too. Bottom line: We must have three days of supplies at a minimum and build from there. Thanks for your blog.