Wow, what an amazing two days it's been so far! This event spans four days, and we've already sold nearly half the stock we brought! Yes, yesterday we sold an awesome 45 pieces! That's one more than yesterday, and two more than the same day last year. Wow. And again I say, wow.

My friend Wendy and I started the day at a nearby coffeehouse where I indulged in a steaming cup of chai tea (a rarity) and we yakked a lot between working on our computers. It's so much fun to visit with this dear woman. 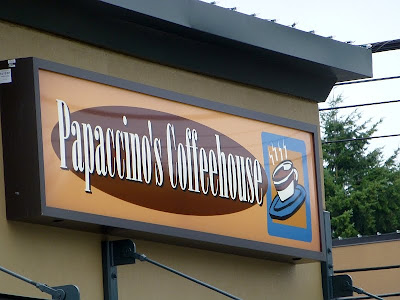 Parked right outside the coffee shop was this miniature car. Wendy says they're very popular in Portland. I can imagine -- the gas mileage must be through the roof. 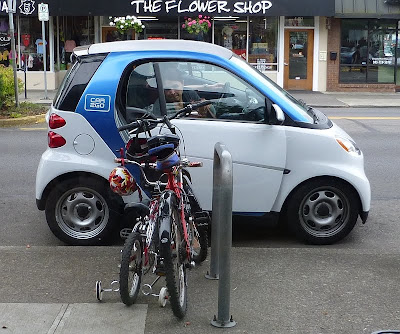 Then it was off to the event. The day started out cloudy and cool (before clearing to a nice sunny day), and I think the weather helped sales. Everyone could relax and not worry about the weather being too hot.

In honor of my interest in wacky T-shirts, my friend Mick (who is working the booth with me this year) wore this gem. 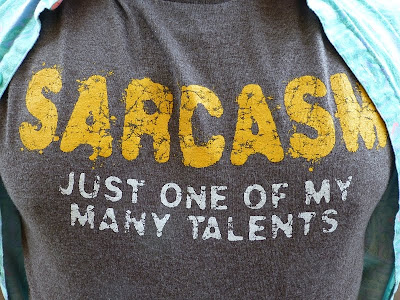 Didn't see too many other wacky T-shirts except for this one: 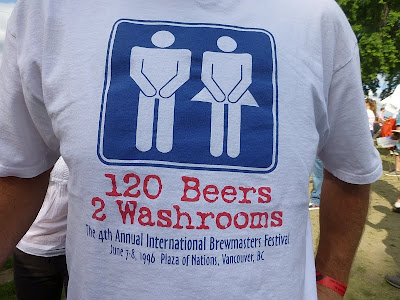 My booth is located not far from the stage, so we're subject to whatever is being played (good and bad). Yesterday was good. There was a reggae band... 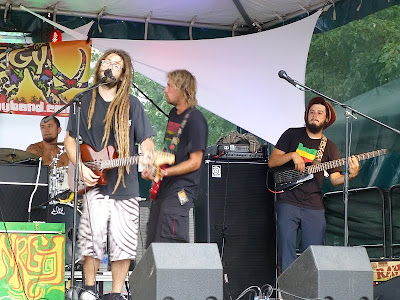 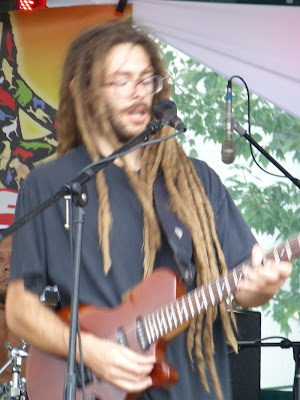 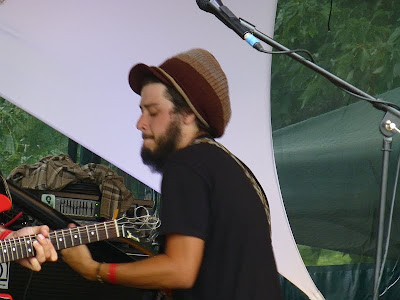 ...and then in the afternoon a band started playing called Cherry Poppin' Daddies, whose specialty was swing. Apparently this band was wildly popular in Portland about ten years ago (when swing music enjoyed a revival) and oh man, it was easy to see why. The crowd in front of the stage was packed, and random people all over the place were bopping in time to the music. Fabulous band. 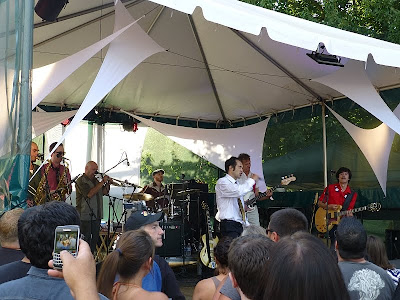 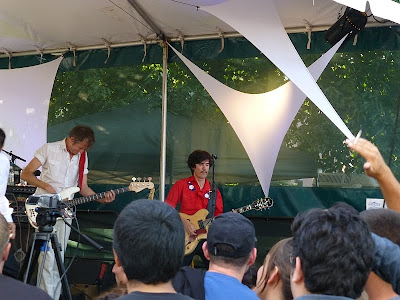 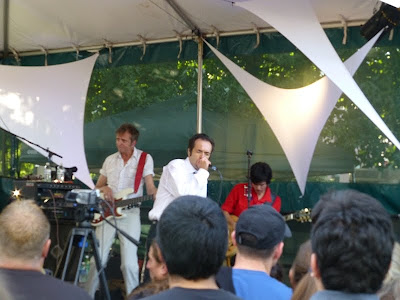 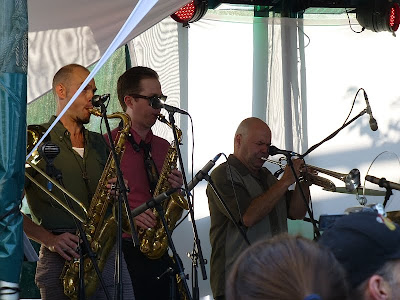 An old and dear friend named Christy stopped in to say hello. She used to live just up the road from us when we lived in Oregon. Couldn't believe my eyes when she walked into the booth! Her daughter is now in college. Sheesh, where do the years go? 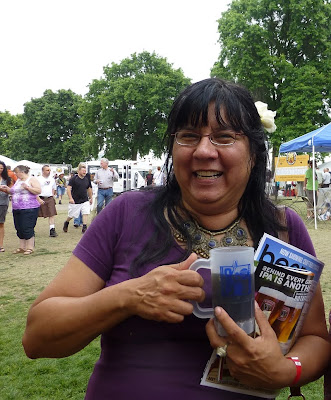 Portland has to be the most tattooed city I have ever seen. This gentleman sported some amazingly detailed artwork on his calves. This is his daughter... 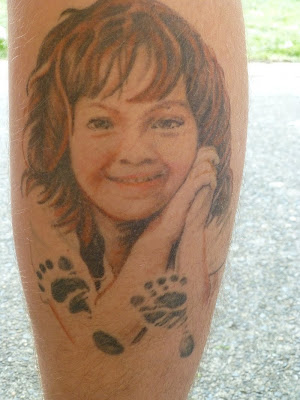 ...and his father (who recently passed away). Admirable but rather, well, permanent tributes. 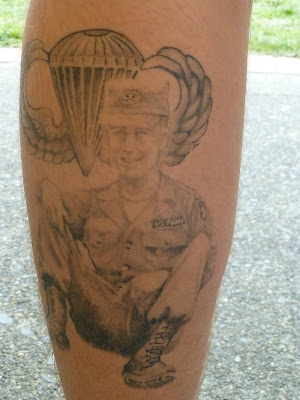 A woman walked by with a baby carriage... made specifically for a dog (with zippered screens). Funny! She gave me permission to take a photo. 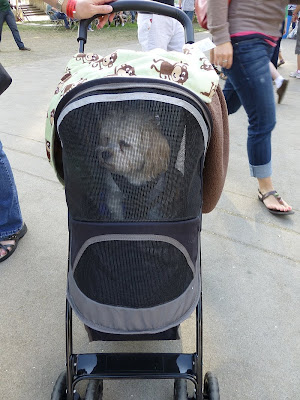 It was a day of pretty tame sights until this startling woman started walking around, dressed like a... well... 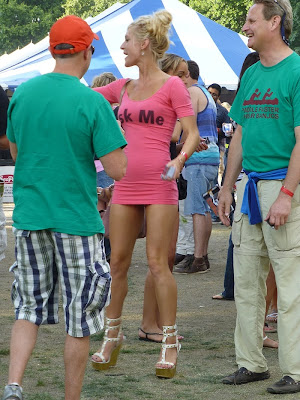 Come to find out she was a walking, talking advertisement for a strip club. Yes really. She was passing out business cards (a customer told me this). Only in Portland? Who can say. 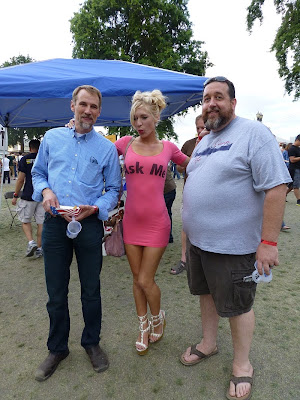 As the afternoon wore on, I removed first two, then three, then four of the lowest shelves from the shelving units. 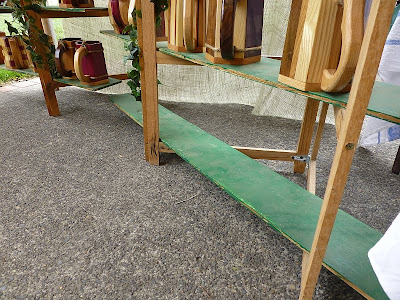 These I stacked in the back of the booth. 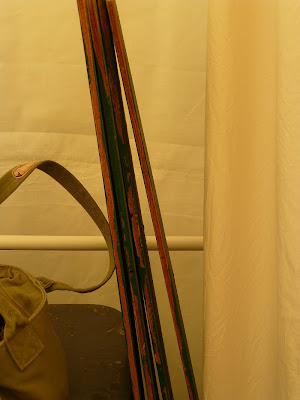 Even so, by evening the remaining shelves were looking decidedly sparse. 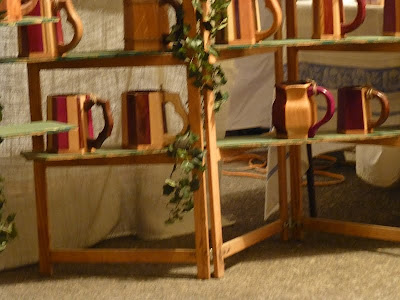 Today my friend Mick and I will remove and entire shelving unit and fill the shelves of the remaining units full once more (it's a sales trick -- products on full shelves sell better than products on half-empty shelves, go figure).

Thank you for all your prayers and well-wishes, they seem to be working!
Posted by Patrice Lewis at 9:02 AM