One last entry in the Safecastle Freedom Award

We have time to squeeze in one last entry in the Safecastle Freedom Awards writing contest. We'll read through the entries and select a winner to send to the Safecastle folks. The rules for writing are posted here. The Safecastle website is here.

Just FYI, the contest prizes were modified due to poor economic conditions. You can see the modifications here.

But our prizes remain the same! To wit: 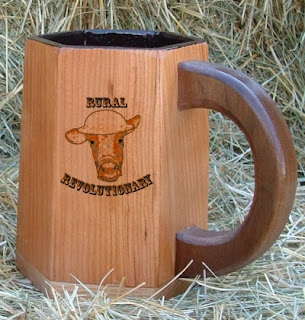 Unlike traditional careers, a survivalist does not need to attend one university course to become skilled. The training required is not even the same from one survivalist to the other and the reasons why one has opted to become a survivalist range drastically from the worries of a rogue government to preparing to handle any natural disaster. Most people have food, shelter or clothing but few appreciate how these items are obtained. A survivalist has learned how to take life to the next level by being able to provide the basics and more.

What is unsaid is that one can survive a catastrophic event and thus become a survivalist. This is how life changed for me, as I became a survivor that augmented my life to one of survivalist. The transition was not overnight, but of several years in the making. I became a survivor not as a result of defeating all odds and living through a natural disaster, but of something so small that aside from my husband and children no one else’s lives were impacted. You see many do not realize that a survivalist prepares for anything to include something so miniscule that it did not make a ripple in the world aside from the impacted persons.

I came in the back door and crept in slowly. This is why I know that anyone can become a prepared survivalist, anywhere, anytime, any way. The cliché sounds hollow but it is true, if I can do it so can you. Time slowed to zero speed as I lived through the crisis and I was able to think years in the future with panic, dread, fear, and worry. We lost our very secure life and went from being suburbanites to nothing in a blink. Well more like on a thousand foot of highway off the beaten path in Nevada. Auto accidents happen every day all over the world and that is how I launched into living the life I live now.

I did not begin without first doing a few things. I knelt down and prayed. I knew I was completely broken, afraid and downright scared. Once I prayed, I rolled up my sleeves and planned. Until January 1, 2005 I never considered any life aside from the one of climbing the ladder of success. After January 1, 2005 my perspective drastically changed. I first decided if my loved ones were alive then I could go on. In fact, I sometimes would gasp for air in a panic and have a few times over the years as my reality was that my husband had died. Well that is what I was first told when the young officer came to the front door. The initial reports were wrong and Bill survived but he sustained neck and back injuries. As a result of that day my family is completely and forever changed.

Because of the accident we had to adapt to living far less than half of the income we had previously enjoyed, and without any benefits. So my lists making days began. I wondered first, what can go and realized we had to go. We moved as we could no longer afford to live in a neighborhood and region of the country that was so expensive. Secondly, we wanted to be able to have a small piece of land, as I recalled my childhood and growing up in rural Ohio and knew we could garden and ‘put up’ foods. I had no idea what that meant, but decided that if we wanted food to continue to feed the family that I would learn.

As a survivalist in training I discovered the public library. I was so used to buying a book when I wanted information I had forgotten that the world is truly a book away, and everything was free for the reading! I checked out many books and began my journey into becoming a self-reliant survivalist. I started first reading about how to sew things for the home, and this project lead to the next and the next. I have learned how to can, dehydrate, pickle, butcher, make soap, shampoo, deodorant, household cleaners, dog food, feed sheep, goats, chickens, ducks, geese, turkeys and of course build simple sustainable buildings for our farm. I guess now is a good time to mention I am barely 5 foot tall.

What this means is that in any situation I am armed with something that will not be taken away in floodwaters, or lifted away in a tornado. I armed myself with the ability to survive any situation by learning how to grow, preserve, and put aside food for the future. I armed myself with skills seemingly lost a generation ago, as I opened my yard up to chickens and learned everything those that settled our nation knew. My research truly has been a hands on field study and I am no longer afraid of tomorrow. I’ve found myself reflecting upon those sturdy pioneers that settled the great American west in the 19th century. Often the settlers were alone and had to improvise for every need they had, and I realized that in a few short years I had become like those that have walked before me. The realization was one of confidence but more of humility as I really appreciate the effort it takes to be self-sufficient.

I confess that coming in the back door as a survivalist was not my choice, but I am forever grateful that I was shaken into the common sense of preparing without losing my husband of now almost 24 years. As I sit and type my thoughts on being prepared, becoming a survivalist and living life as a prepper, I must calmly remind anyone who is new to this idea, that all is well. Start small, read as much as you can, build up what you can do and you will have taken your survival to the next level, and for that I say “Welcome Aboard!”
Posted by Patrice Lewis at 7:27 PM