Longing for the garden

Unlike the nasty and apocalyptic winter the poor folks back east are getting, we're having mild temps and (at this moment) no snow.

I took this photo of the garden on December 31 when we had a few inches of snow and some bitterly cold temps. 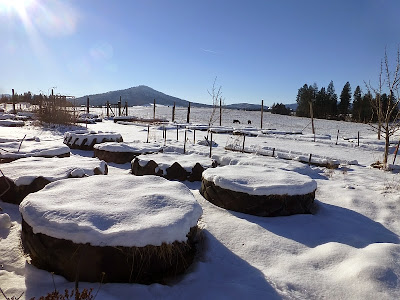 But for the last few weeks, temps have risen and hovered in the 40s. We're even getting sunshine sometimes. As such, the gardening bug is biting, long before we can rationally think about doing anything productive. This photo was taken February 16. 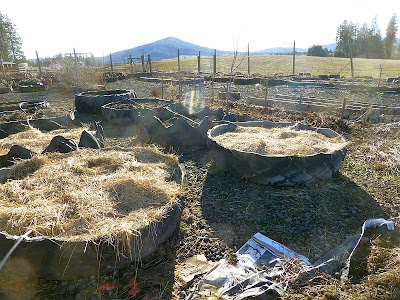 I walked around the garden the other day and began deciding what to plant where.

The beds with straw on them are where I planted the multiplier onions a reader sent last fall. I'm anxious to see how well they grow. 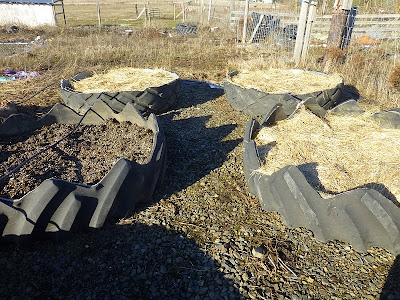 There are five other tires in this section. Last year all eight tires were planted in potatoes. You're not supposed to plant potatoes in the same spot two years in a row (for fungal reasons, I understand) so I'll have to come up with something else to plant here -- probably carrots. 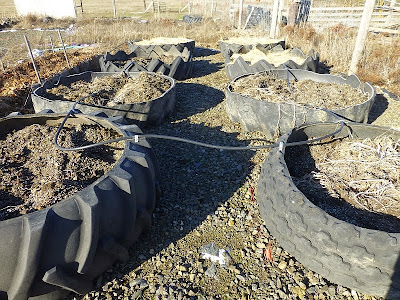 Here are the herb tires. They did very well last year and I'd like to put in more, particularly for basil, of which we use a lot. 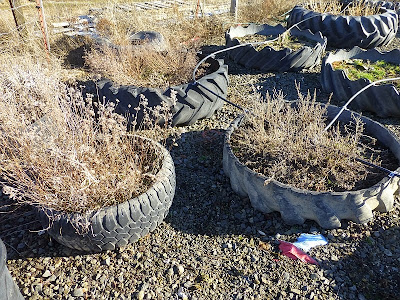 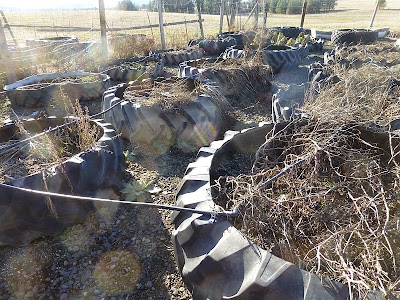 We still have room for lots more tires. This particular spot is between the blueberries and raspberry bushes. We plan to put four to six more tractor tires in this area with blueberry bushes in them. 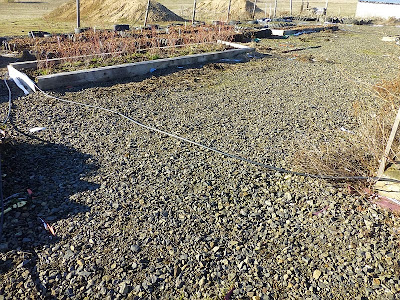 Here's the garlic boat. Last fall I planted it full of garlic and buttoned it up with hay mulch. No need to do anything with it (except water, as needed) until next summer. 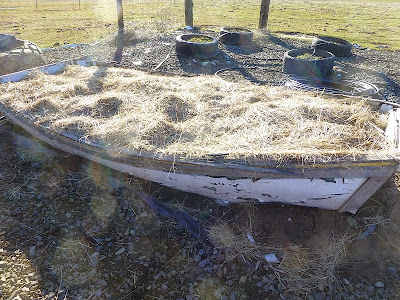 I peeled back a bit of the mulch and confirmed yes, the garlic is growing. I anticipate a bumper crop. 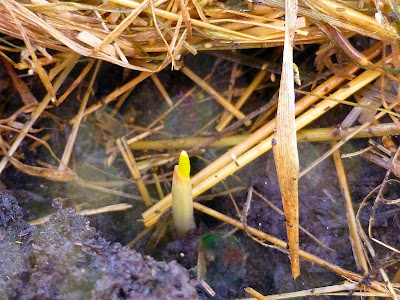 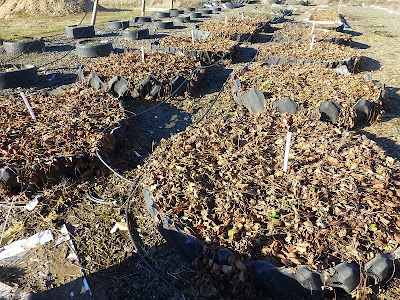 They may look dead, but there's growth. 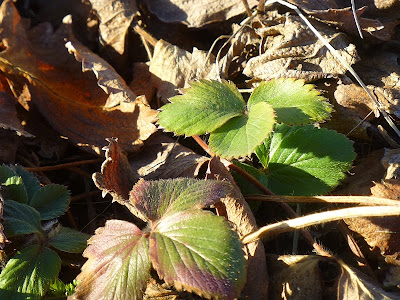 By contrast, here's what they looked like last summer. 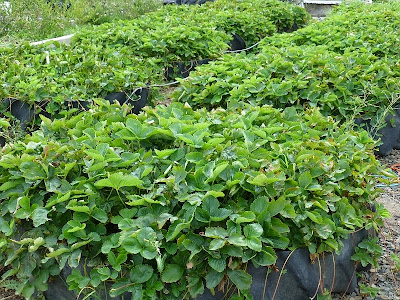 And yesterday (from the same angle). 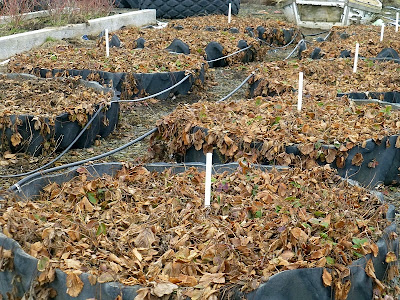 I planted two beds of carrots very late in the season last summer, but they grew very well. However I decided to leave them unharvested and let them go to seed (carrots are biennials). 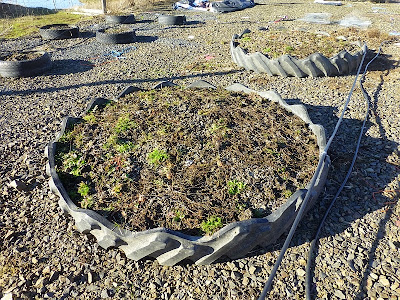 I didn't mulch them, but they wintered well and have a bit of green growth at the top. 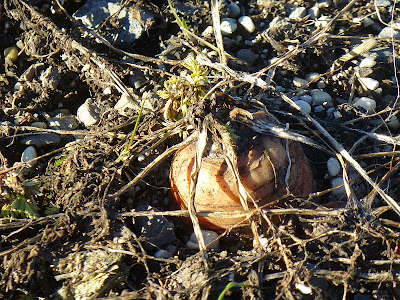 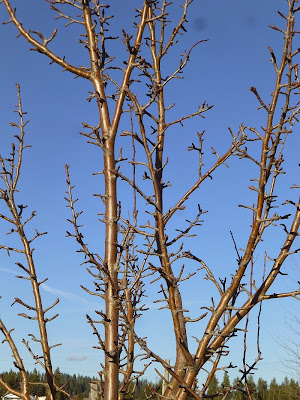 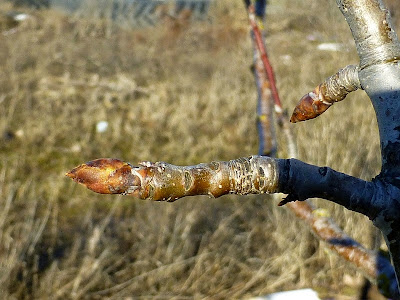 The pond is brim-full. 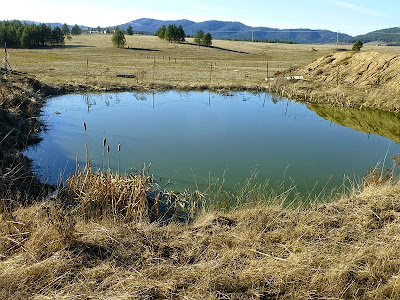 These are the corn tires. We had a nice corn harvest last summer and plan to at least double the number of tires of corn this year. 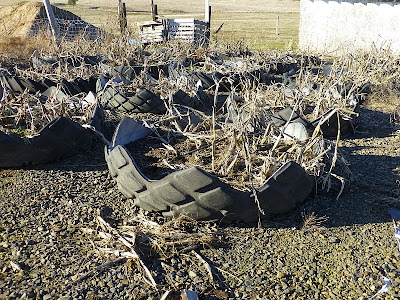 Wanting to do something garden-related, I decided to start clearing the corn beds. I figure if I work at a nice easy relaxing pace, I'll have the whole garden ready to go by the time spring rolls around. 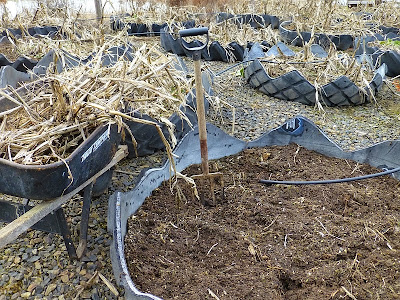 It might be too early to plant anything, but it certainly isn't too early for weeds to take deep root. I made sure to dig out every possible weed as I went. 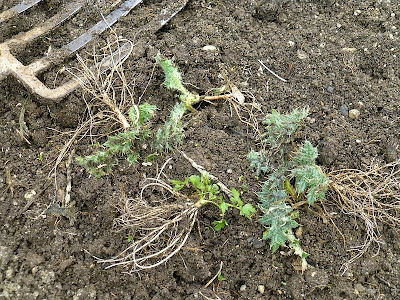 Dug up lots of worms too, an excellent sign. 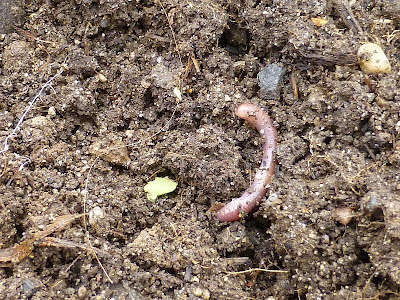 While I worked, I was serenaded by robins, sparrows, and blackbirds... 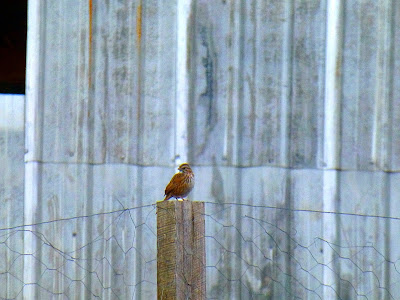 ...while overhead, flocks of swans headed toward the lake. 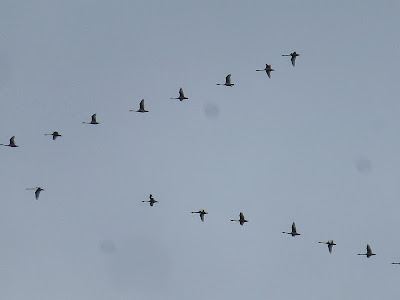 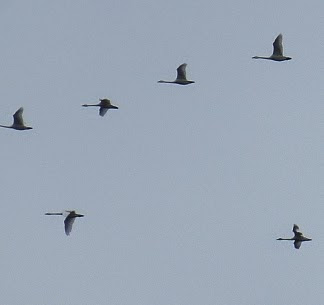 An ant's nest in the yard had these large specimens clustered around an opening, moving very slowly. 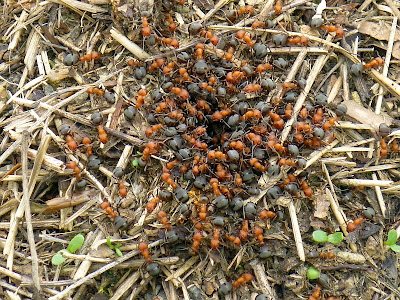 I can't claim spring is here because the weather could flip-flop at a moment's notice. But neither are we buried in snow like the poor folks back east. So I'll enjoy the mild weather while we have it, and dream of the garden to come.
Posted by Patrice Lewis at 9:05 PM