We've had a dry spell that's made me kinda complacent about harvesting the last of the garden goodies, but it needed to get done; so last week I finally got around to picking the pears.

Because the pear tree had been hooked up to the drip irrigation system all summer, the resulting fruit was beatiful. The pears were about a pound each. 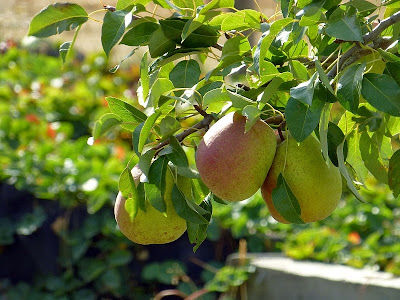 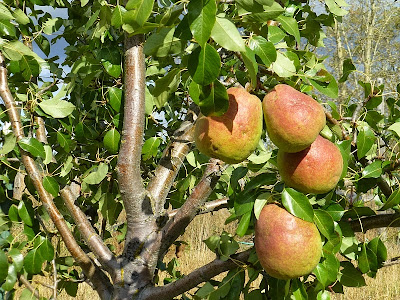 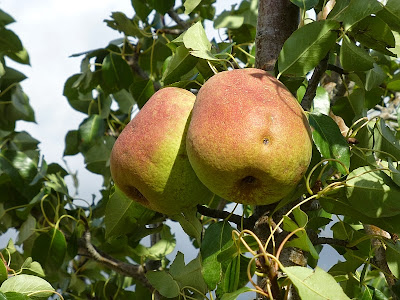 This little tree isn't terribly tall, but it's taller than me, so I used the stepladder to reach the higher branches. Time to get a fruit picker (we had one in Oregon and it worked great, but we've lost it). 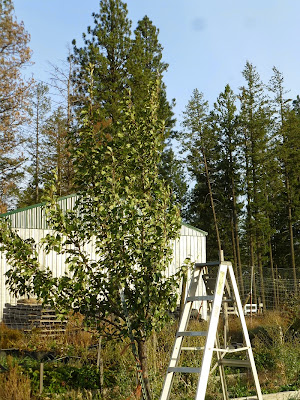 Here's the harvest from our single tree. Not enormous, perhaps, but it's the most I've had to date from this tree and I'm tickled to pieces. 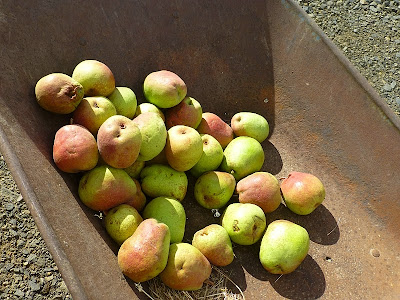 I spread the pears out to ripen, but left them a bit too long, as some of them began to develop bad spots. Time to can! Incidentally, here's a tip to tell when a pear is ripe: gently press the flesh just around the stem. If it "gives" a bit, the pear is ripe. 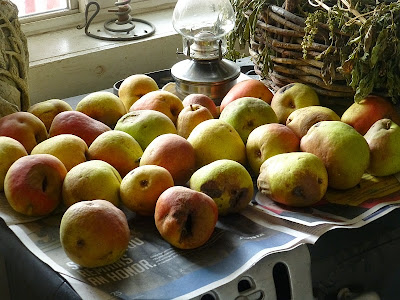 I peeled and sliced into rough quarters (some were smaller due to the need to cut out bad spots). 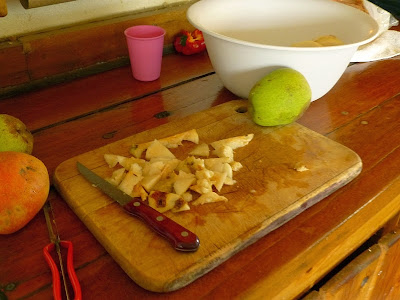 I gave a bit to Lihn, Younger Daughter's Quaker parrot. She thought it was the greatest thing since sliced bread... and she loves sliced bread. 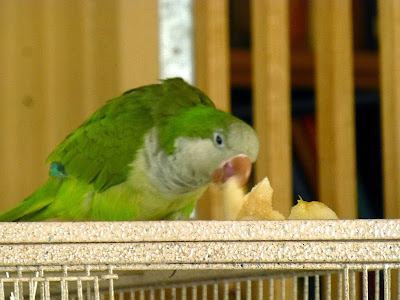 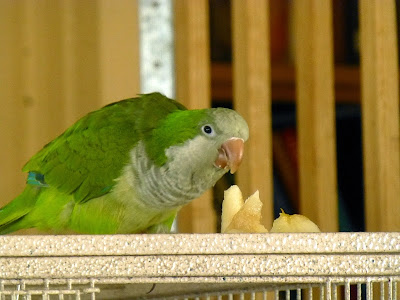 I packed the pear pieces into quart jars, then made the syrup. I prefer a thin syrup, which is a 2:1 ration of water:sugar. The syrup should come to a boil. 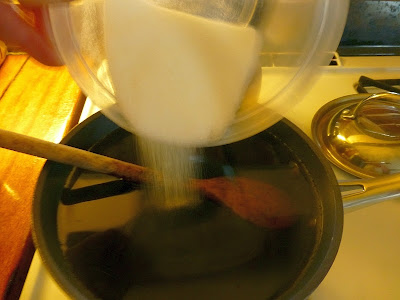 Scraps. Last year I made pear vinegar out of the fruit scraps, but I still have plenty of vinegar in my pantry, so these scraps went into the compost pile. 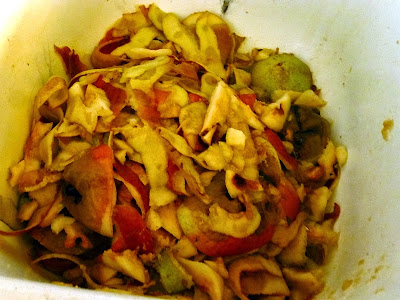 I ended up with seven quarts and one pint of pears. 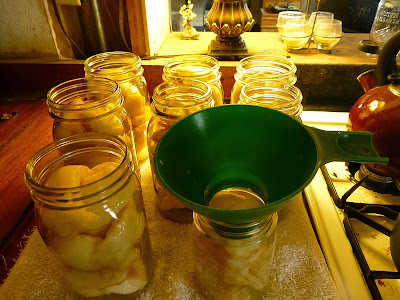 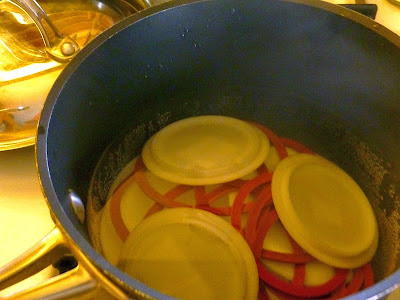 Filling the jars with syrup. 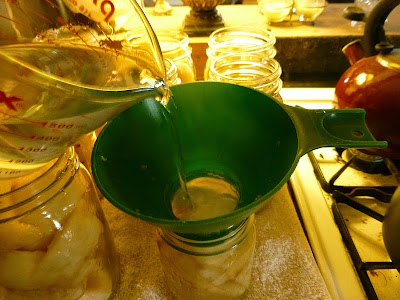 Wiping the jars and checking for nicks in the rims. 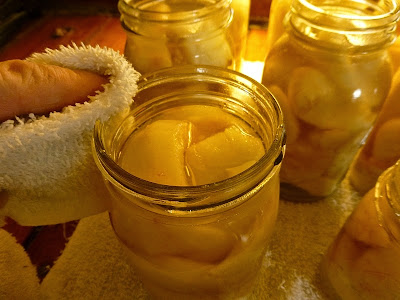 Whoops. This jar had a small nick. Tiny, but just enough to keep the lid from sealing. 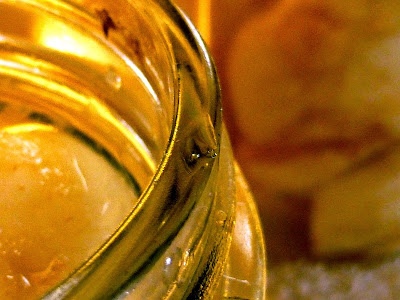 So I cleaned another jar and upended the contents of the nicked jar into it. 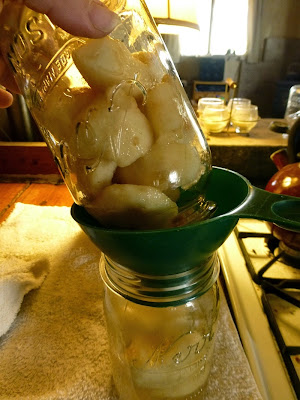 (I cleaned the nicked jar and demoted it to storing dry goods.) 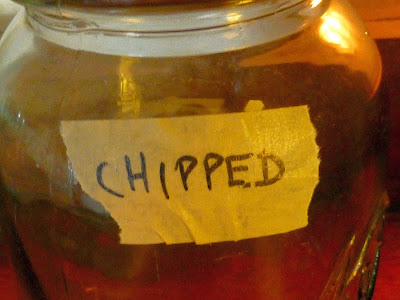 Putting the lids on. 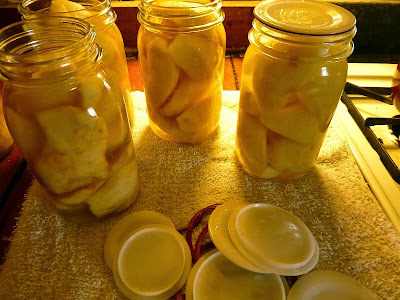 Into the water bath. Cold-packed pears need to be boiled for 30 minutes (for quarts). 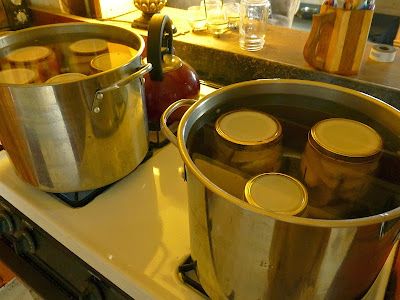 Out of the canner and onto the counter, cooling. 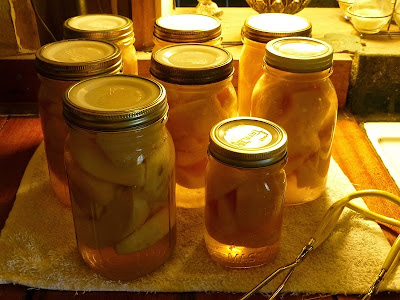 I always love it when I can take a food item from beginning (planting the pear tree ten years ago) to end (on our pantry shelf). 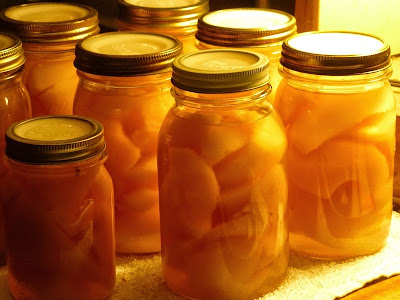 I love living on a homestead.

Posted by Patrice Lewis at 9:10 PM