Does our stuff own us?

A few weeks ago there was a thought-provoking piece on ZeroHedge entitled Do We Own Our Stuff, Or Does Our Stuff Own Us? (reprinted from OfTwoMinds.com)

The essay asked, "The frenzied acquisition of more stuff is supposed to be an unalloyed good: good for "growth," good for the consumer who presumably benefits from more stuff and good for governments collecting taxes on the purchase of all the stuff. But the frenzy to acquire more stuff raises a question: do we own our stuff, or does our stuff own us? I think the answer is clear: our stuff owns us, not the other way around." 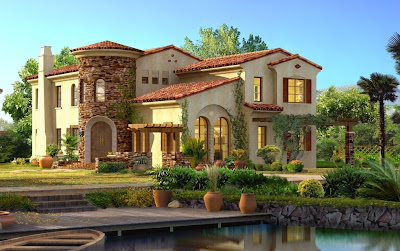 This post got me wondering whether we (the Lewis family) fall into that category of who owns who.

We certainly don't subscribe to the "frenzied" acquisition of anything. The "normal" stuff most people think about acquiring leave me cold. I am utterly indifferent to fashion, jewelry, shoes, or other traditionally feminine interests. Yet I could (if not fettered by a budget) spend umpteen dollars on books. Hey, we all have our weaknesses. 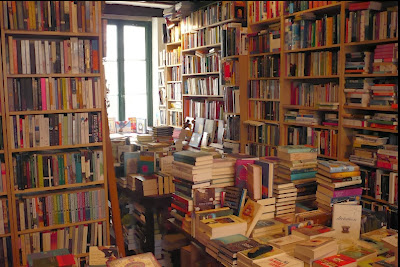 That said, we have certainly acquired a fair amount of stuff, some of it very expensive (most recently, the wood cookstove and the tractor). These are items we feel will enhance both our livelihood and our self-sufficiency.

So as to the question of whether our stuff owns us, at this point I'd have to say "yes." But let me qualify that statement.

We moved from Oregon to Idaho in 2003 in part to obtain more land at a cheaper price so we could expand our livestock-raising efforts (we only had four acres in Oregon). Livestock, as anyone knows, ties you down. We can no longer take trips as a family; one of us must always be home. I suppose we could hire a house sitter, but so far it's never been necessary. 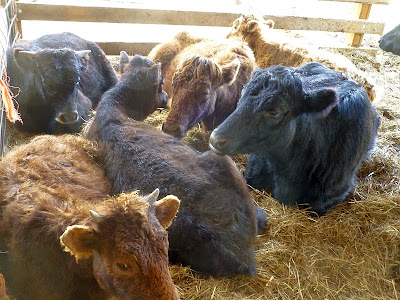 So who owns who? After giving the matter some thought, I realized that our "stuff" is also our livelihood. Our computers (since I'm a writer), our livestock, our garden, this blog, the shop with all our tools... all these contribute toward how we make a living.

In this regard, most people are "owned" by whatever obligations they undertake to earn an income. Short of winning the lottery, most people are not free to just jaunt off into the sunset, leaving their jobs behind them.

The article's writer states, "Frankly, I wouldn't accept a new big-screen TV, vehicle, tablet computer, etc. etc. etc. at any price because I am tired of stuff owning me. I don't want any more entertainment or computational devices, musical instruments, vehicles, clothing, kitchen appliances, or anything else for that matter, except what can be consumed with some modest enjoyment and no ill effects."

I certainly agree with this sentiment. Possessions like those listed above leave me cold anyway. I'm a Luddite when it comes to electronics, and fight tooth and nail against even downloading new computer programs (my husband will chuckle when he reads this since he knows how true it is!).

But the author of this piece seems to think those who own anything are enslaved by them. My question is, if you owned nothing, what would you do? Take off and travel the world? On whose money? Except for those who are independently wealthy, the rest of us have to be grounded enough to work for a living.

The secret, I think, is to enjoy what you do. Yes we're "enslaved" by our livestock and garden and work-at-home lifestyle, but since we like owning livestock and like growing a garden and like working at home, we don't feel enslaved. Indeed we feel freer than many people, since we can grow and raise a significant portion of our food, and we don't have to commute. 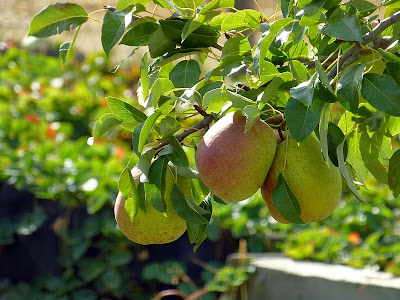 Boston Globe columnist Ellen Goodman once said, “Normal is getting dressed in clothes that you buy for work, driving through traffic in a car that you are still paying for, in order to get to the job that you need so you can pay for the clothes, car, and the house that you leave empty all day in order to afford to live in it.”

Kinda spot-on, isn't it? Unquestionably there's a higher correlation between material possessions and work hours which can become a vicious circle. You work hard and so have less time, so you buy time-saving devices which cost money, so you have to work harder to pay for those time-saving devices.

In the book Better Off by Eric Brende, the author and his new bride lived for 18 months among a conservative Mennonite community utterly devoid of modern technology. They cooked on woodstoves and traveled by horse-and-buggy and plowed by horse and harvested and threshed by hand, etc. The book was a fascinating analysis of which tools are truly useful, which are not, and the value of labor.

At one point Mr. Brende even questioned the need for horses, pointing out how much labor goes into feeding and housing the animals that powered the community. If the number of horses were reduced, he argued, then presumably the amount of work and expenses associated with them would lessen as well. 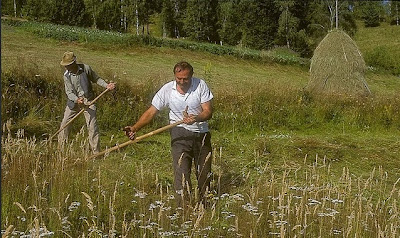 And if this argument can be made about horses, how much more can it be made for $50,000 automobiles, massive mortgages, designer wardrobes, and consumer electronics? How much labor must people undergo to pay for those things?

Mr. Brende did admit that without the constant atmosphere of industrious work in the low-tech community, there would then be the risk of idle hands, particularly among the youth. If too much leisure occurs, what kind of mischief would then happen?

Interestingly, after the Brendes left the Mennonite community and rejoined the modern world (they now have three children), they continue to live as low-tech a lifestyle as is possible in an urban environment. Recently I saw a YouTube interview with them, filmed several years ago. At first I found myself steeped in admiration at how well they've managed to stay true to their values -- Mr. Brende points out how we spend most of our time serving the needs of technology rather than having technology serve our needs -- but then I began to wonder. Unlike the Mennonite group they lived in when first married, where everyone lived a similar lifestyle, the Brende's children are growing up in a place where they find themselves at odds with their peers. As the kids get older, will they reject their parents' philosophy and embrace a high-tech lifestyle? I don't know.

It occurred to me, as I watched my children on their laptops, that maybe it's not good for children to be TOO low-tech in a high-tech world. Once they leave the nest, they have to get along in the world and will have to make competent, mature decisions about the amount of technology they will want in their lives. But since our girls have grown up without iPads and smart phones and other hand-held wonders, they've never become addicted to tiny screens. They've never walked into walls or ditches because they're not paying attention to their surroundings.

So maybe, just maybe, it's better to introduce a judicious amount of technology during adolescence (NOT childhood) as long as it doesn't get out of hand.

On the other hand, Mr. Brende points out something very important during the YouTube interview: his home is the center of his life. He doesn't spend his time serving technology; his wife and children join forces to achieve things without the technology. Their lifestyle is family-centered and focused on what's truly important. 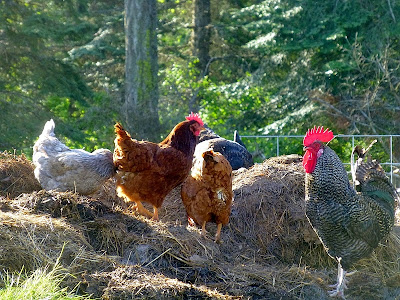 In that respect, he certainly has the right idea.
Posted by Patrice Lewis at 5:54 AM