Yesterday morning around 6:30 am -- just when it was getting light enough to see outside -- I suddenly heard the cattle bellowing in excitement. Looking out the window, I saw them galloping up to the bull pen and milling about. I grabbed a coat and scarf -- it was 22F outside -- and what did I see? 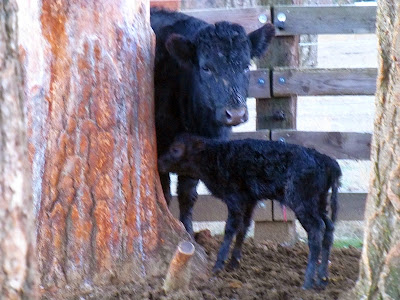 A calf! Shadow, who's been our bull Samson's pen mate since late December, had borne a calf! 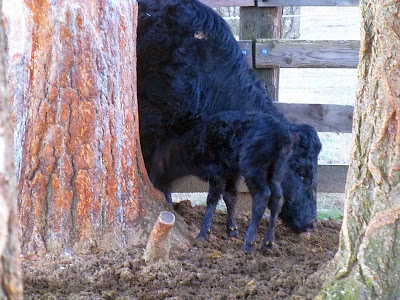 This was totally and completely unexpected. Shadow, you may recall, lost a calf two years ago. It was born dead and was the first calf we'd ever lost in 15 years of owning cattle. Poor Shadow was understandably upset, and as the years went by it seemed she was barren as well. She had plenty of exposure to the bull, but never again became pregnant (or so we thought).

We received some suggestions we should just put Shadow in the freezer since she wasn't able to have a calf. We're not particularly sentimental about (most of) our cows, and we will more readily butcher an ornery animal, but Shadow's disposition is sweet and we saw no need to get rid of her without a good excuse.

Besides, even if she couldn't bear calves, she did have a use -- she could keep the bull company during times we didn't want other cows bred. That's why she's been Samson's pen mate for the last few months.

As for how we didn't know she was pregnant... well, some cows, like some women, carry a pregnancy with great subtlety. So it was with Shadow. Never in the past nine months did she look even remotely pregnant. So I repeat, this calf was a complete surprise.

A glimpse of a tiny scrotum -- we have a little boy. 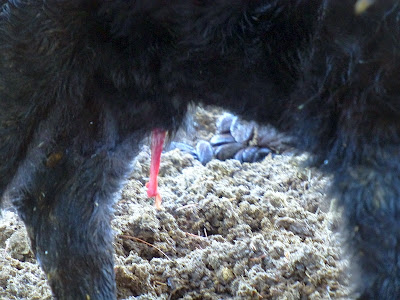 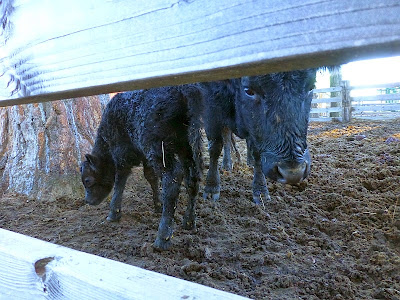 By the time I saw him, the baby was on his feet and nursing strongly. Shadow has shown great attention and promises to be a good mama. 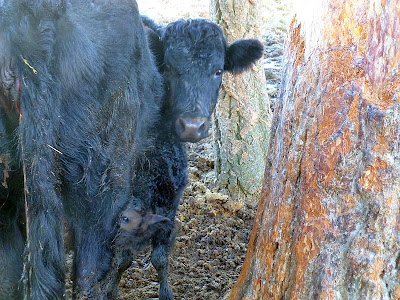 All the other ladies lined up to admire the new arrival. 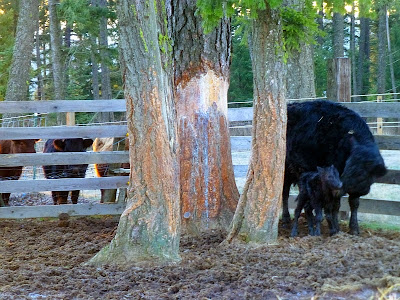 Samson, of course, thought they were lining up to admire him, and he pawed and pranced around like the stud he is. 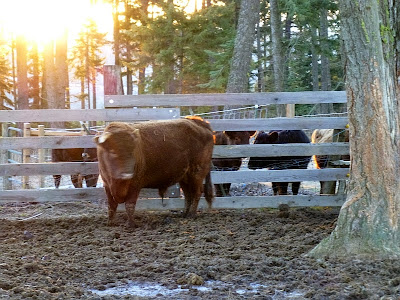 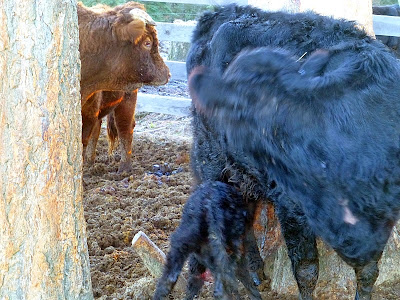 I gave Shadow a little bit of food right where she was, so she wouldn't be conflicted between being hungry vs. staying with her baby. 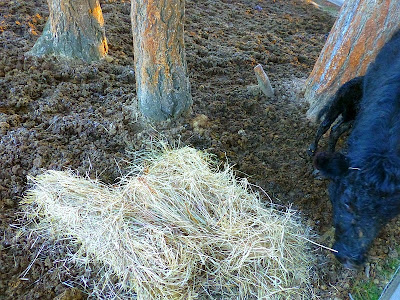 But our priority was to get her and the baby out of the bull pen. 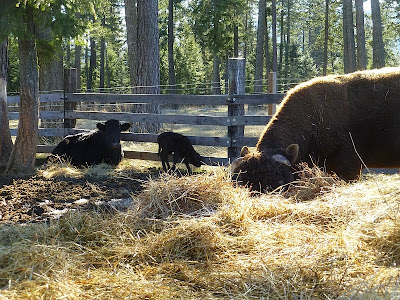 Not because Samson was likely to be aggressive to the calf -- Dexter bulls are pretty good about respecting calves... 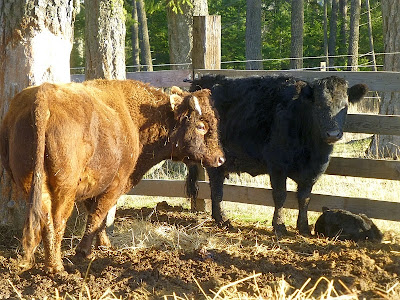 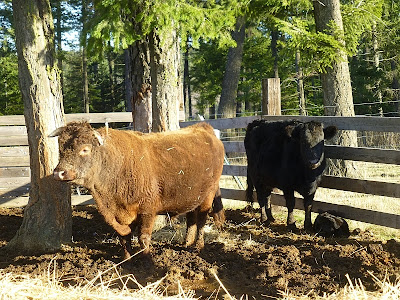 ...but because the bull pen, like the feed lot, has parts that are literally knee-deep in sticky black mud and we couldn't risk the baby getting mired. 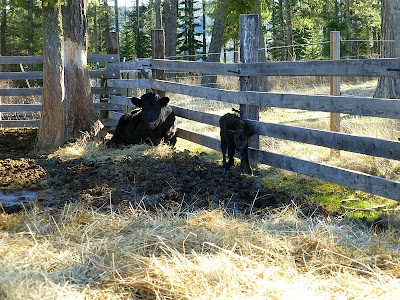 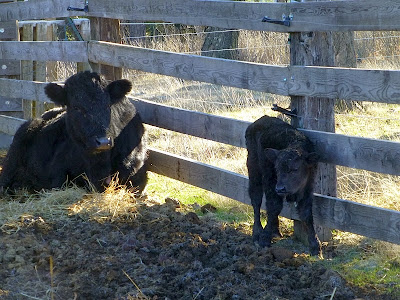 Nor could we turn Shadow out with the rest of the herd. Again it's not because anyone would hurt the baby, but there's mud everywhere.

After some discussion, we decided to confine Shadow and the baby in the hay barn for the time being, at least until we can castrate the baby. Here they would have unlimited food and complete protection from the weather. Although it was chilly this morning, thankfully we're having mild weather with temps in the 40s. 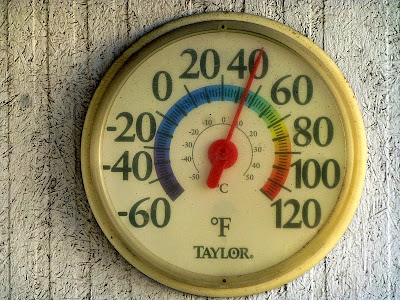 Even in cold weather, calves do fine as long as they have shelter, hay bedding, and a belly full of warm milk.

So after giving Shadow most of the day to recuperate and get used to having a baby... 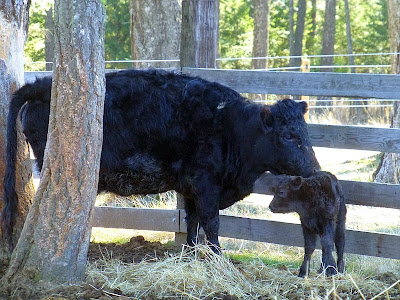 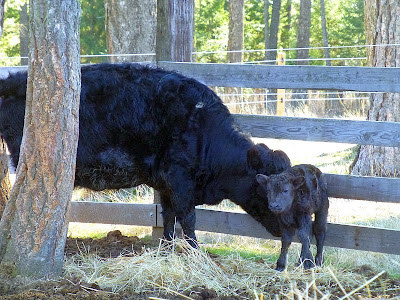 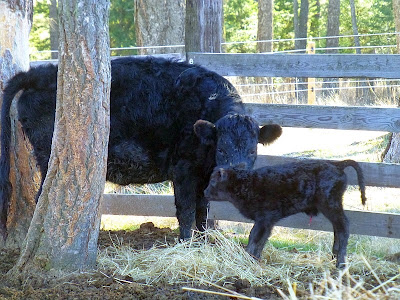 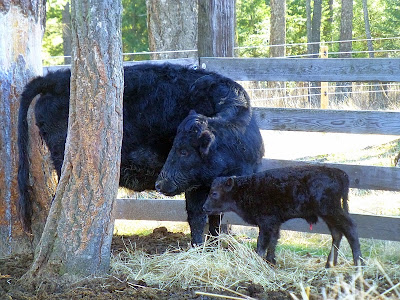 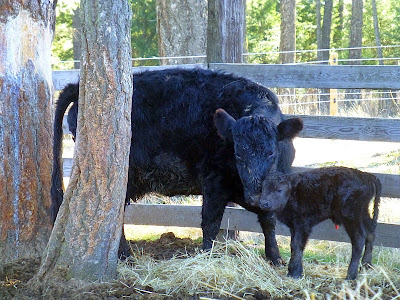 ...we got her and the calf out of the bull pen and shooed another cow in to keep Samson company. It was too dark to take photos by the time we got everyone bedded down, but suffice it to say we blocked Shadow and baby in the barn with cattle panels (which also locked poor little Lucy out, the greedy thing) and filled a tub of water for mama.

I've been smiling the whole day over our new addition. Cows are happiest with calves, and it pleases me that Shadow has one at last.

Now... what shall we name the baby?
Posted by Patrice Lewis at 6:31 AM