This year we had a successful corn crop for the first time in ages. 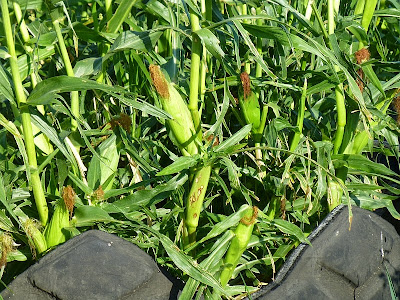 Growing corn has been a huge challenge for us. Our short growing season means we often can't get seed into the ground before early June, and we can often expect the first frost around September 15 or so. Assuming we plant around June 5 and assuming the corn will germinate by about June 10, this leaves less than 90 days for corn to grow, achieve its stately height, pollinate, tassel, and mature. Oh, and it also has to survive the rip-roaring winds we often get here on the prairie.

In years past, we grew the faithful Golden Bantam. At least, we tried to. But Golden Bantam (despite its name) grows tall, over five feet. It also had a germination-to-harvest time of 78 days. In theory this is plenty of time to get a decent yield in north Idaho.

In reality, we had spotty success. Not because the corn didn't grow well -- it did -- but because it often got damaged by the high winds and had difficulty reaching maturity before frost. 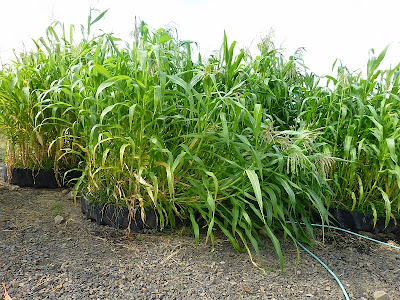 It was also late pollinating and therefore forming ears. This photo was taken September 1 of last year -- about two weeks before we could conceivably expect our first frost. Meaning, waaaay too late to form mature ears before the growing season ended. 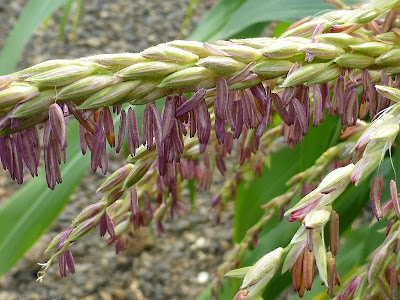 Bottom line, last year we got about ten or fifteen ears of corn out of nine tires. NOT a good yield.

So this year we tried a new heirloom sweet corn variety called Yukon Chief. Developed at the University of Alaska in 1958, it promised 55 days from germination to harvest. Based on these promises, we planted twenty tires on June 6 of this year. 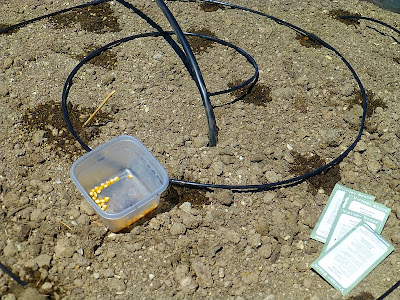 It promptly sprouted and grew vigorously. But it never grew tall. 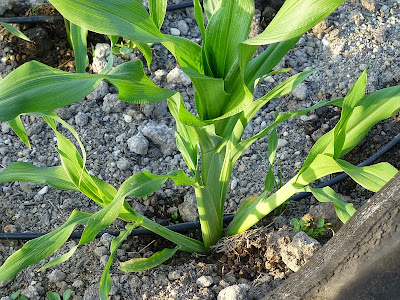 This corn is tough. We had three violent thunderstorms during the summer which flattened it first one direction, then another. All three times it's sprung back upright (well, mostly). That in itself makes me admire it. 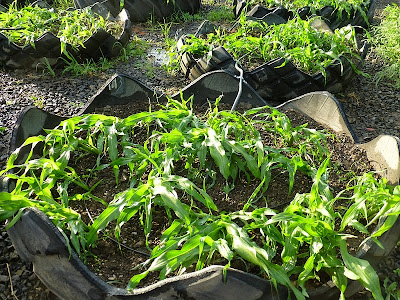 When the corn started tasseling at no more than two feet in height, at first I thought there was something wrong with it. But no, that's just the way it is. It puts all its effort not into height, but into early production. We didn't realize until later this is a huge advantage for us since the corn never got high enough to get irrevocably knocked over by wind, like the Golden Bantam corn did.

And my goodness, did this corn produce. 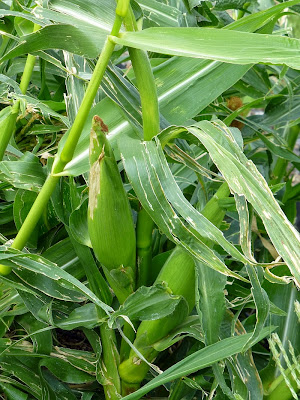 The ears were mature well before September 1 -- bliss!

On August 29, Don, Younger Daughter, and I (Older Daughter was away from home) went out to harvest the corn. I drew up twenty circles (to denote tires) so we could keep rough track of how many ears of corn we got per tire. We went out after the sun had set to avoid the heat of the day. 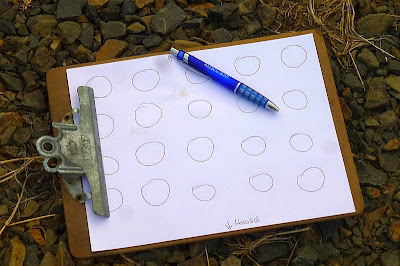 Despite the short stature, the ears were abundant. 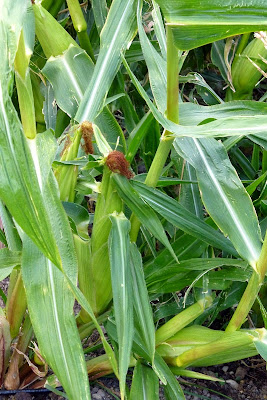 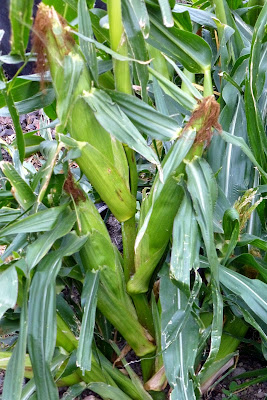 We each took a tire, and counted ears as we pulled them. We pulled both big and small ears (though "big" is relative -- the largest ears were only four or five inches long). 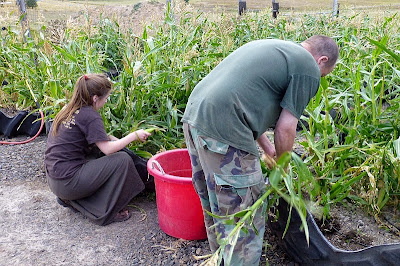 We brought Lydia into the garden with us where she had a grand time exploring. 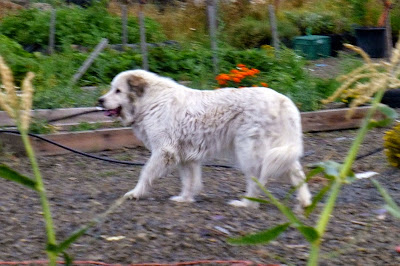 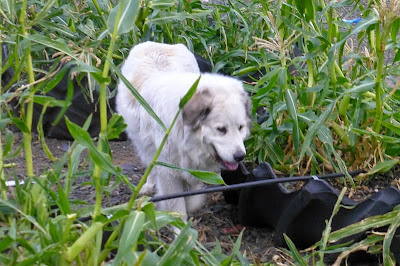 The tubs we brought were soon overflowing... 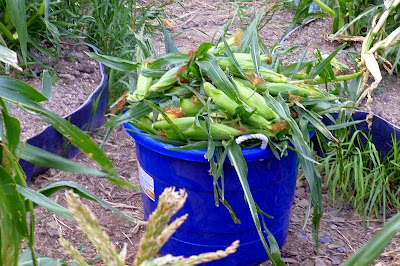 ...so we just tossed the picked ears into piles between the tires. 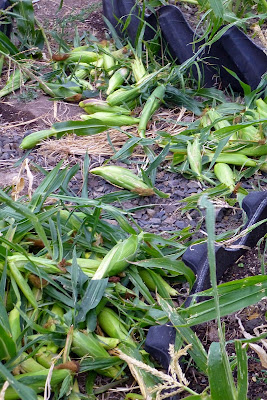 As we filled in the worksheet, it became apparent we were averaging about thirty ears per tire. 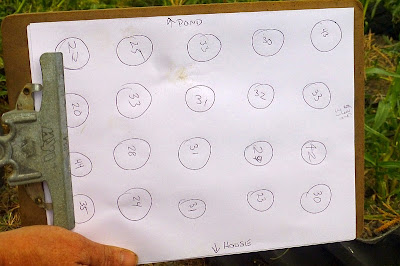 By the time the corn was picked, it was too dark to do anything else, so we left it overnight. The next morning I pulled the corn into dedicated garbage cans (by "dedicated" I mean we keep certain garbage cans for garden use only, not garbage)... 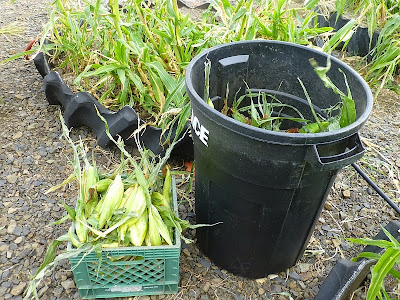 ...and brought all 600 ears or so closer to the house so we could start shucking. 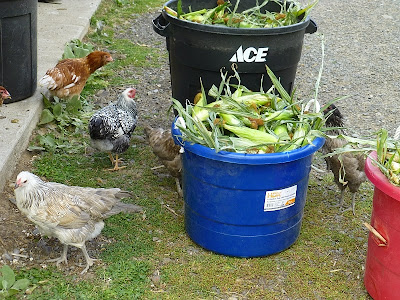 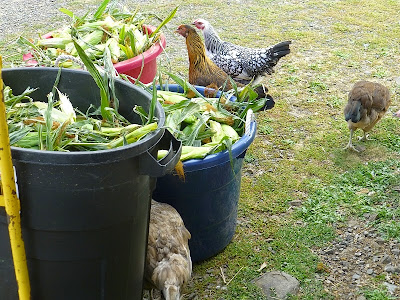 Needless to say the chickens thought this was a terrific idea. 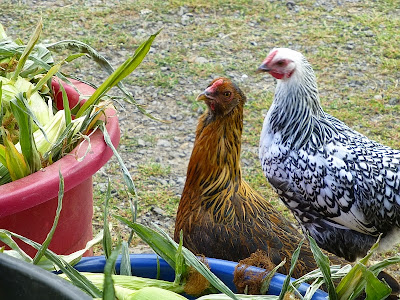 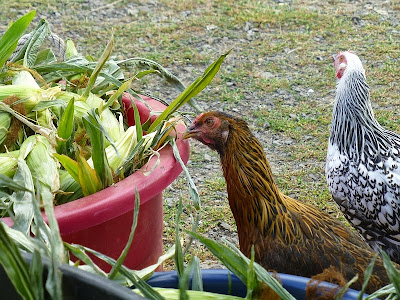 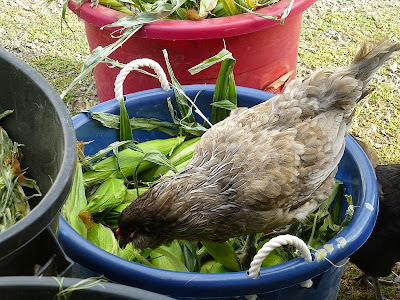 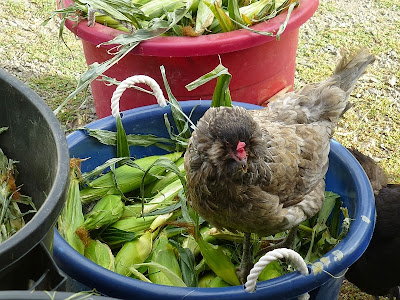 It took a few days to get it all shucked... 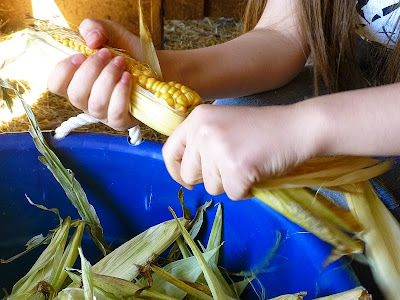 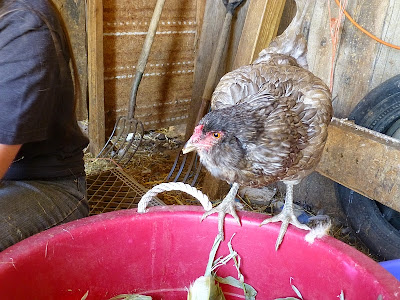 All those ears -- reduced to two bins. 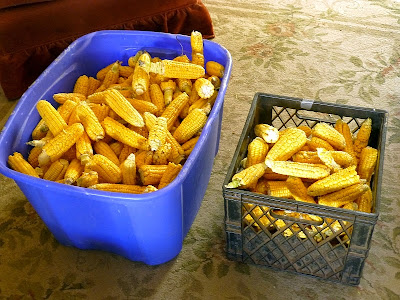 What we didn't eat fresh, we dried. 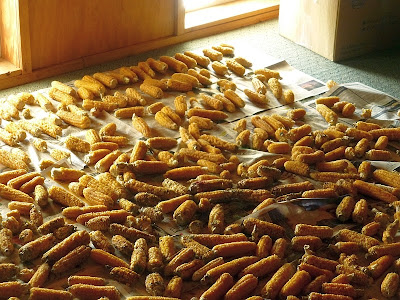 We'll save some for seed, and the rest we'll try grinding and see what kind of cornmeal it makes. I won't bother canning any because I've got so much corn canned up already.

I don't know if we would have gotten higher yields from a different breed of corn. I don't know, because nothing else would come to maturity or withstand the high winds we get. So if I can get 600 ears of corn from 20 tires with this short-season heirloom, you can bet your booties we'll continue to grow it.

We had vague hopes that we could grow enough corn to rough-grind and feed to the chickens, but I realize now we'd have to have at least an acre of corn to do this. However we'll still double the number of corn tires we'll plant next year. It's so nice to have success at last!
Posted by Patrice Lewis at 9:08 AM