Giving up the ghost

After fourteen faithful years of service, our gigantic chest freezer finally gave up the ghost.

This freezer has been an outstanding appliance. As I recall, we bought it in 2000 when Montgomery Wards went out of business. We walked into the rapidly-emptying store during their liquidation process and asked for their biggest chest freezer. I don't remember the price, but we came home with a 24.9 cubit foot Frigidaire. That was when we still lived in Oregon. 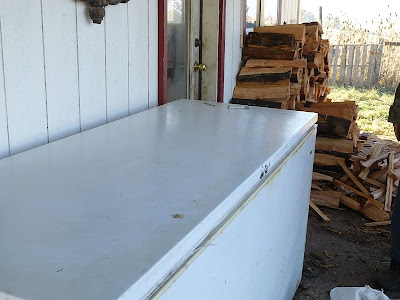 We transported it all the way to Idaho in 2003 (filled with half a cow -- our logic was it was easier to move the cow in the freezer than on the hoof) and since we had no place to set it up inside the house (and since we don't have a garage), we parked it outside on our side porch. We didn't realize this was the wrong thing to do, since this meant it was in full sunlight during the first half of the day. In warmer weather, this made the motor run too hard. Sure enough, in 2008 the motor died. Horrors. But we engaged the services of an appliance repairman, he fixed it up spiffily, and he told us the freezer would last much longer (and run more efficiently) if we moved it to a shady spot. So our chest freezer sat on our north-facing front porch ever since.

Over the years the lid of the freezer started giving us trouble -- the screws were working loose and the insulation was getting wet and swelling, etc. 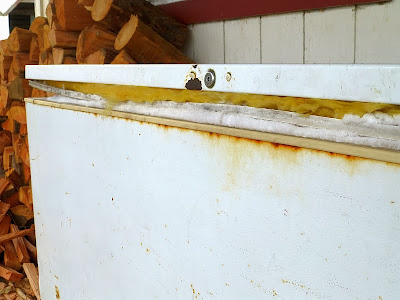 This caused massive ice buildup inside the fridge. Fortunately it happened during winter, so the contents of the freezer weren't compromised (since it was just as cold outside as inside the unit). 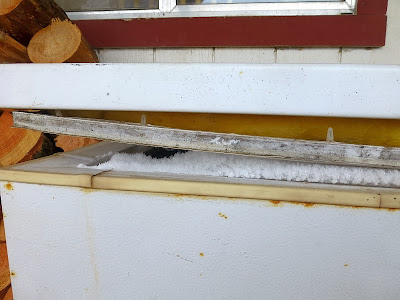 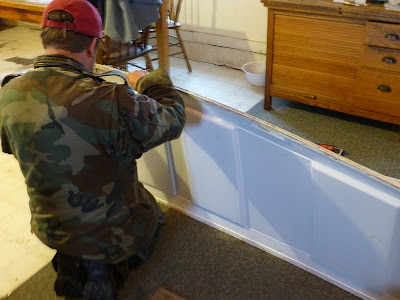 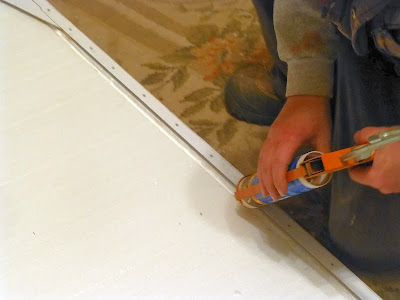 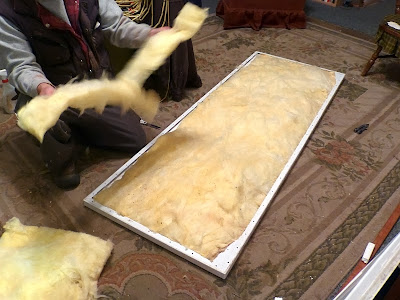 But last week we noticed things were not as "hard-frozen" as they should be. The lid was working fine and the food was still frozen, but it was clear the motor was failing.

We couldn't complain. Fourteen years of hard work -- we certainly got our money's worth. We knew this day was coming and had money earmarked for a replacement freezer.

Phone calls to appliance centers around the area did not yield any freezers of the same size -- at least, not without waiting a couple of weeks -- so for the time being we settled on a "dinged" 16 cubic foot new model.

Here it is, in the back of our truck. 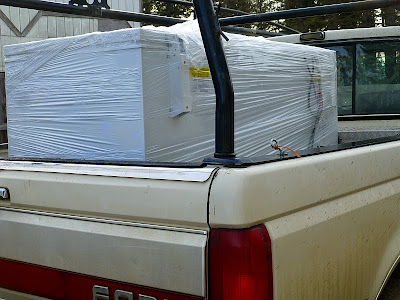 We manhandled it onto the side porch, unwrapped it, and plugged it in. The manufacturer's directions said to chill the freezer before putting anything in it. 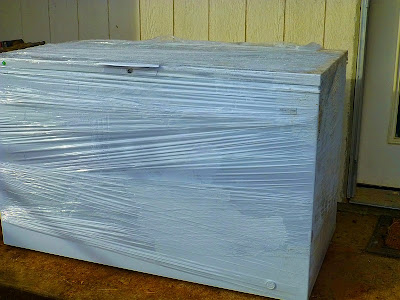 Here are the "dings" it came with. We'll coat this with an anti-rusting agent. 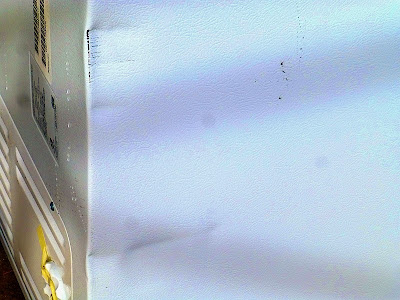 While the new unit chilled, we set about the daunting task of emptying the old unit. Fortunately we're running low on beef (we'll be butchering soon) so what remained in the freezer was beef, the chickens we butchered last summer, lots of garden produce (especially strawberries, some of which are in the photo below), cheese, and things like tortillas, pork (bacon ends, some pork chops, etc.), and a few veggies I haven't gotten around to canning yet. We also discarded the mysterious unlabeled oddities that tend to fossilize in freezers. 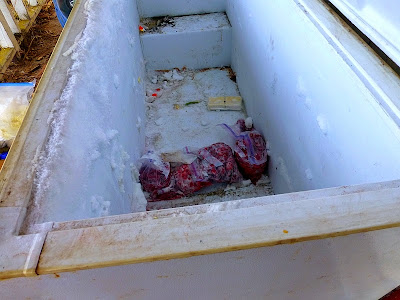 After it was empty, Don and I manhandled the old freezer off the porch... but then were stuck with how to move it into the barn. You see, we have plans for the old freezer. Don did some volume calculations and determined it will hold about 1000 lbs. of chicken feed. It's long been our desire to buy chicken feed in bulk (it's much cheaper that way) but we were stymied with where to store it, since it would need to be moisture- and rodent-proof. The old freezer will be ideal for that purpose. After some discussion, we decided to put the freezer in the barn. But how to move it that far?

Tractor to the rescue! In addition to Don having an excuse to play with his new toy, it was the absolute best solution to moving the heavy unit without killing our backs. 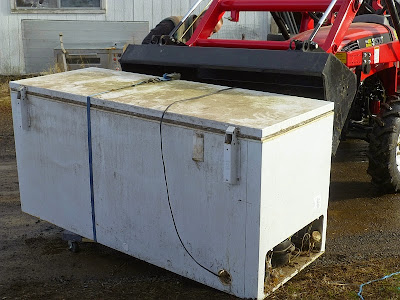 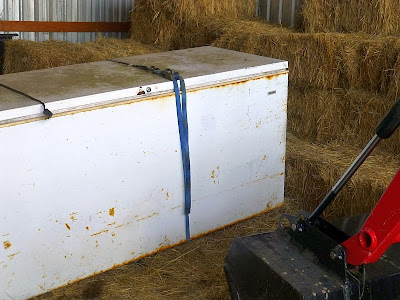 We didn't want to move the new freezer using the tractor, of course -- too much danger of damage -- but we couldn't figure out how to move it from the side porch to its permanent location on the front porch. Don (brilliant guy that he is) finally rigged up a method of two loops of straps, one at either end, with a long iron pole to lift. We each hoisted one end of the pole and easily carried the freezer to where it needed to go.

This freezer has a lid that stays open without the need of a stick to prop it up, and it has an internal light (whoo-hoo!). Right now it's packed to the gills... and as I said, we have two animals slated for butchering soon. Since we still have money in our freezer fund, we'll buy a second unit in the near future and use it for beef. 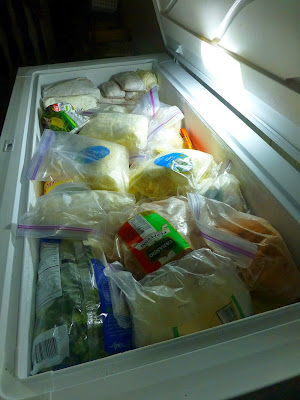 Having two smaller freezers instead of one larger freezer is probably a better idea anyway, since if one unit dies we can prioritize and keep things frozen in the second unit until we can get a replacement.

Of course we've thought about what we would do in the event of a long-term power outage. The most valuable thing in our freezer is beef and other meats. The units would stay cold long enough for me to can everything up. Our stove is propane and does not have an electric start, so it works fine in a power outage. I would be canning round the clock, but we wouldn't lose much. I also keep about six dozen of quart jars empty and on standby in case of a freezer emergency.
Posted by Patrice Lewis at 6:42 AM

Email ThisBlogThis!Share to TwitterShare to FacebookShare to Pinterest
Labels: freezer