On Sunday, the girls and I attended the third annual Sustainable Preparedness Expo in Spokane.

We got there in the early afternoon. On the way into the building, we noticed this snappy bumper sticker... 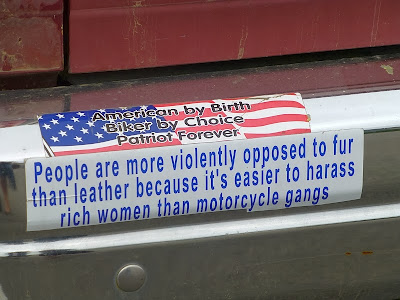 ...which, we were forced to admit, held a lot of truth.

The first thing we looked for at the expo was the booth for our friends Paratus Familia. It was impressively thronged, so we just stopped to say hello before walking around. 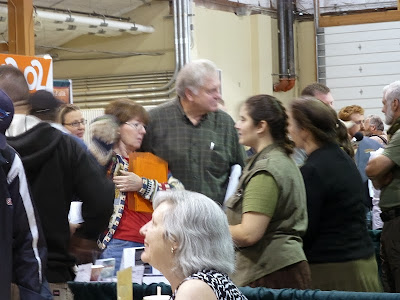 I bumped into another friend -- in fact, the woman who made my bra holster (and yes, I was packing heat, now that I'm legal to do so in Washington) -- and together we attended a workshop called The Plan to Plant, given by a West Virginia agriculturalist who outlined what was necessary to grow ALL one's own food. 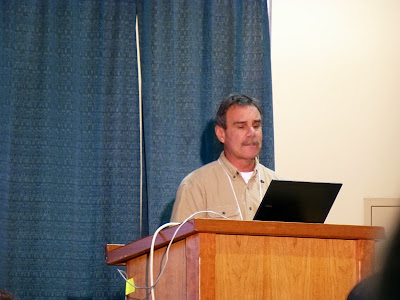 Despite the fact that the acoustics were absolutely horrific in the large and echo-y exhibit hall, this seminar was jam-packed. Here's a portion of the audience. 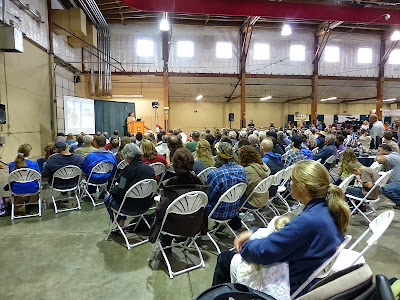 The large attendance at this, and every other, workshop underscored a major thing I notice whenever I attend one of these expos: people are HUNGRY for knowledge. They know something's wrong -- with our government, with the economy, with their vulnerability when it comes to empty grocery store shelves after any disruption -- and they want to learn more about how to help themselves.

And let me tell you, every aisle was packed, every booth was thronged. There were a number of booths where I wanted to get some information, but I couldn't do much more than take a business card or brochure because the booth operators were far too busy talking with others. I was glad to see it. 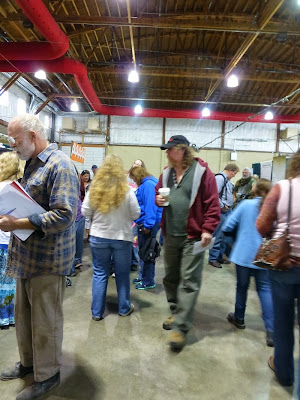 This is Dave Westbrook who runs a business called Country Living University, which teaches people how to start an information-based rural business. 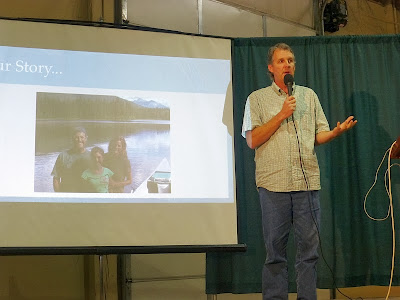 I heard him speak last year and was so impressed with his workshop that I approached him about interviewing for a Backwoods Home Magazine article. He agreed, but our respective schedules wouldn't permit us to get together (he lives several hours away). We touched base again at this expo and, since I have the go-ahead from the magazine for the article, I hope to interview him shortly.

There was a third workshop I wanted to attend -- about putting sustainability into preparedness, which I think is an important component -- but the girls were absolutely dragging. The little party animals had been out until 11 pm the night before attending a birthday party for a friend and were practically asleep on their feet, so we left before the seminar.

I really, really like the trend of putting on preparedness expos. More and more people are waking up to the fact that our economy is not as stable and trouble-free as they've been led to believe. It encourages me to see people actively seeking information on how to help themselves.
Posted by Patrice Lewis at 9:30 AM